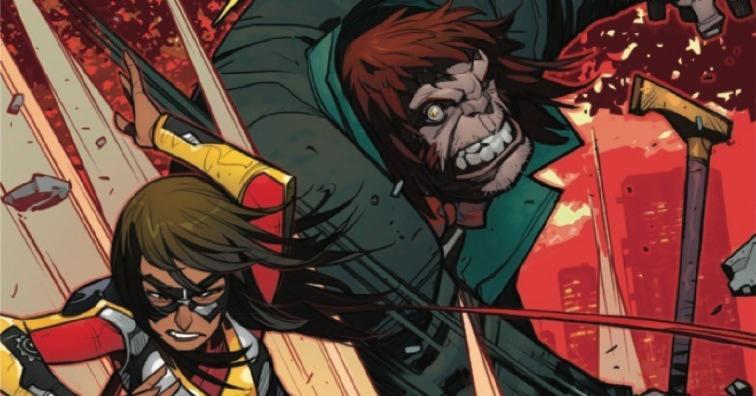 Nowhere To Hide In The Magnificent Ms Marvel #10

Nowhere To Hide In The Magnificent Ms Marvel #10
Edge-Of-Your-Seat Storytelling
The Magnificent Ms Marvel #10 keeps you on your toes, switching back and forth between two suspenseful events: the surgery and the fight. While the situations are quite different, both of them grasp you and won't let go. Kamala thought Hyde was her only obstacle, but Stormranger could pose an even bigger threat. How will she defeat the suit that helped her take down Hyde? I'm so excited to see how this plays out!
PROS
CONS
98
SPECTACULAR!

With Bruno’s love and support, Kamala races after Hyde but what is she really running into? And with her father undergoing potentially life-saving surgery, did she make the right decision? From Saladin Ahmed, Minkyu Jung, Juan Vlasco, Ian Herring, and Joe Caramagna comes the next dramatic installment, The Magnificent Ms Marvel #10!

Family and Foes in The Magnificent Ms Marvel #10

The Magnificent Ms Marvel #10 opens on Kamala following Mister Hyde to a park. They fight and Kamala saves a passerby who comes to investigate before Hyde runs off again. Back at the hospital, Aamir searches for Kamala and runs into Bruno. To cover for her superhero antics, Bruno tells Aamir about their kiss. While Aamir sympathizes, he still doubts that his parents would approve of Bruno and Kamala dating. Nevertheless, he sends Bruno to find Kamala, who has found and confronted Hyde again.

During the fight, Kamala accidentally reveals her weakness, electricity, and Hyde shocks her several times. Just when he’s about to go in for the kill, Kamala’s suit heals her. Rejuvenated, she beats him into submission. But even though Kamala knows she’s won, her suit forces her to keep pummeling Hyde. Kamala fights the suit and expels it from her body. But instead of returning to bag form, the suit takes humanoid form and ominously initiates “threat elimination”.

Like the last issue, The Magnificent Ms Marvel #10 focuses on Kamala’s internal struggle and relationships with loved ones. Even though Kamala isn’t physically with her family and Bruno, they remain her main motivation. By stopping Hyde, she keeps her neighborhood safe but more importantly, she gets to go back to her family. As Strange points out, Kamala’s Inhuman DNA gives her these powers. This same DNA causes disease in her father, but Strange says that Yusuf’s connection to his daughter could also save him. We nearly saw Aamir get powers but the procedure didn’t stick. Could Strange’s surgery have some lasting Inhuman-related side effects?

Speaking of Aamir, his conversation with Bruno isn’t very encouraging. As he has previously expressed, Aamir doubts that his parents would accept this new relationship. While I hope they accept it, I’m also glad that Ahmed isn’t glossing over this issue. In fact, I would like to see the struggles of interracial couples explored through Kamala and Bruno’s relationship. We’ve seen Kamala have crushes, but an actual relationship would be new territory. I’ve always enjoyed seeing Kamala deal with the everyday struggles of being a teenage superhero. I’m sure she’d have some great insight on starting a relationship.

So maybe the suit isn’t as tuned into her emotions as I initially thought. Still, I wasn’t surprised when the suit once again took things too far. In The Magnificent Ms Marvel #10, it even has its own cool supervillain name: Stormranger! So far, this is one of the only times we’ve heard the suit “speak”. It still sounds pretty robotic but it also clearly has a mind, and now a physical form, of its own. I wonder if Stormranger will develop more of a personality and become a full-fledged villain or remain a malfunctioning piece of tech. Either way, I look forward to seeing it as an antagonist.

Kamala spends most of The Magnificent Ms Marvel #10 in pursuit of and fighting against Mister Hyde. As always, Jung does a great job of showcasing Kamala’s powers. In this issue, she stretches her neck so she can search for Hyde, makes herself a net to catch the passerby, and molds her head into a horn to ram into Hyde. I also like how she glows when the suit rejuvenates her, making her look like a white flame. It calls back the imagery from former issues of Kamala being a light surrounded by darkness. However, this time the light evolves into something else.

One of my favorite visuals in this issue is the reveal of Stormranger at the end. The armor takes on a monochromatic blue color scheme. It also takes on Kamala’s hairstyle in white, a sharp, spiky mouth, and piercing white eyes. The effect is quite ghostly and sinister while also evoking the hologram we saw of the original Destined One. Regardless of how long it sticks around, Stormranger is one snazzy evil suit.

In The Magnificent Ms Marvel #10, Kamala takes down Mister Hyde through wit, determination, and some help from her suit. But now, she’ll have to face the same suit that just saved her life. We haven’t even seen the full extent of the suit’s abilities yet. Will her natural powers be enough to beat it? Will her family accept her and Bruno’s relationship? Can Doctor Strange save Kamala’s father? We’ll find out next time in The Magnificent Ms Marvel #11!