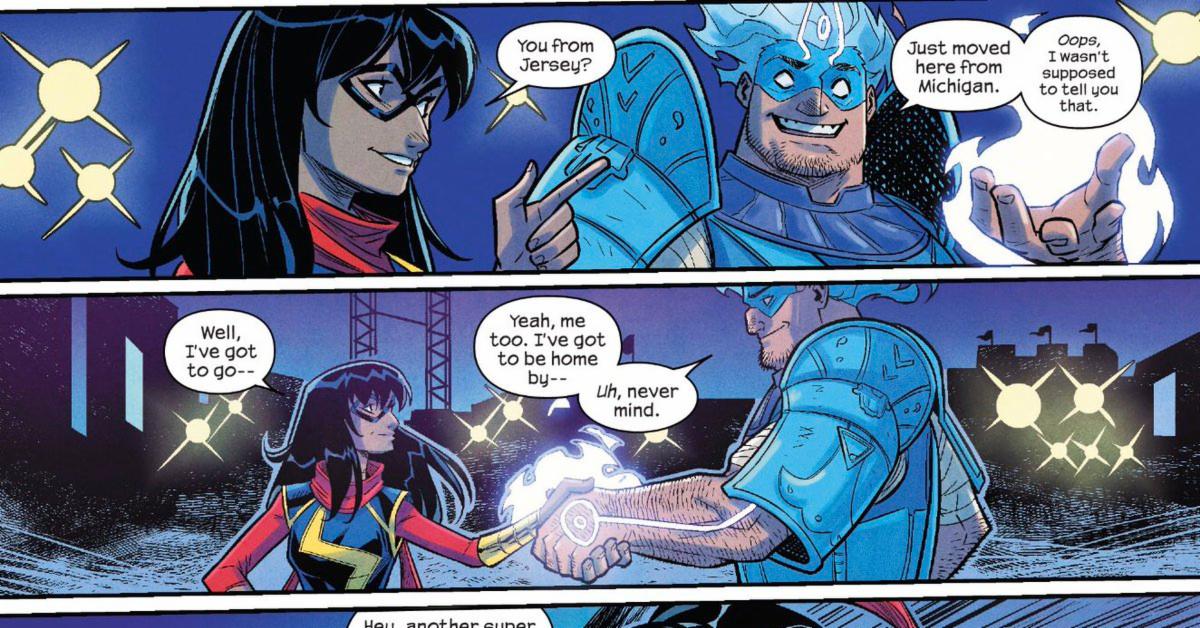 Now that her father’s health has improved, Kamala’s life can return to normal. Normal, however, continues to evade Kamala. So when she and her friends decide to go to the county fair, things don’t go to plan. From Saladin Ahmed, Joey Vazquez, Juan Vlasco, Ian Herring, and Joe Caramagna comes a brand new adventure, The Magnificent Ms Marvel #13!

A Day At The Fair In The Magnificent Ms Marvel #13

The Magnificent Ms Marvel #13 sees Kamala taking a day off with Bruno, Nakia, and Zoe. Frustrated with having to keep their relationship a secret, Bruno leaves early. Not wanting to spoil her day off, Kamala stays at the fair. The girls enjoy themselves until they visit a fortune teller and a demon crawls out of her crystal ball.

As always, Kamala springs into action but she can’t seem to defeat the multiplying monsters. Suddenly, a new hero named Amulet enters the fight! He explains that the demons must be coming from a cursed object and together, they destroy the crystal ball. After their victory, they both hurry to make it home before their respective curfews.

The Magnificent Ms Marvel #13 introduces us to another teenage superhero, Amulet. The new character, Fadi Fadlalah, is an Arab-American from Michigan and appears to have magic-based powers. Additionally, he incorporates a Nazar into his costume, an Arabic symbol meant to ward off the evil eye. In several Asian and African countries, people often make amulets featuring the Nazar. This is likely where Amulet got the inspiration for his name. We don’t know much about him yet, but he seems pretty nice so far. I’m really excited to learn more about his story and how he fits into the next arc!

In The Magnificent Ms Marvel #13, Kamala silently deals with the fallout of her past decision. While she did save Josh’s life, she still blames herself for her father’s situation. At the same time, her father’s near-death has made him re-evaluate his relationship with Kamala. At the end of this issue, he admits that she is growing up and might deserve a little more freedom.

This new change in attitude makes me wonder what he would think if he rediscovered Kamala’s double life. Perhaps he would be more supportive the second time. But with teen superheroes about to become illegal, maybe he wouldn’t approve.

Once again, Kamala and Bruno’s relationship comes to a halt and even they aren’t sure why. While I can understand things being awkward as they transition from best friends to a couple, the delays are getting tiresome. Nevertheless, there could be a few reasons why Kamala keeps hesitating. For instance, this is Kamala’s first relationship and she probably doesn’t know how to proceed.

First relationships are scary enough without getting anyone else involved. And since they’re already hiding their relationship from Kamala’s parents, why tell anyone else? Whatever the reason, I hope they resolve this soon.

The Magnificent Ms Marvel #13: The Evolution of Kamala

As always, Kamala has to don the suit even on her day off. Reading this issue, it’s easy to see how her outlook on her double life has evolved. In the beginning, Kamala was just happy to help her city. She did take a break from superhero antics for a while but she came back to it with gusto. When her father almost died, it became much more of a burden because it was keeping her from her family. Now, it looks like she’s starting to find it fulfilling again despite what it costs her. I’m really interested to see how she’s going to feel when teen superheroes become outlawed.

Artist Joey Vazquez returns for The Magnificent Ms Marvel #13 and he does a great job. There’s so much detail in the fair and Kamala’s fight scenes are excellent as usual. But the highlight has to be Saladin Ahmed and Sara Alfageeh’s Amulet.

As I mentioned before, his costume features a Nazar symbol. The most prominent one is on his chest piece but you can also see the symbol on the back of his hands and on his magic shields. Like other magic users, his hands glow when he uses his powers. I also like his fiery blue hair and how it blends into his mask. Overall, Amulet looks pretty awesome.

Trouble On The Horizon

The Magnificent Ms Marvel #13 brings us out of the last arc and into the next. While Kamala feels guilty about her father, she still saves the day and even makes a new friend. But with an impending ban on teenage superheroes, Kamala’s life is about to go off the rails again. Will she and Bruno work things out and tell their friends about their relationship? What will she do when her superhero antics become illegal? We’ll find out next time in The Magnificent Ms Marvel #14!

The Magnificent Ms Marvel #13 by Saladin Ahmed, Joey Vazquez, Juan Vlasco, Ian Herring, and Joe Caramagna
Best Foot Forward
This issue come in between two big story arcs but it still manages to feel fresh and entertaining. The artwork is beautiful and I really like Amulet's costume design. While there are lasting consequences from Yusef Khan's illness, it's good to see that the Khans are still moving forward. I'm also really interested to see how the next arc will affect Kamala's family since her parents haven't rediscovered her double life and Kamala's own relationship with superhero antics has evolved so much. And although I can understand the possible reasoning behind Kamala and Bruno stalling their new romance, I hope that they can also continue to move forward.
92
Teamwork!