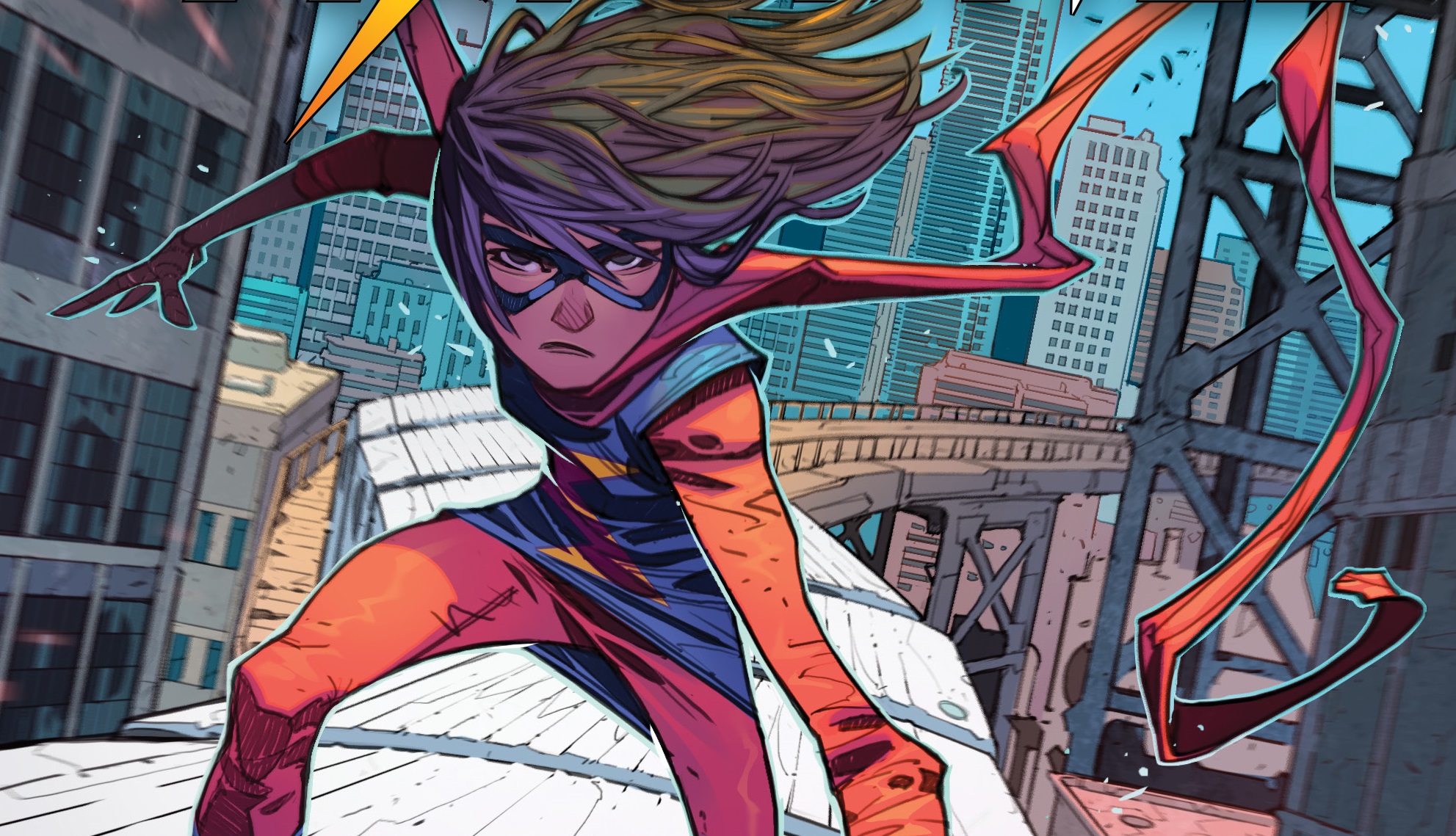 Kamala Khan returns with a new creative team! What strange foes will she face off with this time? From Saladin Ahmed, Minkyu Jung, Juan , and Ian Herring come Kamala’s newest arc, Magnificent Marvel #1!

Trouble At The Khans’

Magnificent Marvel #1 opens in the future with an alien telling his child a bedtime story. It is about Ms. Marvel, who he refers to as “The Destined One.” The story then transitions into the present day with Ms. Marvel fighting the villain Deathbringer. She easily defeats him and runs off. At home, she finds out that her mother told her father about her double life. While he understands that she wants to help people, he also needs to protect her.

Thus, he forbids her from being a superhero, but Kamala refuses to listen. When Bruno texts her about a monster attack at work, she goes against her parents’ wishes. Again she easily beats the strange monsters which turn into goo, but Bruno detects another attack at her home. Kamala rushes back and is horrified to see her parents also turning into goo.

Magnificent Marvel #1 finds the balance between humor, drama, and quirkiness that characterizes Kamala Khan. While I do miss Kamala’s inner monologue, I appreciate the ironic humor of the alien narration. I also love her occasional jokes during battle. Like many of the foes Kamala has faced, this one is already very odd. These strange, armor-clad animals must have been sent by some evil genius, but who could it be? Besides, the villain kidnapped her parents and replaced them with gooey copies, meaning they probably knew her secret identity. Could this be the return of the Inventor or Doc.X or is this a completely new foe? Either way, I want to know more!

As for the drama, I found her parents’ reactions rather typical. We’ve seen many instances of parents forbidding their teenagers from being superheroes. Since Kamala’s mother supported her in the past, I was disappointed to see her suddenly change her stance. However, it’s completely understandable for a parent to want to protect their child. Plus, there’s clearly something else going on with Kamala’s father that might explain more. Overall, I thought the tone and Kamala’s characterization were both spot on. This is also a good place for new fans to jump in.

As expected with the start of a new arc, Magnificent Marvel #1 leaves us with several questions. What was Kamala’s mom trying to tell her about her father? What happened between Kamala and Bruno yesterday and why doesn’t she want to talk about it? How will Kamala become an intergalactic legend whose story will be told by aliens in the future? I’m so excited to find out!

The artwork in Magnificent Marvel #1 feels very classic. The colors are vibrant and bold, both in Kamala’s costume and in the background. The solid color backgrounds really enhance the more emotional moments between Kamala and her parents. I additionally liked the borders around the flashback sequences, evoking the Terrigen mists that gave her power/s.

I love how seamlessly they depict Kamala growing and shrinking while she fights. In fact, every fight scene was fun to look at and made good use of her polymorph powers. Finally, Kamala’s facial expressions were especially great. Even though her mask covers her eyebrows, Kamala’s emotions are always clearly written across her face.

Based on this issue, I think Kamala is in good hands. I’m excited to see where this new story takes her both physically and emotionally. I want to know who’s sending these weird goo creatures. I want to see how her relationships with her family and friends evolve. And I want to see more of this amazing artwork. So what are you waiting for? Go pick up Magnificent Marvel #1!

Magnificent Ms Marvel #1 by Saladin Ahmed, Minkyu Jung, Juan Vlasco, and Ian Herring
The Start of Something Beautiful
It was a solid start and a great place for new readers to jump in! The art looks great and the action is incredible. I can't wait to see where the story goes and how Kamala evolves as a character. Congratulations to the new team!
PROS
CONS
93
Magnificent!