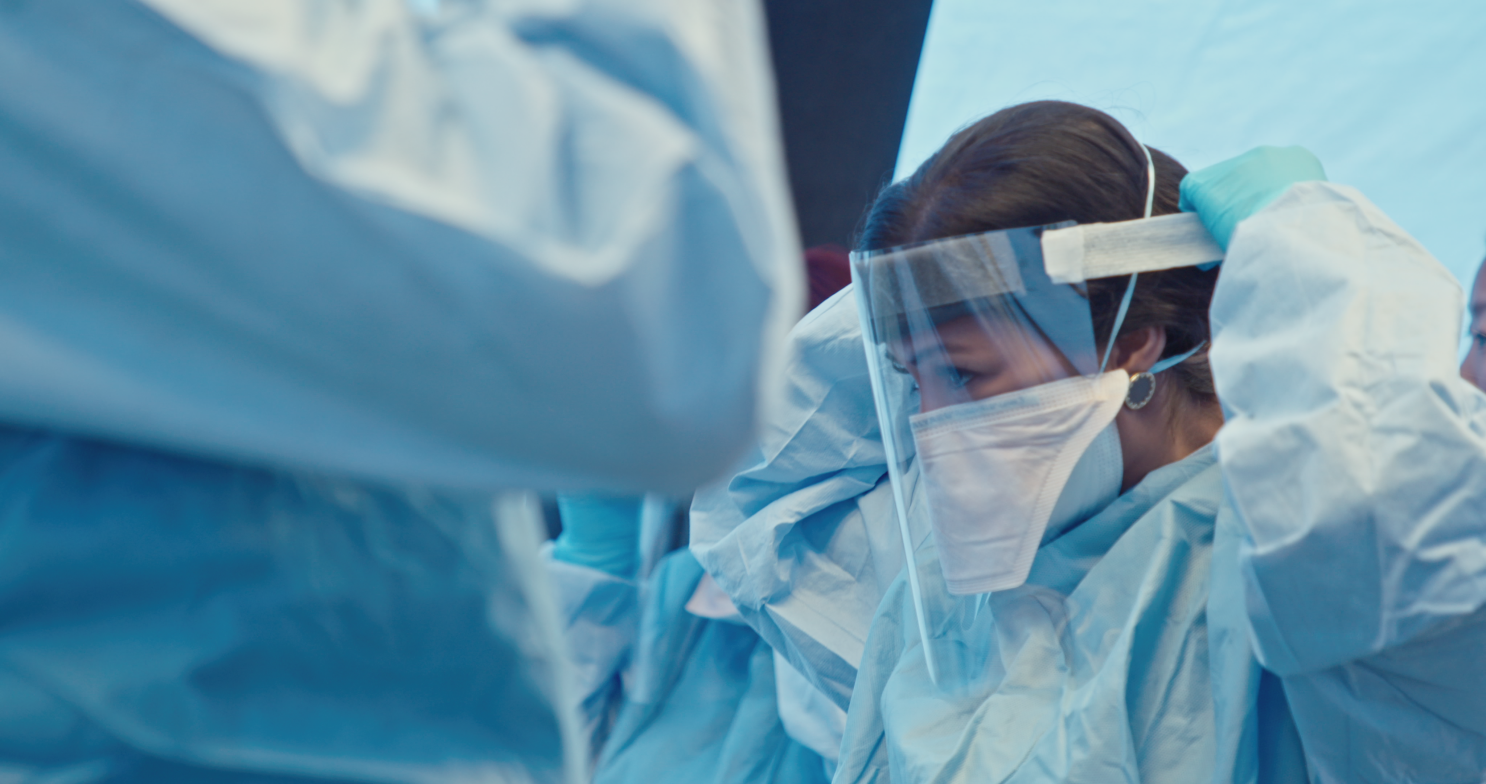 Netflix’s Pandemic Is Uncannily Timely: What Lessons Can We Learn?

There is no denying that the current state of events is beyond unimaginable and heartbreaking. No one expected 2020 to progress the way it has so very quickly, with knock after hard knock. The COVID-19 pandemic has altered the entire world’s lives in as little as 2 months, both surprisingly and uniquely. Yet Netflix released the docu-series Pandemic: How to Prevent an Outbreak on January 22, and its subject is as relevant to this very moment as if the series was released a week ago.

Netflix’s Pandemic follows a number of doctors and scientists, all specializing in combating disease. An often-repeated sentiment as the series progresses is not if, but when. They warn that a new deadly viral outbreak is imminent, and even more foreboding, it’s only a matter of time. The COVID-19 outbreak is still going strong despite concentrated efforts of champions against viral disease. So, why, with all of the professional knowledge on our side, have we still found ourselves in this horrible event?

Filmed over the 2018-19 flu seasons, Netflix’s Pandemic introduces us to people in various fields of science and medicine. Some specialize in preparation and prevention, and some are at the front lines treating those of us who fall ill. Viewers take an intimate look into their lives and the measures that are being taken to fight and prevent outbreaks.

The series illustrates the plight of smaller communities and marginalized people, who experience the worst havoc a pandemic wreaks. Featured in the series is Dr. Holly Goracke, the one and only doctor at a small hospital in rural Oklahoma. Goracke struggles to run the entire hospital with low funding due to a lack of state support. Viewers see her 24 hours into a 72-hour shift as she awakens in her own room within the hospital. Goracke expressed concern about the possibility of a pandemic, stating,

“I don’t have every resource that a large hospital has. I honestly have no idea what I would do in a situation like a pandemic.”

Later, Dr. Dinesh Vijay of Santokba Durlabhji Memorial Hospital and Medical Research Institute in Rajasthan, India is shown treating patients who have the Swine Flu. Vijay states that he treats an average of 1000 patients a day in close proximity, with very limited resources. Too many hospitals face similar struggles, sometimes even resulting in closures. In the U.S. alone, 128 rural hospitals have closed since 2010.

Beyond resources, training is essential to ensure that healthcare workers are prepared to prevent and control the spread of disease. Dr. Syra Madad, senior director of the Special Pathogens Program at New York City Health and Hospitals, first appeared to be overseeing realistic simulations aimed at preparing the city’s hospital staff for infectious outbreaks. In a flurry of focused movement, the staff executed procedures for properly donning personal protective equipment and setting up isolation zones. Madad stresses that prevention and training are key to ensuring that should an outbreak occur, it may be contained.

The influenza virus is zoonotic and mainly spread by birds. Scientists regularly track and research virus sources to prevent transmission. Pandemic shows Dr.Ghazi Kayali, Co-Founder of Human Link, and Deb Carter, a wildlife researcher, conducting field tests on avians for viruses in their system ahead of flu season. The two researchers explain the importance of surveillance studies; to see trends and avoid transmission from animals to humans. Dr. Dennis Carroll, director of the United States Agency for International Development’s Emerging Threats Unit, explained that factors that contribute to the threat of potential pandemics include the world’s increasing population, as well as our spread into areas of wildlife that have been previously unencroached.

“The thing about controlling a deadly virus is you need to move from being reactive to proactive. So you don’t wait for an outbreak to infect humans, you find it and you fight it before it ever infects a person.”

The irony is that we weren’t able to fight it. The outbreak hit and grew exponentially, from 580 cases in January worldwide to over 78,000 a month later. So if the proactive minds of Netflix’s Pandemic predicted this outbreak, why were we as a society so under-prepared?

Why Weren’t We Prepared?

Realistically, there can be an infinite number of reasons as to why we are living in this tragic reality. Netflix’s Pandemic’s message demonstrated a few definitive causes in retrospect. An issue woven throughout the Pandemic was the fact that the majority of professionals complained of a lack of funding. The government has continuously slashed and dashed the budget for science and health programs over the past four years. This has resulted in a significantly weaker ability to respond to outbreaks such as COVID-19.

Netflix’s Pandemic demonstrates the direct results of low-funded programs: Goracke, stretching herself thin as the sole doctor of a hospital; Susan Flis, a retired nurse volunteering at a border monastery to give migrants flu shots since no one else will; and Dr. Madad, a woman who has made it her life’s work to prepare New York’s hospitals for an outbreak.

“Finding the funds to do this work is a constant part of my job,” Madad said. “If we can’t keep up with this training and maintaining readiness in general, then we’re risking more lives.”

Of course, strongly supported science and health programs are only one aspect of a healthy society. The people themselves, too, contribute to the population’s overall preparedness. Dr. Michel Yao, Program Manager for Emergency Response at the World Health Organization, faced both misinformation and opposition while risking his life for months in the Democratic Republic of the Congo to stop the spread of Ebola.

To give an opposing perspective, Netflix’s Pandemic features Cayla Wagner, an Oregonian mother of five home-schooled children, none of whom are vaccinated. In the midst of a measles outbreak, Wagner is participating in activism against the proposed House Bill 3063. The bill would make vaccination laws in the state stricter by removing parents’ ability to decline vaccinating their children. At the time of the docu-series’ filming, the World Health Organization included vaccine hesitancy as one of the top 10 threats to global health.

The Ruse Of Permanence

Lack of funding for our health and science programs and distrust of science are both large factors that contributed to our current state of affairs. Yet another factor is that Netflix’s Pandemic touches upon an unintentional constituent. One that takes root within the human psyche. We rely too heavily on the idea of our permanence. Dr. Carroll illustrates this idea perfectly as he walks through the ruins of the once-robust ancient city of Rome, Italy.

“The very idea that their civilization wasn’t a permanent civilization was something they would never have grasped,” Carrol said. “All things must pass. To avoid the worst consequences of change, we’re going to have to change the way we live on this planet.”

The Light At The End of Pandemic

The experience of watching a docu-series filmed a year ago practically mimic what is happening in the real world is nothing short of harrowing. Since everything the doctors and scientists state has occurred exactly as they predicted, one can’t help but feel as though the effect of the series is lost. Yet a pleasant reprieve from this feeling comes from the work of Dr. Jacob Glanville and Sara Ives in Distributed Bio. Glanville, Founding Partner and Principal Scientist, is working on a possible one-time universal vaccine for various strains of influenza.

“I wanted to create a space where innovation and a willingness to not be trapped by the past would allow people the bravery, or the foolishness, to try something new that hadn’t been tested before,”

“If you receive a vaccine for flu on any given year, you get some protection and it lasts a little while but the virus keeps mutating and making your vaccine obsolete,” Glanville said. He went on to explain that their strategy is to formulate tests that will teach the immune system to respond to previous strains of the virus, adapt, and fight off future viral strains.

“Our goal here is to create a flu shot so that within a decade, we’re looking back and we think of flu as a disease of the past.”

By the end of Netflix’s Pandemic, Glanville and Ives had run successful initial tests on the beginning stages of the vaccine, then later received news that they would receive a grant from the Bill & Melinda Gates Foundation, which would fund clinical human testing and progress the vaccine even further. The irony, of course, is that the outbreak cut their work short, in a sense.

Since the outbreak of COVID-19, any and all efforts from the featured professionals have been re-geared toward the virus. Glanville recently stated that Distributed Bio is developing a treatment to neutralize coronavirus, which could work as a short-term vaccine. The U.S. military will test the vaccine, and following human trials, it could be ready by September at the earliest.

Now! How About A Breather From Pandemic?

It’s safe to say that coverage of the pandemic can become pretty exhausting after a while. Why not take a mental breather with a few of these, non-corona-themed articles?