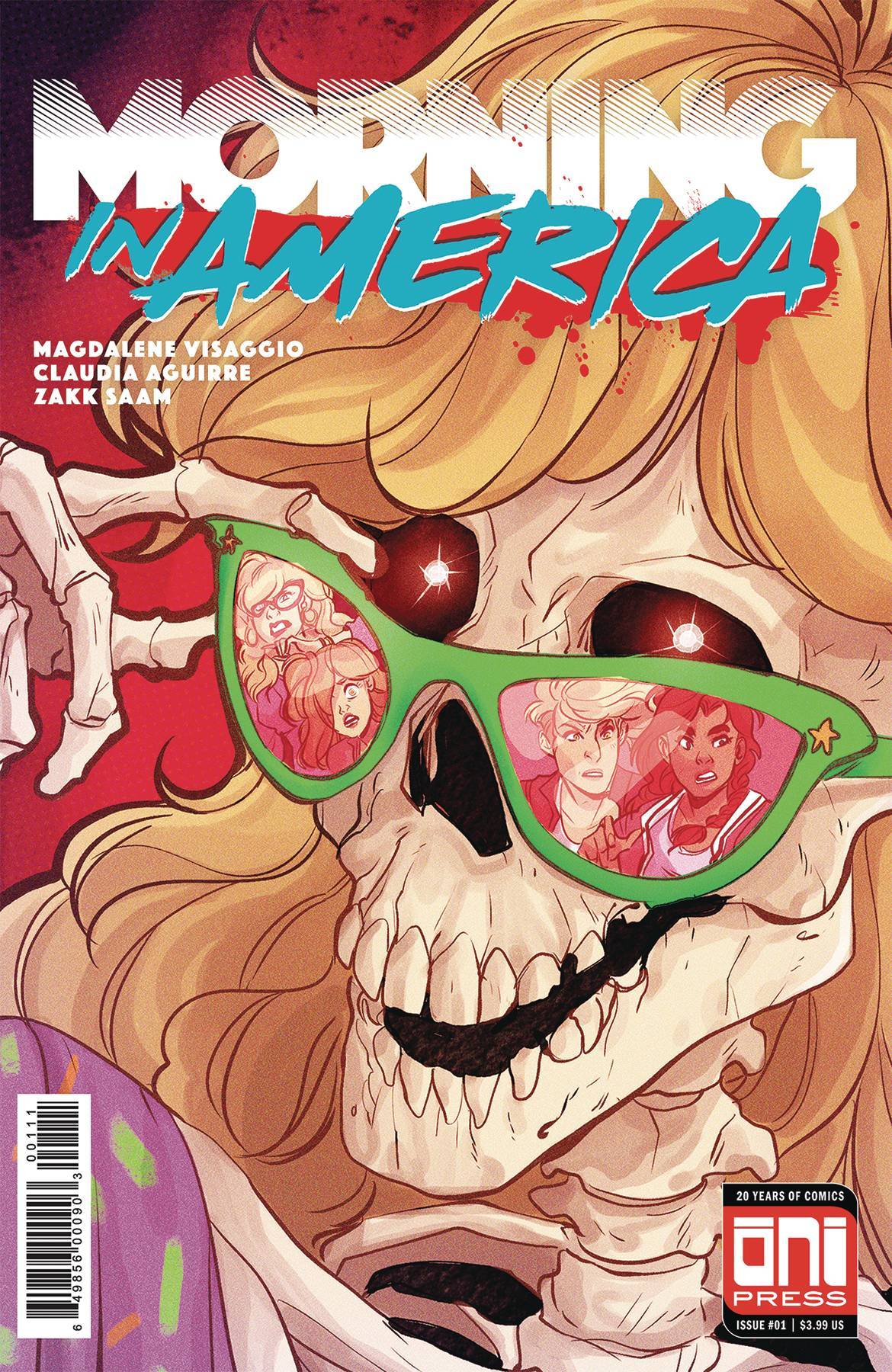 Morning in America #1 is off to a strong start. Written by Magdalene Visaggio with art by Claudia Aguirre and letters by Zakk Saam, the issue takes its time introducing us to our leads and setting up an overarching drama: a retro apocalypse.

Our protagonists are the Sick Sisters, a quartet of juvenile delinquents in 1980’s Ohio. A crumbling factory is the only thing supporting their home, and small-town life seems far too boring for these rebellious teens. That is, it seems that way until kids start to go missing. Visaggio makes an important connection between poverty and community trauma. The main character Nancy’s family argues over money, which leads to her acting out, selling cigarettes, and racking up charges for shoplifting and possession. Similarly, the town is in a state of desolation. With the only source of income being an old factory, the town is slowly on the decline.

As the socio-economic status of the citizens goes down, children start to go missing. Police dismissed the missing teen cases, claiming them to be runaways. The children of the poor working class of America aren’t even given the dignity of being recognized as stolen away. But Nancy knows the truth. She knows about the cover-up, and she knows at least part of the reason kids are vanishing. A fellow student whose sister has gone missing confronts Nancy. He claims to have seen the thing that took her, and that it was decidedly not human. So it’s up to Nancy and the Sick Sisters to put a stop to it.

Morning in America #1 uses its setting as a character. Tucker, Ohio, is a dying town. Citizens live in the shadow of a looming grey factory, spitting smog into the sky. Similar to the town of Derry in It, the small town stifles everyone within it. The town is ambivalent about the disappearing children. Youth is not valued here. Only older, more conservative values have a place. The setting and tone of Morning in America #1 is conveyed beautifully by artist Claudia Aguirre. The town and background characters are rendered in cool tones.

Store facades, streets, and homes are all either crowded to the point of claustrophobia or in wide open spaces. This leaves the audience with a sense of anxiety and isolation. Thus, the main characters stand out even more. Compared to their environment, the four main girls are warm and colorful. They are pink and yellow, warm colors to contrast the greys and blues of the world around them. The character acting also makes them stand out. There’s no shortage of cute micro-expressions or little moments of body language to distinguish the characters from one another.

With a market saturated with the ’80s based properties like Stranger Things and Paper Girls, Morning in America has some big shoes to fill. But where other stories fail with a retro setting, I believe the MIA team can rise above them. The ultimate failing of modern retro stories is to use the decade purely for set dressing. As much as I love Stranger Things, what does the setting really do for the story narratively? From an audience point of view, it’s fun to see all the callbacks to 80’s media, but beyond that, it’s purely ornamental. And there’s nothing wrong with ornament, but it’s a layer of depth that the story lacks.

Morning in America, on the other hand, seems to be more concerned with what film critic Lindsay Ellis calls Deconstructive Nostalgia. The dying industrial town of the Midwest was — and still is — a real concern for families of the time. Not to mention the rapid rise of child abductions in the 1980s. Rather than slapping a radical filter on a perfectly good story, MIA takes the problems of the time and makes a retro period piece out of them. The comic even took its name from Ronald Reagan’s ’84 campaign ads, actively deconstructing the idealistic view of the country pushed by the media.

It’s morning again in America. Today more men and women will go to work than ever before in our country’s history. With interest rates at about half the record highs of 1980, nearly 2,000 families today will buy new homes, more than at any time in the past four years.

What Can We Expect From Morning In America?

Going forward, Morning in America #1 has opened up readers to an exciting new story. While we know Nancy the best so far, the other characters are interesting enough to capture readers’ attention and bring them back for more. The mystery of what is stealing kids across Tucker is compelling, especially when an abducted girl’s brother nearly shakes down the heroine begging for help. Morning in America has the potential to be one of the most-read books of the year, with a solid premise and a fantastic creative team.

Even if the series falls in quality, the team is making fantastic choices to enhance the mood and themes of the story really compelling ways.