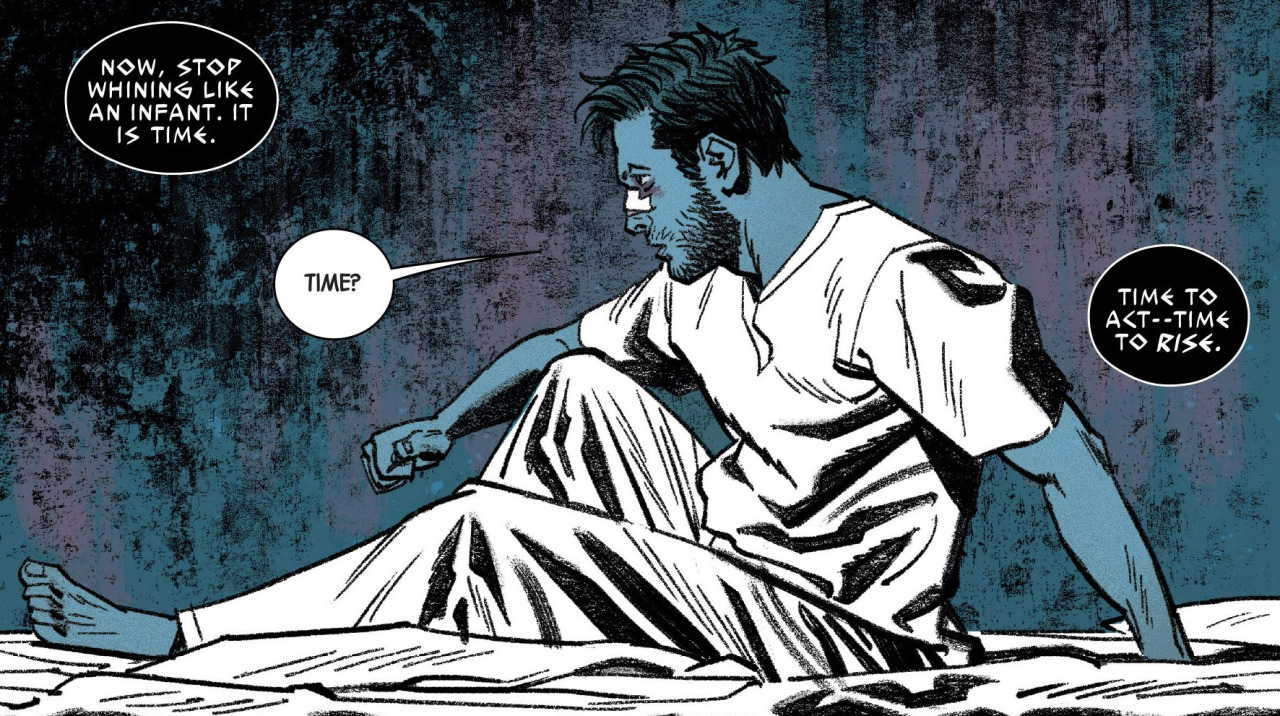 In Moon Knight #1, Lemire separates Marc Spector’s past from his present by using the character’s mental illness as a narrative device. The reader knows the ‘supposed’ mercenary Marc Spector gains his power from the Egyptian god Khonshu or has dissociative identity disorder or both.

His system, which is defined as all the separate identities referred to as a whole, contains three alters who helps him bring justice to New York. This system consists of the cab driver named Jake Lockley, the millionaire named Steven Grant, and the anti-hero named Moon Knight. They offer him contacts, money, and fighting strength.

On the other end of the spectrum, the reader can’t answer if his adventures did occur as a result of him being an unreliable narrator. His gifts may not be real. Due to his mental illness, the reader questions Marc’s reality during his time in the asylum. If his memories are correct, an unknown antagonist has him trapped in a psychiatric ward. If his memories are delusions, these stories manifested as a coping mechanism for an abused orphan.

I argue a third truth can be found. The answer to what really occurs in the story doesn’t matter because Moon Knight #1 is a tale of autonomy. Marc’s mental illness is the defining aspect of his identity to the other characters and to the audience. It isn’t to himself. His villains are the ones who work to cripple him by having him forgo responsibility.

By beginning to choose his own path, he represents someone who holds himself accountable. While Marc’s choices may not make him a selfless hero, they do make an individual who attempts to be better than the sum of his parts.

The orderly’s red hair comb represents physical control. He exerts his dominance over Marc by punching him because he’s too loud. This attack happens after Khonshu tells Marc, in a dream, he must become nothing to turn into someone else. His first task is to remember his past in order for his transformation to occur.

This moment also serves to show that the psychiatric ward as a negative force in their patient’s lives. Marc cannot become better because he has every reason not to trust their care. This moment foreshadows how he won’t give his autonomy over even if silence keeps him safe.

The second, significant moment where red appears is when Marc sees Moon Knight fighting Stained Glass Scarlet on television. It’s a significant choice from his rogue’s gallery because Stained Glass Scarlet in prior canon has a psychic bond with Moon Knight. This skill means she’s able to tell whether he’s real or an imposter. This building block helps the reader to create a villainous connection to the other woman in red in his life, his therapist.

The second complication is his alter-ego can’t be in battle if he’s in a psychiatric ward. The members of his supporting cast are also mental health patients. While he witnesses a confrontation on the streets, there is also an altercation in his mind. He struggles to commit to one identity of either a hero or a mental health patient. This moment establishes evidence he may not be Moon Knight, but Marc doesn’t trust his senses. He attempts to find his own truth.

The other woman in red the reader encounters is Marc’s therapist. Her intentions are unknown since she may be forcing him to reach stability or she may be a villain, but she helps assure him in making a plan of action to escape. Unlike Of Mice and Men, the opinion of a second individual does not reassure him of his sanity or insanity. Marc does not trust her judgment, so he uses his own.

“Maybe if he sees somethin’, he don’t know whether it’s right or not. He can’t turn to some other guy and ast him if he sees it too. He can’t tell. And, he’s got nothing to measure by. I seen things out here. I wasn’t drunk. And, I don’t know if I was asleep. If some guy was with me, he could tell me I was asleep, an’ then it would be all right.”

– Of Mice and Men

The red pen is how Marc regains the alter Moon Knight. In the ensuing battle, he never uses the item as a weapon, yet instead uses it to mark the Moon Knight symbol on his pillowcase. He has the capability to fight against those who hurt him from before as a result. His weakness was never an inability to clash against the overwhelming odds but finding the will to commit the act. This determination allows him to escape.

The artist shrouds his escape in red as he climbs towards the heavens. This moment shows Moon Knight at his strongest as he works towards a clear goal. He’s fast and breaks free from the tomb where he considers himself trapped. He regains his autonomy at this moment, but it doesn’t last.

The Conclusion To Moon Knight #1

The conclusion of Moon Knight #1 ends with Marc losing a battle for his identity because he’s brought back into the asylum. He falters against the orderlies due to the lack of allies who followed him in his old comics. They serve a two-fold purpose of helping him maintain his belief in what is real and provide skills he doesn’t have.

While his methods are extreme, Moon Knight is an avatar of justice. Moon Knight needs people to protect, rely on, and to ground him to succeed as a hero. If he chooses to follow Khonshu without a regard for his past, he doesn’t have a future.