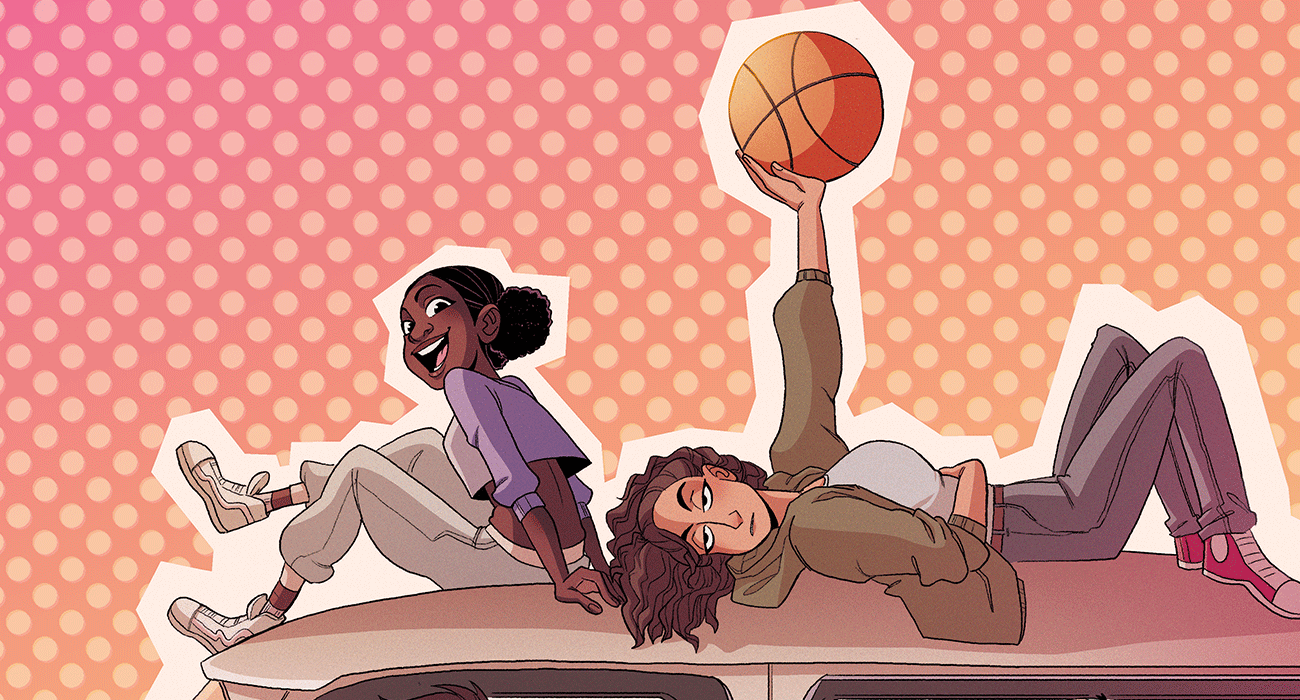 Meet The Team In The Avant-Guards #2!

Why did Charlie transfer to an arts school? Will she give in and join the new basketball team? Who are the other Avant-Guards? Writer Carly Usdin and artists Noah Hayes and Rebecca Nalty give us a few answers in The Avant-Guards #2!

#2 overlaps with the end of the first issue. This time, however, we see the events from Liv’s point of view. It turns out Liv has a crush on Charlie, giving her even more motivation to recruit her for the team. As Charlie mulls things over, Liv enlists the help of the rest of the Avant-Guards: Ashley, Tiffany, Nicole, and Jay.

Throughout the course of the day, they each try to convince Charlie to join in their own way. Their strategies escalate until Charlie goes to Liv and says she’ll do anything to make them stop. After a brief talk, Liv finally convinces her to join the team, just in time for their first game.

Wacky Weirdos In The Avant-Guards #2

As expected, #2 focuses less on Charlie and Liv and more on the other Avant-Guards. We meet Ashley, a singer, and prankster with a broken knee. One has to wonder how she’s going to play basketball with such an injury. Perhaps the Avant-Guards need one more member because of Ashley’s broken knee. Next, we meet the whimsical Tiffany who tries to start a witch coven when she’s not playing basketball. We get to know a little more about Liv through Nicole, a self-proclaimed cynic and Liv’s ex-girlfriend. Like Charlie, Nicole’s blunt and laid back personality balances out Liv’s high energy. While she insists they are better as friends, it seems like Liv might have a type. Finally, we’re reintroduced to Jay, a quiet non-binary person with an interest in film and drawing.

The Avant-Guards #2 does a great job fleshing out each of these new characters through their attempts to recruit Charlie. Jay’s attempt is simple but thoughtful while Nicole takes the most direct approach. Tiffany casts a spell, Ashley pulls a prank, and Liv makes a small but sweet gesture. While Charlie finds their actions a little overwhelming, the Avant-Guards do enough to be endearing without getting creepy.

We get to Liv a little more through her inner monologue in the first sequence. This puts her in direct contrast with Charlie, who had no inner monologue in the last issue. Unlike Charlie, Liv is an actress so it makes sense that her perspective would have that dramatic flair. Additionally, Usdin expands Liv’s character through the way she texts. For instance, Liv types in complete sentences with proper punctuation and capitalization. In contrast, the other girls use abbreviations and no capitals while Jay seems to opt for emojis over words. The attention to detail in these interactions makes this issue especially enjoyable to dive into.

The Subtleties Of Simplicity

Although the artwork seems simple enough, a closer inspection reveals just as much detail and complexity as the writing. Each character has a distinct look and silhouette that reflects their unique personalities. Once again, Hayes and Nalty make great use of backgrounds to convey the atmosphere and the emotions of each character. But out of every sequence, my favorite has to be the opening pages which refer to the basketball court scene from the last issue. Instead of just copying and pasting the sequence, Hayes and Nalty recreate each moment with some slight alterations. They draw the same scene from different angles to show what they look like from Liv’s perspective. They even incorporate the same backgrounds from the issue, giving the sequence the same feel with a new twist. As a result, the artwork subtly adds to #2.

The Gang’s All Here!

I really enjoyed getting to know the other characters in The Avant-Guards #2. The creative team manages to successfully introduce and flesh out four characters in a single issue. They have a fun, quirky dynamic that I’m excited to see more of. I’m also interested to see how Charlie will fit into the group once they actually start playing basketball.

Will they be ready in time for their first game? Does Charlie return Liv’s feelings? How did Ashley break her knee and manage to hide it for this long? Guess we’ll have to wait until next month to find out!

THE AVANT-GUARDS #2 BY CARLY USDIN, NOAH HAYES, AND REBECCA NALTY
Another excellent issue of The Avant-Guards! This issue was just as much fun to read as the first. I appreciate the nuances of the artwork and I like the group dynamic. I'm so excited to read more!
PROS
CONS
98
Teamwork FTW!