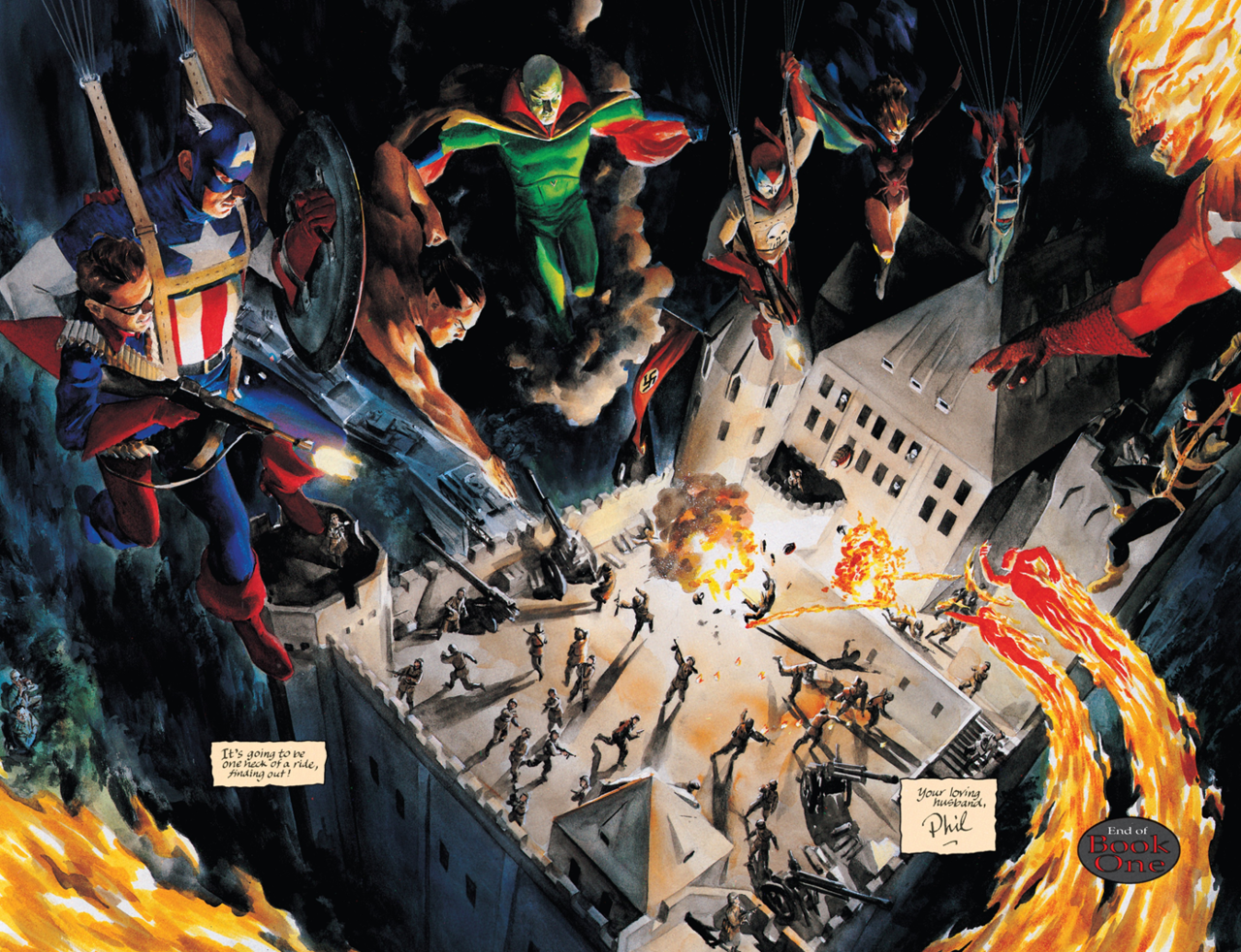 Since comics began, many have wondered what the world would be like if superheroes existed. Would these heroes be feared because of their amazing powers or would they be seen as gods? Marvels Annotated gave readers a chance to see the world of Marvel comics through the eyes of a regular human being. Readers get to see the consequences that come with the birth of heroes.

This groundbreaking series by Kurt Busiek and Alex Ross was created twenty-five years ago and is still a fan favorite today. To celebrate 80 years of Marvel comics and this series quadricentennial, Marvel re-released this series in single-issues and rebranded it as Marvels Annotated. In addition to making the series more accessible to a new generation, Marvel also added behind-the-scenes special features to each issue. Plus, Kurt Busiek and Alex Ross also decided to create a new chapter for the series named Marvels Epilogue. There is so much to unravel with these issues. Sit back and relax and let’s discuss the marvelous series known today as Marvels Annotated.

This period piece begins way back in October 1939 in New York where a young photographer named Phil Sheldon is trying to make a name for himself. This mild-mannered man’s life turns upside down when creatures begin to appear in New York. From a robotic man on fire to a naked man from the ocean. Phil begins to feel like it is his duty to document these creatures for the world. As many tell him to be careful, he runs into many life or death situations, but he knows he must document these moments for the world.

As the years go by, Phil starts a family while becoming known as the top photographer for documenting Marvels. From this point on, the series begins to focus on Phil witnessing the birth of superheroes to crucial comic book moments. Through the years Phil focuses on these moments but always tries to make time for his family. After living through so many catastrophic events and witnessing a horrible death, he begins to rethink his life. The story ends with Phil Sheldon realizing he’s growing too old to photograph Marvels and decides to give his camera to his assistant to take over his legacy. He looks forward to the future and wonders what it has in store for him.

Marvels from beginning to end is a great read that contains amazing art. As the book shows a different viewpoint of classic comic moments, there is an area that truly gleams. Kurt Busiek’s writing illuminates at the end of each issue. In many books, problems are usually solved by the end of the story, but this series handles ending differently. This series shows that not every problem can be solved by the end of the day. There are problems in life that can’t be solved so easily, and this series demonstrates that very well.

One of the many examples happens in issue two. After a run-in with a mutant Phil is watching the news discussing how horrible mutants are. His daughter walks in and asks if the mutant they met will be okay. He holds her tightly and says, “I don’t know, I hope so.” This moment is a perfect example of how some problems can’t be solved so quickly. Living in a changing world with a society full of hate, there is no way to know if certain outcomes will work out in the end. Leaving the end of an issue two up in the air like this is powerful and grounds the series in reality. Moments like this are spread throughout the series, creating a wonderful reading experience.

Book Three of Marvels contains some of the best moments in the series. Not because of the action or art, but of what it says about society. During the book, Phil witnesses the coming of Galactus and the amazing battle with the Fantastic 4 that ensues. After Fantastic 4 saved everyone from Armageddon, everything began to go back to normal. Everyone goes back to their daily lives and it begins to feel like doomsday almost didn’t occur. Phil was out with his family in New York when he heard people talking. All of them are discussing how terrible heroes are and how mutants are the worst.

Phil gets disgusted and tells them to stop and be grateful that they are alive because of these heroes, then the book ends. This moment is so powerful because it comments on how society is and makes readers think. Someone will find something to complain about even if everything in life is going well. There could even be someone doing good for the world and one individual will try to find something to disagree with and try to spread hatred. A lot of people ignore this part of society but when readers are faced with the issue in this book, it makes them ponder about the world everyone lives in.

Each book in the Marvels Annotated contains special features. These special features give a glimpse of what goes into creating a book like this. Readers not only see extra artwork from Alex Ross, but they also see what inspired the curtain panels for the issue. Other than that there are written notes from individuals during the development of the series in 1994. In addition to all that content, Marvel also added the original scripts to each issue. Marvels Annotated issues alone are an experience like no other, and everyone should grab a copy if they find one. It costs a little more than a regular comic but it’s worth every penny.

In short, Phil is back as a photographer and now his children want to be photographers too. All three of them witnessed an event with Marvels and Phil is proud that his daughters want to be like him. While it’s wonderful that his children want to continue the legacy, it’s odd that he still photographs Marvels. It ruins the idea of Phil being happy with his life and looking toward the future. This book does show that he is happy and things are looking up, but it makes the last scenes of book 4 meaningless.

As it looked like he was passing the torch to the next generation, now it just looks like he needed a break for a bit. It takes away the meaning and shows he’s not truly happy if he’s not photographing Marvels. After reading the original work, this issue doesn’t feel like a wonderful peek into Phil’s life. It looks more like a confusing peak, maybe a version of him in a different universe. Despite this problem, the art is fantastic with writing that may not be as great as the original arc but it is still a good read. The issue does contain small extras but not as much as the annotated issues had. If readers are interested in finding out more about Phil after book four, it’s good, but readers may want to just stick with the original four books.

Reading Marvels Annotated was an amazing experience because it is a love letter to all comic book lovers. Everyone has wanted to live in a world full of heroes, and in this series, we get front-row seats. As it is wonderful to live amongst the heroes we idolize there are a lot of consequences that come out of living in a world with them. As comic book readers, we see only one side of events, but in reality, it’s a terrifying world to live in as a bystander as this series showcases.

There is a moment in the series where a cybernetic Human Torch is fighting Namor and a terrifying event occurs. Let’s just say a lot of New Yorkers had to die in that battle. There is so much to unpack in this series that this article could go on for days. It’s a book that you can talk about over and over again. This has been on my top comic to-read list and trust me it should be on yours too. It’s a wonderful experience on every page. Marvels is a Marvelous read, and Marvels Annotated should be a part of your comic book collection.

The Daily Fandom may contain links to other websites or content belonging to or originating from third parties or links to websites and features in banners or other advertising. Such external links are not investigated, monitored, or checked for accuracy, adequacy, validity, reliability, availability or completeness by us. The site may contain links to affiliate websites, and we receive an affiliate commission for any purchases made by you on the affiliate website using such links. All information on TDF is provided in good faith, however we make no representation or warranty of any kind, express or implied, regarding the accuracy, adequacy, validity, reliability, availability or completeness.