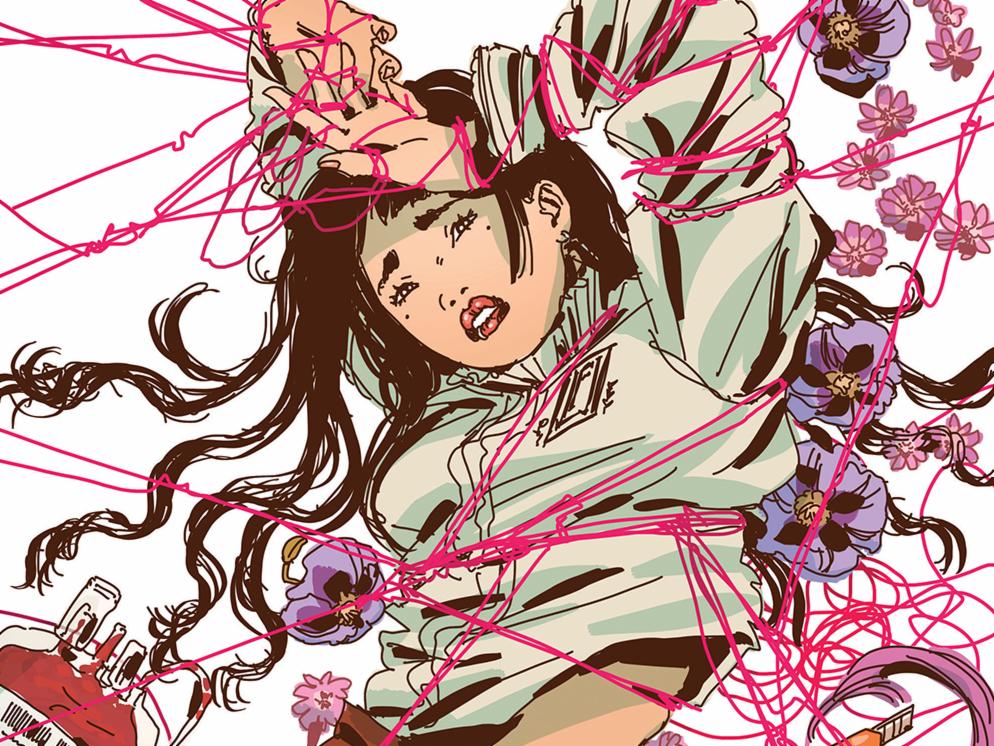 Maria Llovet Is A Master Of Character Development In Heartbeat #3

Heartbeat #3 is the third installment in this five-issue miniseries by Maria Llovet. As was true in the first two issues, the series finds a happy medium in its simplicity. There isn’t much dialogue, but the voiceover and the intricate art supplement it nicely. The issues are quick reads, so it sometimes doesn’t feel like a lot happens, but after a few minutes of letting everything sink in, you realize how deep and meaningful everything on the page truly was.

When I reviewed issue #1, I had a lot to say about the character of Eva and her perceptions of right and wrong. I thought that Llovet did a great job of finding a balance between the two and showing us that Eva didn’t really know what she was doing and if it was right. In just three issues, the character of Eva has changed before our eyes.

Heartbeat #3 does a fantastic job of letting us inside Eva’s head. We begin to see her doubt herself less. She just does things now, without hesitation. It’s nice to see that she’s grown. The choices she’s making as a result of this are surely not for the better.

Heartbeat #3 has some of the most interesting characters in it. The series does a great job of bringing complex and unique people into its world and then showing us how they’re capable of growth and change. The best example being Eva herself. In the first issue, she was insecure and unsure of herself. She skirted around everyone and tried not to make herself the center of attention. Sure, she was into some weird things, but overall she was a quiet girl. Meeting Donatien has brought her more out of her shell (though maybe not in a good way) and given her more confidence.

We still don’t know too much about Donatien, but he’s captivating to follow on paper. Heartbeat #3 does a wonderful job of giving us more information about these new characters without giving everything away completely. When I first reviewed issue #1 I took issue with the fact that it was being marketed as a horror book. It didn’t seem scary enough to me to constitute the horror label. While it was dark and freaky, it didn’t feel like true horror. My opinion on that matter hasn’t completely changed, but I do feel the story moving closer toward the horror genre with each issue. The last scene of Heartbeat #3 where Donatien and Eva are having sex and drinking each other’s blood felt very horror-esque.

What’s Next For Heartbeat?

Heartbeat #3 is the turning point in the series, the point of no return. As this series has only five issues, it must be wrapping up soon. However, it doesn’t feel like it’s close to an ending point. It also doesn’t necessarily feel like enough has happened yet. There’s still so much I want to know about the characters and their relationships. It doesn’t feel like two more issues will be enough to wrap everything up. However, I’m excited to see where things go with the rest of the series. Eva and Donatien’s relationship is obviously very toxic. There are many ways that that could end for the two of them, and I don’t see any of them being a very happy ending.

Amber (the girl who died in the first issue) clearly didn’t get her happy ending, but there’s still more to investigate with her brother Mack. Mack knows that Donatien is up to no good, and is even pretty sure that he killed Amber. Ending Heartbeat #3 with him outside Donatien’s window, watching the exchange between him and Eva is an interesting set up for the next issue. As Mack and Eva used to be (and maybe still kind of are) friends, surely Mack isn’t going to take the news of Eva and Donatien’s relationship well.

Should You Read Heartbeat #3?

In short, yes. This is one of my favorite original comic books right now and I highly recommend it to anyone who’s looking to read something off the superhero path. BOOM! Studios has a lot of good books out right now, but this is at the top of my list.

If you’re into books that are a little strange but have great character development and art, then this is definitely the book for you. However, start from the beginning. There are only three issues so far, so it won’t take long to catch up.

Maria Llovet Is A Master Of Character Development In Heartbeat #3
PROS
Fantastically written characters
The right amount of creepy and weird
CONS
Not a lot going on
Doesn't feel like it could wrap up in two more issues
98
WHO IS EVA?