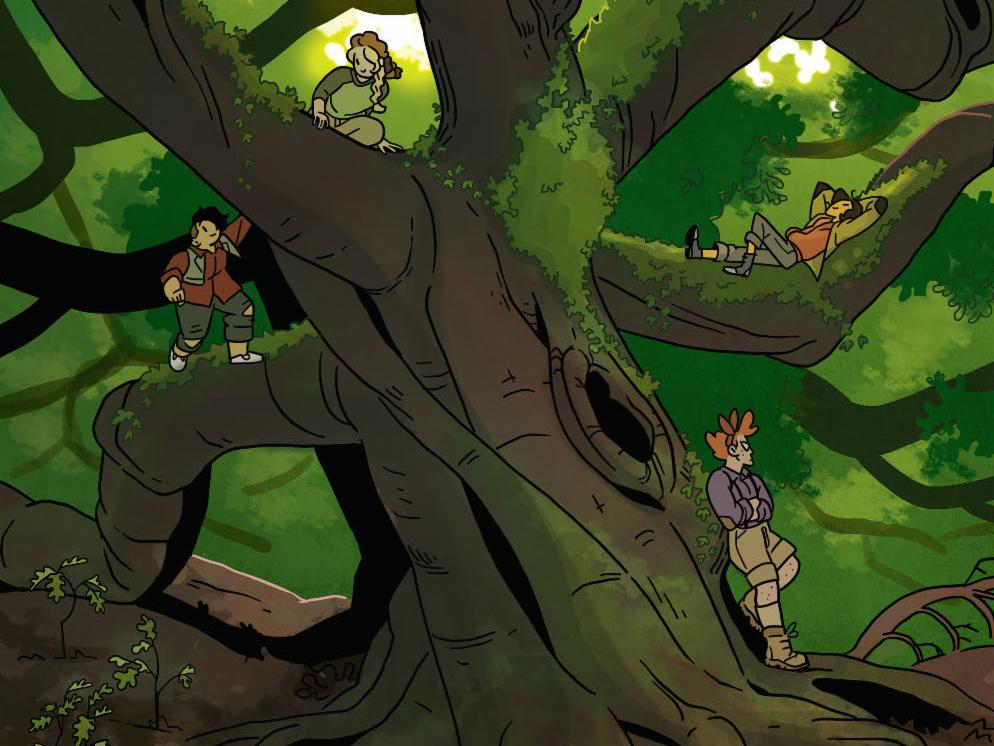 Lumberjanes #69 starts a new story arc with our favorite characters. After wrapping up the last arc with issue #68, we’re ready for something new. Shannon Watters and Kat Leyh wrote this issue, and Kanesha C. Bryant and Julia Madrigal illustrated it.

Maarta Laiho colored it, and Aubrey Aiese did the lettering. The team created an overall stunning and beautifully written issue of my favorite series. I’m always excited to see what a new story arc will bring, especially in ongoing series’ like Lumberjanes. In the last arc, we dealt with disappearing cats and new enemies, like Freya, who really turned out to be a friend.

At the first panel, I knew this was going to be an interesting issue. They’ve never really touched on where the “Lumberjanes” came from or how they came to be. There have been stories and ideas, but never one concrete answer. This story arc might finally give us that.

Lumberjanes #69 gives us a glimpse at the original team of girls. The issue’s first panel sets the scene, showing us the same camp, but years and years ago. The story follows Peggy, Jane, and Eleanor as they run away from their camp and fear getting caught by the director (sound familiar?). At the end of the original Janes’ story, Jane falls out of a large tree and one of the other girls says, “What is that thing?” in reference to something we don’t get to see on the page.

Learning About Trees In Lumberjanes #69

Meanwhile, the present day ‘Janes follow Rosie into the woods with axes to learn how to chop down a tree. They also learn about different types of trees and how to identify them.

One of the things that the Lumberjanes series does well, especially in Lumberjanes #69, is adding an element of education. During the issue Rosie teaches the girls about the differences in types of leaves, and which trees are called which things. This also informs the reader, and I found it kind of fascinating to learn about.

As the series is targeted towards younger adults and even older children, it’s great that they include fun facts like this. I know it’s definitely something I would have appreciated learning when I was a kid.

While out on their adventure, Molly does the typical Molly thing and answers all of Rosie’s questions correctly. Molly is probably the smartest of the Lumberjanes, except she gets embarrassed and shy whenever her smarts show. Mal is always quick to tell her that it’s okay to be smart.

At the midpoint of the issue, we realize that the stories about the original Lumberjanes are coming straight out of a journal that Molly found that belonged to one of the ‘Janes themselves.

What’s To Come After Lumberjanes #69?

Toward the end of the issue, Molly reads a story from the journal (the one about Jane falling out of the tree). Just when Jane falls out of the tree the story stops. Two of the pages are stuck together.

April takes the book and tries to pull the pages apart, ripping them out entirely. Molly is destroyed, and the ‘Janes will never know how the story ends. Rosie comes over and picks up the book, astonished by it. She looks at it and says,

“Oh, my! I believe this book belonged to HER!”

Molly storms off alone into the woods, angry that the page was ripped. At the very end, she runs into someone off-panel. Molly says,

So, who is this mysterious person that the journal belonged to? And is it the same person that Molly’s run into in the woods? Lumberjanes #69 is a good start to a new story arc, and raises lots of questions for the next issue.

Should You Read Lumberjanes #69?

I’m never going to stop telling people to read Lumberjanes. It’s a fantastic series with incredible characters, diversity, and is in general just a lot of fun. However, if you pull the issues a part individually, they can be kind of bland. They’re quick reads and always fun, but they sometimes can lack substance. If you’re an action hero comic book reader, you probably won’t enjoy this series. But, if you like easy to read stories with fun characters, you should pick this up. Maybe wait until the volume comes out.