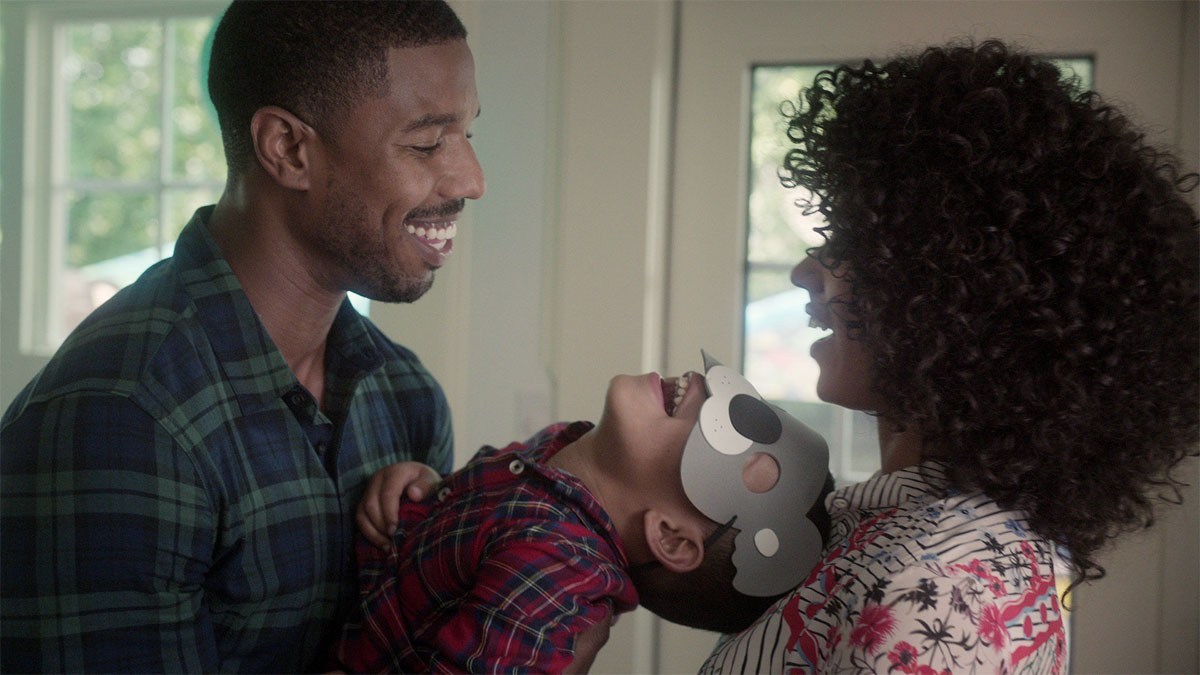 Netflix’s Raising Dion takes watchers on a heartfelt journey, exploring many of the facets of love, trust, and power. As is often the case, there were plenty of times to smile but also times to cry, such as when the recent loss of her husband hits Nicole particularly hard.

But other times it’s simply infuriating, but at a character, not at the original author and then the directors. One specifically infuriating case is the character of Pat, once best friend of her late husband/father Mark Warren and godfather to Dion.

Though Pat ends up being a villain, when Netflix’s Raising Dion started out, he seems like a neutral or even good character. Pat seemed to be really stepping up and trying to provide for Dion and Nicole in any way he could. However, as the episodes roll by and Pat grows closer to the family, the show reveals more of his true character. One of the key events in revealing his true character is when Pat kissed Nicole. Though Pat initially apologized, he quickly spiraled and the watchers soon saw the true villain in him (and not just his part as the Crooked Man).

There’s one particular scene that encapsulates Pat’s true character in many ways. It’s outside of the dance school where Nicole works. Pat had just spied on her dancing with an old dance-partner (and potential love interest). Understandably, he’s a bit sad since he wants to be her dance partner in life, but Pat isn’t simply sad; he gets mad at Nicole.

Throughout this conversation, it becomes more and more clear that Pat thinks he deserves her. He is the “nice guy” character who thinks that all the good he does for someone leaves him deserving of whatever he wants from that person. This is not how healthy relationships work.

Beyond Pat In Raising Dion

If all the relationships in the show were like Pat’s not-so-great character, Netflix’s Raising Dion would not be as wonderful or inspiring. Instead, there are many positive, though imperfect, examples of how to actually love another. Kat, Nicole’s sister, and Dion’s aunt are initially so concerned about Nicole that she considers calling social services for Dion; however, she doesn’t just give up on Nicole but instead tries to help.

Nicole is another excellent example, putting her son above herself and trusting in her late husband. Finally, Dion and his love for his mother is another amazing example. Even as a young kid, still figuring out the difference between right and wrong, Dion takes care to make her smile. Pat and Kat’s understandings behind why they offer help to Nicole are fundamentally different.

“You are my business, okay? I’ve been keeping your secrets. I’ve been risking my job for you. You let me keep thinking I had a shot. I guess, so I could just keep on being your pathetic little errand boy.”

Ever the “nice guy,” Pat tries to manipulate or guilt-trip Nicole into doing what he wants, becoming his girl. To him, supporting a friend in need isn’t free; instead, it comes at a steep cost. If you don’t pay up, Pat feels and even tries to play the victim.

This is in sharp contrast to Kat’s idea and method of support. Understandably, Kat doesn’t automatically believe Nicole’s assertions that Dion has super-power. After witnessing Dion’s power, Kat completely switches and helps them so far as to even lose her job. When this happens, she doesn’t guilt Nicole as Pat does. Kat loses not only her job but also her partner to protect Dion. But instead of getting angry like Pat, Kat simply says:

Kat doesn’t blame Nicole nor expects anything from Nicole in return. The way Kat sees it is that she did what she had to do to take care of the people she loves. Where Pat expects to be paid up for his acts of kindness, Kat acts out of selfless care. Where Pat offers a loan with high interest, Kat donates her way of life with no strings attached.

As is not done enough, Netflix’s Raising Dion shows us the contrast between a love like Pat’s and a real love like Kat’s. Where some shows may have sided with Pat’s struggle, this one doesn’t accept his justifications or self-pity as an excuse. Pat’s reaction to situations he doesn’t fully understand involving those he’s close to is starkly different from Nicole’s.

As if losing her husband wasn’t enough, Nicole’s world shakes and tumbles around her with Dion’s newfound powers. Then, on top of all this madness, she pulls a woman’s number out of her husband’s jacket pocket. It’s not unreasonable for one’s mind to go straight to the thought of an affair. If the woman that Mark Warren died saving wasn’t actually a stranger, why was she a secret from his wife? Why had he scrawled her number on a torn piece of paper and stuffed it in his jacket? Though these fears may have plagued Nicole, she did not settle on them.

Searching For The Truth

After a night of deliberation, filled with plenty of drama with Dion, Nicole called up the “stranger,” Charlotte Tuck.

But Nicole stops near the end of the call and, drawing in a shaky breath, adds another bit in to clarify. “I’m not accusing you of anything; I’m just trying to find out who I was married to.”

The Rarity Of Hope Outside Of Raising Dion

Nicole has the strength to trust in her partner so much that, even when a new secret comes to light that would often point to a betrayal, she gives him the benefit of the doubt. The media so rarely displays this level of strength, trust, and partnership. Dramas and action movies alike typically crave betrayals and corresponding, extreme responses.

It would seem that it’s impossible to sell the bent-but-not-broken family, the one that’s loving, but not without its flaws. But Netflix’s Raising Dion proves that it can be done. This scene paints a character that trusts before drawing conclusions and searches for the truth, maintaining hope in her husband.

Unfortunately, nothing similar can be said for Pat. As we see demonstrated in a scene outside the dance school, Pat immediately distrusts Nicole. He jumps to thinking that Nicole was somehow “cheating on him,” despite Nicole not actually owing Pat anything. He calls her out, accusing her of behavior that’s completely acceptable for her.

But making it clear that this behavior is inexcusable. Behind this is insecurity that’s poisoned his ability to trust other people. Notably, this isn’t the same as being slow to trust, or having a trust issue; those can exist without the anger and hatred that accompanies Pat’s distrusting reflex. Instead, his inclination to distrust intertwines with his desire for control and his twisted understanding of what he is owed. What Pat wants from Nicole is on the opposite end of the spectrum as what Dion wants for her.

As with any child, Dion brings his mother a fair amount of stress and worry, and his powers developing only amplify this. However, Dion doesn’t only make life harder for his mom. There are multiple beautiful scenes where Dion notices his mother’s sadness and does something silly to make her smile. With his mastery over his powers growing, Dion’s little every-day gifts to his mother get more impressive. One of the most beautiful was after a hard day for Nicole filled with job searching and disappointment. Dion sneaks into her room after bedtime to check on her.

They exchange a few cute words and then Dion decides that they need to dance. He opens the window to let in the music from outside and raises his arms towards the ceiling. With his eyes squinted shut, he filled the room with twinkling, glowing lights that exploded out and danced around Dion and his mother. “Do you like it?” he asks of her. His mission of getting her to smile has worked. “It’s beautiful,” she said with amazement and joy playing on her face.

The Strength Behind Raising Dion‘s Heroes

Netflix’s Raising Dion does not make the relationship between mother and son perfect. They have their fights and disagreements, but their love for each other is part of how they both remain heroes throughout these hardships. Raising Dion shows the importance of taking care of loved ones, through the little and the big things.

Pat’s mission is not to get Nicole to smile, at least not in the pure, selfless way of Dion. He instead longs only for her to be in his control, doing and saying what he wants. There, outside the dance school, he starts off playing the victim; he says that he’s tired of always doing everything she asks of him and that he thinks she’s taking advantage of him.

Nicole heard him and is concerned. She stops what she’s doing and focuses on him, ready to engage and listen and work through this problem. However, as soon as she does this, Pat jumps to this attention to do something else entirely. He blows past the hand she extended in peace and understanding to accuse her of being with her dancing partner. It’s he who manipulates her kindness, not the other way around, as he claims at the beginning of this conversation.

In Our Lives In Raising Dion

While Pat’s “nice guy” toxicity stinks up their lives, Nicole and Dion still have plenty of love for each other, for their family, and for their family. These two amazing characters fill viewers with joy and inspiration with their strength and commitment. On the other hand, Pat reminds and warns viewers of the people both to protect oneself from and to make sure to avoid becoming.

While most people won’t ever face down a once-friend who has become an evil storm and is consuming their loved ones, Raising Dion does an amazing job of pointing out the strength and love of everyday heroes and the villainy that shows up all too often in real life.