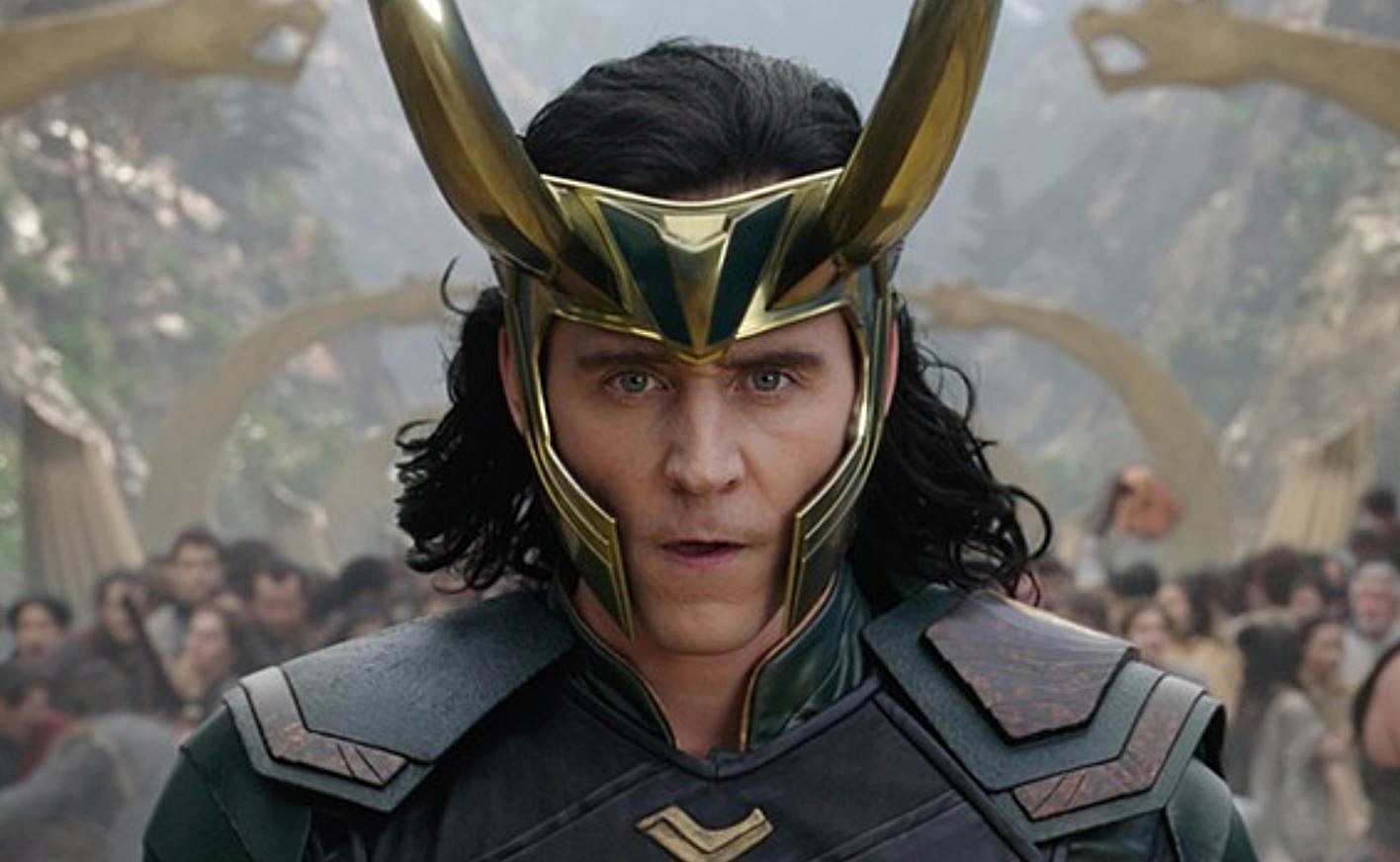 Welcome to Bae Watch Wednesday, where I tell you all about the fictional characters you ought to be crushing on. This week, I’m running high off the magnificent spectacle that was Thor: Ragnarok so I’m here to talk about my favorite sass-gardian, Loki.

We meet both characters as children being raised on stories of conquest and heroics by Odin. When next we see the characters, they have grown up, and Thor is poised to take the throne of Asgard.

Over the course of Thor, we see a darker side of Loki. Although he first appears to be a loving brother, he is consumed with jealousy and insecurity. He doesn’t understand why Thor is the favored son and undertakes a campaign to secure Odin’s approval.

Of course, this plan is convoluted and underhanded, wherein Loki uses deception to place himself in the right moment to “save” Odin from the Frost Giants… the only problem being that he was the one who gave the Frost Giants access to Odin in the first place. Really, not the best plan.

Thor also reveals that Loki’s backstory is not uncomplicated. Although he was raised thinking he was the son of Odin and his wife Frigga, and the brother of Thor, that is not his true lineage. Loki discovers he is the son of Odin’s arch-enemy Laufey, king of the Frost Giants. For a child who was raised on the stories of Odin’s glorious defeat of the evil Frost Giants, this is a harsh blow.

In the end, Loki’s plan fails and he is removed from power. Having sunk further in Odin’s esteem, he eventually refuses to be saved and falls to his death… or does he?

Obviously, that’s not the end of things for Loki. He returns as the villain in the biggest superhero movie event ever: Marvel’s The Avengers. The Avengers reveals a little of what Loki has been doing since he fell from the Bifrost at the end of Thor. He has allied with the Chitauri. Loki seeks to conquer Earth, and the Chitauri will be his conquering army.

The Loki in The Avengers is not quite the same person we met in Thor. In fact, some fans speculate that, in the interim between the movies, Loki has been tortured by the Chitauri. Some even claim that he has been brainwashed by the reality gem in his staff, as he will brainwash several important characters, such as Hawkeye and Dr. Selvigg.

Whether or not he was tortured, brainwashed, or acting of his own volition, however, this Loki is a far darker one. Whereas before he was willing to murder the Frost Giants to “save” Odin, he is now filled with bitterness and hatred. He hates Odin for lying to him all his life and for favoring Thor, his real son. He shows no hesitation in wholesale murder, and the destruction he causes has a lasting impact on the MCU.

In the end, the Avengers defeat Loki, and he returns to Asgard with Thor. When we see him at the beginning of Thor: The Dark World, he is sentenced to imprisonment by Odin. He is still bitter and doesn’t understand why it was okay for Odin to be a conquering god but not for him.

He is eventually freed from prison by Thor, who needs his help to stop the Dark Elves. Loki agrees because it will give him a chance to avenge Frigga. Their reunion is funnier than it is touching, although their interactions really hit home that, blood or no, they are truly brothers.

On Svartalfheim, the home of the Dark Elves, Loki fights alongside Thor. More than that, however, he helps Thor use deception to trick the Dark Elves. In the end, their plan doesn’t work, and Loki sacrifices himself to save Thor. Thor is heartbroken to see his brother, who he has only just begun to forgive, die… except we find out in the post-credits scene that Loki didn’t die, and he has taken over Asgard disguised as Odin.

This is where we come in for Thor: Ragnarok. Thor returns to Asgard to prevent Ragnarok and finds that “Odin” is acting suspiciously. He proves that it is Loki in disguise, and forces him to help look for Odin. The two brothers are together when Hela arrives, and find themselves trapped in a far-off world after failing to defeat her. I won’t go any further into the plot of Ragnarok, as I highly recommend everyone see it for themselves. Suffice it to say that you won’t be disappointed if you’re a Loki fan.

Why is Loki Bae?

Let’s be honest, Loki would be a terrible bae. The man has serious problems with the truth. Add in serious family baggage, deep-seated insecurity, and a strong desire for power, and you have a seriously messed up person on your hands.

Playing the god of mischief put Tom Hiddleston on the map. Although Hiddleston has a fairly impressive background in theater, Thor was the film that made him a big name. With follow up roles in three other MCU features, he’s become a much bigger star than I think anyone expected. It doesn’t hurt that the man looks like he could be a god.

Okay, if we ignore the megalomaniac tendencies, Loki is pretty cool. As the god of mischief, he’s wildly entertaining. Aside from his awesome magic, he’s very witty. His interactions with most characters are fantastic, but watching him interact with Thor is golden.

The two may not be related, but the scene in The Dark World where they try to escape Asgard is 100% proof that they are brothers. Anyone with a sibling can attest that bickering is a sure sign of love.

His characterization in Ragnarok plays up this mischievous quality. Taika Waititi wanted this to be a comedy film and Hiddleston, for all his Shakespearean training, does an excellent job of that. When Thor first returns to Asgard, he sees a giant statue of Loki and “Odin” watching a play that dramatizes the death scene in The Dark World. It fits in well with the self-aggrandizement mixed with severe insecurity we see in Loki’s character.

He fights with daggers and moves incredibly quickly and fluidly. In a world where these characters are more likely to SMASH, this fighting style is distinctive and impressive.

Yeah, this isn’t a character most people would associate with loyalty. Loki is scheming, and will not hesitate to do what needs to be done to achieve his usually less-than-positive goals. In certain instances, you can see a deeply sensitive and emotional person who forms deep connections.

Take Frigga, for instance. Although she is not his birth mother, their relationship is filial. Frigga is the only person to visit him while he is imprisoned. She brings him books, something she knows will please him (but wouldn’t likely please the other men in her life).

Frigga is also a huge influence on who Loki is. She is the one who taught him magic, and that cool fighting style I mentioned earlier? That’s all Frigga. If you watch the scene where she fights the Dark Elves, it’s a clear corollary. When Frigga dies, you see true heartbreak in Loki.

Loki’s relationship with Thor is much more complex but equally as compelling. The two struggle with natural sibling rivalry augmented with severe differences. They are as alike as oil and water, and they clash fiercely. At the same time, their relationship is close and touching.

Loki is the only person that can get through to Thor in the first movie when Thor is angry with Odin. Even after Loki’s actions in The Avengers, Thor still wants to trust his brother. Their dynamic in Ragnarok is likewise touching, and watching them interact brings home how these two are family, even if it’s a messed up family.

Loki is a fascinating and complex character. Sure, he’s hot. But that’s not all there is to him. This is a character who is so messed up it tugs at your heartstrings. You can empathize with him. Sure, you may not secretly be a Frost Giant, but you might have a messed up family too. And while I sincerely hope none of you proceed on a campaign to rule the world, we can all sympathize with someone who is searching for approval and love.

I walked into Thor severely uninterested. I walked out with a new obsession, one that fangirls the world over can understand. Watching the progression of Loki’s character from Thor, through The Avengers and The Dark World, up to where we are now in Ragnarok, has been an amazing ride. I can only hope that he continues to pop up in the MCU for some time to come.