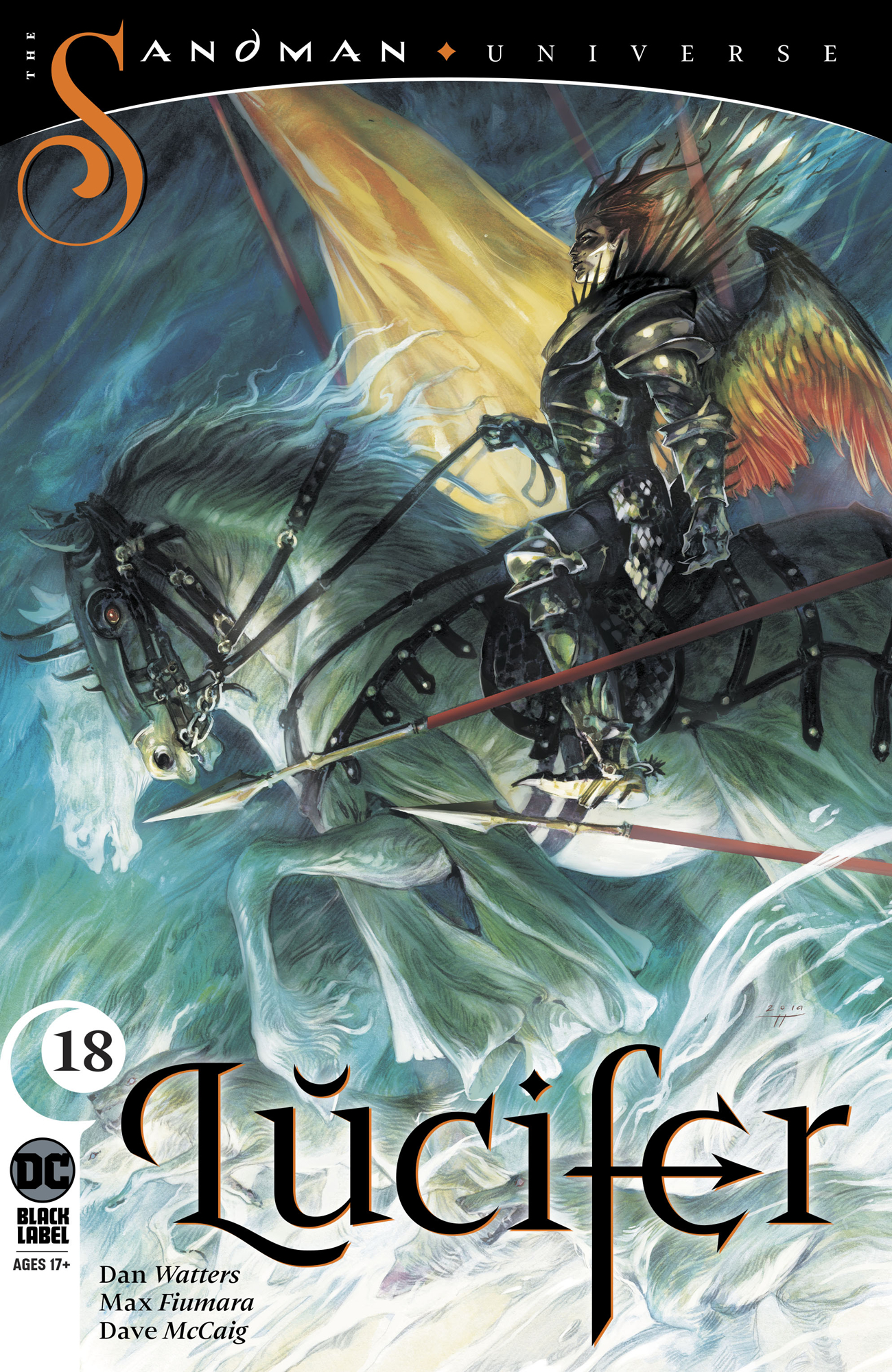 Learn The History Of The Hunt In Lucifer #18

The long journey of The Hunt continues in Lucifer #18. Odin and his hunters chase the Hunted God, who is in the protection of Lucifer. The Hunters leave a trail of destruction and death wherever they go. Dan Watters uses his 18th issue to provide readers with a history lesson on The Hunt. A history that dates back thousands of years. Each time the Hunted God is killed it is reborn over and over. Though the Hunted God was once a difficult and powerful foe, it now is a frail old woman. The Hunt storyline is undoubtedly Watters’ best story thus far in the book.

The race between Lucifer and Odin has been nothing short of a masterpiece. The story is a perfect balance of art and story writing. The creative team of Lucifer continues to impress with each passing issue, and Lucifer #18 is yet another satisfying book to the collection.

Origin Of The Hunt

In the previous issue, we saw Odin left for dead by his own hunters. Though, with the help of his ravens Huginn and Muninn, he is able to get one of Idunn’s apples of life to save himself. Once Odin has recovered he finds the Hunted God, who Lucifer has left briefly. Odin attempts to deceive the hunted God by revealing the true history of The Hunt and Lucifer’s role in it.

As Odin explains the history of The Hunt, we witness Lucifer’s first interaction with Odin and the Hunters. Lucifer is fascinated by the idea of The Hunt and demands he is apart of it. We are then given a montage of Lucifer killing the Hunted God repeatedly, even going so far as to slay the being before it is even born. Now, that is pretty brutal of Lucifer, I mean, killing an unborn child and its mother! But, how honest is Odin being, he is, after all, attempting to deceive the Hunted God in order to kill her himself. I guess time will tell to see if Lucifer is responsible for such heinous acts.

As Lucifer tries his best to keep the location of the Hunted God secret from the Hunters, the task grows tougher when he uses his powers. Lucifer using his powers reveals the location of the planet Lucifer is on. The Hunters catch the trail of Lucifer and go everywhere he has been recently, turning the sites into rubble and leaving no survivors.

Mazikeen’s shop is one of the places that is destroyed by the Hunters. Lucifer takes the Hunted God to the destroyed shop and searches for Mazikeen or her body for that matter. However, the only thing found in the silver mask Mazikeen wore. Lucifer leaves the Hunted God alone in order to find Mazikeen. Eventually, this leads to Odin finding the Hunted God.

The Art Team Of Lucifer #18

Lucifer #18 sees the return of the amazing art team lead by Max Fiumara and Dave McCaig. The issue, as with the rest of the run, is a spectacular display of artists working with the dialogue. The scenes where we see Odin, and the history of The Hunt, are spectacular. I’ve said repeatedly, the art is one of the main reasons this book excels with each issue.

Lucifer #18 is stacked full with its share of gruesome horror. However, one of the best moments in it is when Lucifer finds the mask of Mazikeen. The slight bit of emotion we get to see in Lucifer is a rare but pleasant surprise. As a reader we are so used to Lucifer’s sarcastic, confident tone, it is interesting to see him vulnerable from time to time. The art team did a great job with that.

What Does Lucifer #18 Bring?

Lucifer #18 inches us closer to the end of this sensational storyline. Will Lucifer find Mazikeen alive? What will happen to the Hunted God with Odin? Questions that leave the reader wanting the next issue right now. That is exactly what a comic book is meant to do, and Dan Watters has done it repeatedly. The next issue is sure to answer some questions we have while also adding some new questions a well. Lucifer has a lot of work to do on the coming issues.

Between finding Mazikeen and getting back to The Hunted God in time, I’m not sure even Satan can manage that task. Who am I kidding? I’m sure Lucifer knows exactly what he is doing.

Learn The History Of The Hunt In Lucifer #18
93
Odin