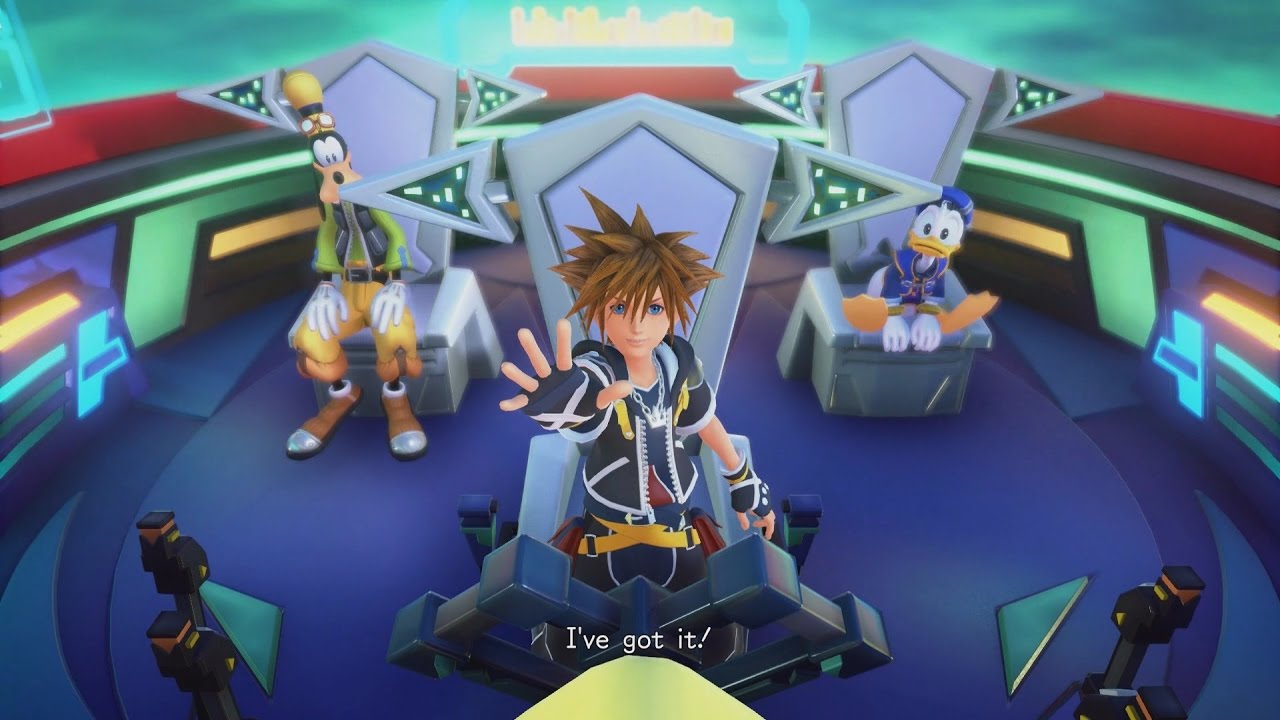 Kingdom Hearts As A Reflection On Travel And Life

There are few gaming franchises that garner the same dedication to fans as does Kingdom Hearts. Patience is a virtue, as some may say, and in this fandom, patience is plentiful. With January’s release of Kingdom Hearts 3, fans new and old were drowning in tears, cheers, and in my case, pondering. For me, the story’s journey is an inspiring reflection on my own, and I was not expecting to find that here. If you have ever done something outside of your comfort zone I think you will identify with my journey as well.

Kingdom Hearts And The Roads We Travel

There is nothing quite like leaving one’s home, knowing you will not see it again until years later. As you wait for your departure, you recognize that you will not see your hometown as you once did; you will have changed. Not only will you change, but also the home you are leaving behind. What you know as your home will become a memory, reforming as you build anew. Sora’s journey is analogous to long-term travel and the joys/struggles of living abroad.

Sora is constantly moving forward while remembering what he is fighting for. There is an unspoken lesson here: the things we truly want are closer than we initially thought. Somehow, this quirky and ridiculous series managed to speak to something so integral to the human condition. I have only recently jumped on the Kingdom Hearts bandwagon and played the entire back catalog. Having caught up on the story, I see a mirroring of myself in Sora’s growth. More specifically, I found a similarity in Sora’s transition from idealistic dreamer stuck on Destiny Island to an idealistic dreamer who is now also a world(s) traveler.

Whether you are a frequent traveler, living outside of your home town, or simply a fan of Kingdom Heart seeking new interpretations, I think you will find something familiar herein.

The Consequence Of Travel

Leaving the United States to live abroad was an easy decision; I wanted to broaden my worldview and see things I had never thought I would be able. The opportunity to study a Master’s degree and a new language and culture was a golden dream to me. I never could have anticipated just how much the journey changed me (I like to think for the better). This change did not come easy, and the struggle can make or break a person.

Replaying the first hour or so of Kingdom Hearts brought back memories of this transitional stage: from the naïve wistfulness of grand adventures to the harsh but beautiful reality of becoming truer to myself. Sora and Riku go through this transitional stage as well, and though they took different roads to get to the same destination, they undoubtedly benefitted from the growing pains.

After Sora’s home is destroyed, he awakens in an unfamiliar place: Traverse Town. Sora, confused, scared, and disoriented, is completely alone. Bewildered, he makes his way through the different districts, fights not-Squall, and eventually finds his place with the friendships of not-Squall, Aerith, Yufi, and eventually Donald and Goofy. In a way, that initial confusion and fear are similar to the lost feeling one has when living in a new place. It can take time to reorient and adjust oneself back into a comfortable routine.

Culture shock occurs on varying degrees. For me, culture shock came from having left my home country alone and not having contacts where I was headed. I had NO idea what I was getting myself into, and I learned to be active in the process of assimilating into my new home. In the beginning, I had no idea how to speak Mandarin, much less order food so, like Sora, I had to rely on new friends to help me along. Without help from locals and more experienced individuals, one cannot learn how to adapt.

In Sora’s case, his friends helped him grow stronger and without whom he could become the hero we know. Alternatively, Riku was not given the same support and thus struggled to become what he wanted to be. The people we surround ourselves with make the transition so much easier.

Unlike me, Sora’s journey is almost nonstop which gives him a sense of rootlessness. He does not return anywhere unless the story dictates he needs to. By comparison, in Hollow Knight, The Knight constantly returns to the village of Dirtmouth to purchase maps and upgrades; there is a consistent return point for The Knight. Sora has no similar hub and has no fort or world to maintain resources. Everything he needs is provided by Moogle Shops located in every world.

Rootlessness is a struggle for many long-term travelers. Without having a ‘permanence’ many people feel as though they are losing touch with others, and sometimes, themselves. For Sora, having his constant companions Donald and Goofy mitigates this issue, but he indirectly references an isolation. He lost touch with Mickey and Riku when they were travelling in The Realm of Darkness. Sora cannot develop skills that stationary living requires, like knowing how to use a computer. In both cases, he presents a similar frustration as people who frequently travel.

The Passage Of Time: Life And Locational Changes

No matter how much we wish we could go back to remedy our mistakes or regrets, life goes on and we have to persevere through the good and the bad. As I was visiting the United States last year (the first time in several years) I knew I had changed significantly. Living away from my birth country broadened my perspective. Returning home can present challenges.

A noticeable improvement in Kingdom Hearts 3 is the sense of change in each world that Sora visits, and because of this, the sense of time progression heightens. Everything in Thebes was on fire or crumbling when Sora, Donald, and Goofy entered the city for the first time. Citizens are trying to run from the hordes of heartless, not to mention the wrath of the Titans. Hercules, with the help of Sora, is able to repel the invasion and quell the titan’s wrath. What happens when everything is settled? The citizens rebuilt their city.

A Sense Of Returning

When Sora returns out-of-story to Thebes, he sees remarkable changes to the city. Where once the fires hindered movement, now clear walkways are available. Not only that, the citizens have begun rebuilding the chunks of walls and statues previously scattered on the ground. People are returning to Thebes and are slowly rebuilding their lives. There is a real sense of time passing in Thebes which respects the amount of time Sora and crew are away on their journey.

In a similar way, people are not stagnant. Our friends and family have major life changes (pregnancies, jobs, etc.) just as much as you go through. The towns and cities of the home also change as new businesses, buildings, and people move in. Even if we try to anticipate the changes, the reality can be far from our imaginations. There is much to be said about the image of the home we have in our heads as being a canvas on which we attach all sentimental values versus the reality of the changes.

One of the criticisms of Kingdom Hearts 3 I have is the way Sora, Donald, and Goofy interact with other characters in the stories within the Kingdom of Corona (Tangled) and Arendelle (Frozen); if the trio were taken out of the cutscenes I would be watching the movies.

However, their involvement in the story and worlds mirrors how travelers interact with the places they visit. In The Kingdom of Corona (one of my favorite worlds), Sora is not involved with the deeper struggles of the movie, nor is he aware of the political problems of a princess being kidnapped. Instead, he meets and befriends new people as well as partakes in local festivities; there is a separation between him and that world’s cultural/political issues.

For many travelers, their vacation or their purpose is different from the day-to-day of the local residents. This is not bad itself; the consumption of cultural products is normal for a traveler, while locals have to deal with daily necessities like paying the bills and getting to work. I have seen people who value the historical aspects of the country over the highly modern culture of the present.

In Kingdom Hearts, Sora is the hero and he deals with universe-sized problems. He comes swooping in when things are already bad and leaves after he saves the day. Sora may care deeply for his friends, but he does not have to deal with the aftermath; his attachments as a world traveler are different than those of the residents.

A Traveler’s Reflection On Kingdom Hearts

It is without a doubt that Kingdom Hearts is an amazing franchise. Despite the crazy antics and seemingly incomprehensible overarching plot, the stories told within communicate the human condition. If you still have not played the game yet, consider whether it is worth the purchase. The fact that I found a connection within the series with my own experiences living abroad still astounds me.

What makes travel so fulfilling are the same reasons why I play games: to experience something completely new. There is nothing like traveling and I have learned more than what I could have stayed where I was. That was what Sora, Riku, and Kairi wanted at the beginning of the series: to see new things. Like me, these characters achieved their goal, even if it came about in a different way.

What is the lesson here? Explore and get out of your comfort zone, you may be surprised by what you find.