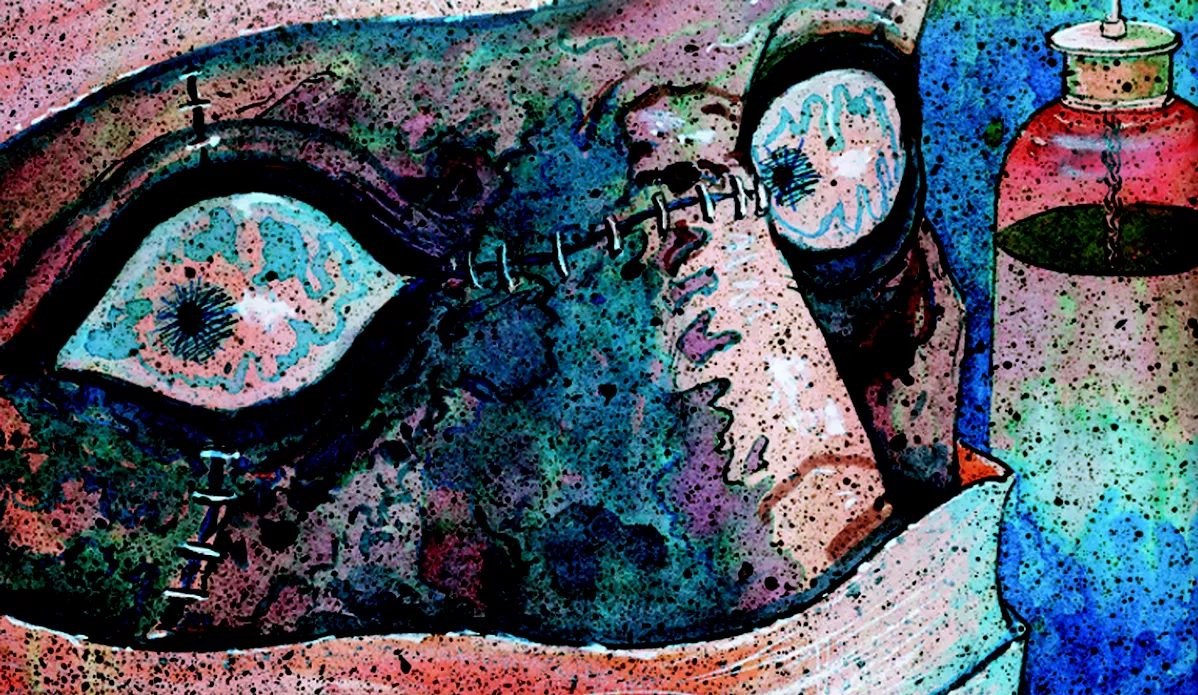 Mary Shelley’s Frankenstein has been adapted into almost every medium imaginable. Over two hundred years after its initial publication, Frankenstein has gone through many cultural and narrative changes. Victor Frankenstein’s creature has become such a classic monster that it warrants constant reinterpretation and parody.

In pop culture, Shelley’s novel is somewhat at odds with the classic monster movie, which made huge changes to the original story. However, iconic horror artist Junji Ito created a manga adaptation straight from the novel. Ito’s Frankenstein covers the entirety of Shelley’s novel and blends his mastery of visual horror with the iconic sci-fi monster story.

Ito’s work is notable for its duality between beauty and horror. Though known for his disturbing themes, Ito usually draws characters very beautifully and delicately (until the horror sets in). Frankenstein was no different. Ito illustrated the gothic beauty of 19th-century European clothing and architecture, and the characters all have detailed designs.  This contrast is part of Ito’s style. The dense visual horror stands out even more when placed against a traditionally attractive manga style.

Also, as Ito’s manga usually takes place in Japan and utilizes Japanese themes and horror, Frankenstein is a different setting and era for Ito. But his style blended seamlessly with Frankenstein’s setting and mood. Ito’s stark blacks, crosshatching, and heavy pen work are reminiscent of 19th-century etchings as much as it is a traditional manga look. The creature’s design especially captures both Shelley’s description and Ito’s passion for illustrating monsters.

Many consider Shelley’s Frankenstein to be the first science fiction story. But Frankenstein is as much a horror tale as it is a science fiction story. The novel popularized many tropes that are now worldwide staples for sci-fi and horror like experimentation, mad scientists, the undead, and themes of anxiety and existential crisis. It’s no surprise that Ito’s style thrives with Frankenstein to showcase both the novel’s terrifying concepts and his own artistic range.

Ito’s mastery of page-to-page suspense lent incredibly well to the slow-paced novel format. By using many silent panels and moment-to-moment transitions, Ito generally makes scenes draw out that lead up to “jump scares” between pages. Its use in Frankenstein echoes the novel’s theme of creeping dread, as embodied by Victor. Ito’s ability to create gruesome expressions and body horror illustrate both the inner strife felt by Victor and the physical horror that is the creature. The manga’s intense artwork conveys the dense, horrific experiences that both Victor and the creature narrate in the novel.

Changes Made To The Original Frankenstein

Junji Ito actually changed very little of the original Frankenstein narrative despite the translation into a different medium. Ito’s Frankenstein keeps a unique framing device of narration from Shelley’s novel, something often overlooked in other adaptations. Like the novel, the manga began with Walton on an arctic exploration finding Victor Frankenstein, who tells Walton his terrible story. The original novel had Walton telling Victor’s story. At times, Victor recounted what the creature had told him, making Frankenstein a layered series of flashbacks. Ito’s manga did this in a way that avoids confusion by separating Victor’s narration and the flashbacks with text boxes and page layouts. Additionally, Ito included the majority of the novel’s characters and Victor’s upbringing.

Ito generally followed the novel’s plot and the physical descriptions. The significant change was expanding on the creature’s “bride.” In the novel, Victor destroys the female creature he made to appease his creation. She never comes to life. However, the climax of Ito’s Frankenstein features the female creature coming alive in one of the manga’s most horrific scenes.

But this change served his short story format well by eliminating some of the slower parts to the novel. Additionally, Ito’s characterization of the female creature adds an extra layer of horror and sympathy. By giving her a short moment to be alive and rejecting Victor and the creature, Ito expanded on themes of consent and body autonomy that are already present in Shelley’s novel.

Ito Demonstrates The Potential For Comic Adaptations Of Literature

The transition between mediums is often difficult to do successfully. This is particularly true of written media into something visual. Often, beloved stories are heavily altered and changed to meet the needs of a new medium and wider audience.

But Ito’s manga avoids many of the pitfalls that leave adaptations lacking. Ito follows the characteristic format of Shelley’s novel but uses his medium to convey the novel’s iconic horror in a new way. Ito’s manga was an unexpected but perfect format for adapting and celebrating Shelley’s Frankenstein. Ito’s Frankenstein is an example of the huge potential comics have as literary adaptations.