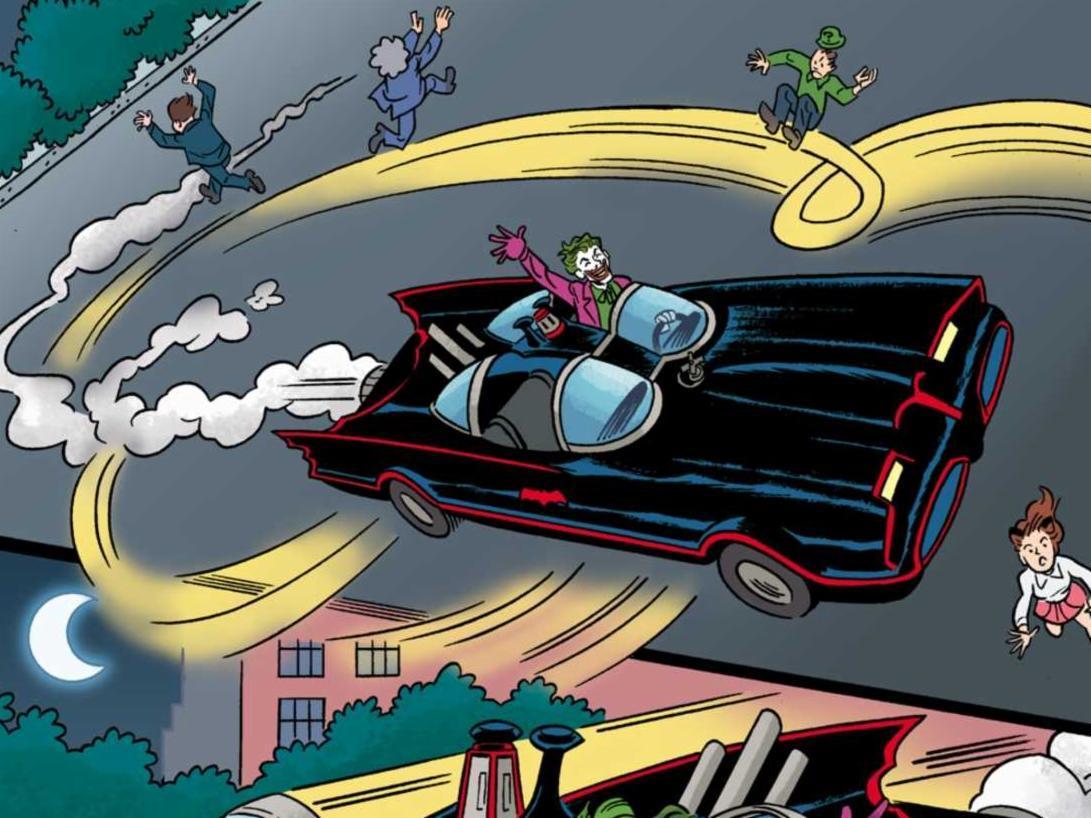 Joining Forces At the End In Archie Meets Batman ’66 #6

A city in peril, teens on the run, and Batman captured. Gotham’s worst villains are the masterminds behind these events and are incredibly pleased with the results. We last saw our heroes making a getaway on the Batboat. Now it is up to Robin, Batgirl and the Riverdale teens to save this wholesome town. Every issue has led to this, the final issue of Archie Meets Batman ’66 #6. What does the final issue of the crossover series have in store for everyone?

Well, put on your tights and go-go boots for one last time and find out what Archie Meets Batman ’66 #6 has in store for everyone.

The story begins with a recap of what has happened in the series so far; villains, brainwashing, kidnapping, and a town in peril. The comic then cuts to the Gotham Villains having the time of their lives as they believe they have won. With all the adults under their control and Batman tied up, the group begins to taunt Batman. Then, the story cuts so show Batgirl, Robin, Archie, and the gang at his house. They are trying to think of a plan when Reggie forgets he has one of the Siren Eggs that are controlling everyone. Dilton says he’ll tinker with it, but he needs a supercomputer.

Suddenly, Batman contacts them with morse code and mentions that he has a supercomputer in his Batmobile. They all decided they needed a distraction to get to the Batmobile, and Archie had an idea. All of them burst into the town square in a superhero outfit, and Archie’s new Batmobile. When they begin to fight, Archie frees Batman, and Dilton fixes the Siren Egg. Suddenly, all the adults break from their trance and arrest the Gotham Villains. As adults apologize and the heroes say goodbye, Archie invites the heroes to lunch at . The story ends with everyone having a great night dancing and learning the Batus. There it is, after six issues, we finally get an end to the big crossover that was years in the making.

There is a flimsy dilemma with this issue. As the story focuses on Archie’s gang and their interactions with the Dynamic Trio, many questions pop out in this issue. The Gotham villains are taking over the town by brainwashing all the adults. In turn, a question pops up; “Where are the other teens?” Archie has a lot of high school pals that would have gladly helped him out.

We Got A Batgirl & Robin Moment!

Finally! Batgirl and Robin finally showed their true colors. They are smart, resourceful and powerful. It was an enjoyable moment to see everyone working together with Robin and Batgirl leading. Instead of doing a quick plan and charging into a fight, they truly thought about the situation. This was just a great moment for both of these characters to be taken a little more seriously than how they were last represented.

There were wonderful Easter Eggs in this issue that will make fans of both properties quite happy. First is the big fight scene in the town square; as Archie thinks of a distraction for the villains, he makes everyone dress up in superhero outfits. Instead of ridiculous self-made outfits, the story could have gone with, they all came out in Archie’s Superteen outfits. These outfits come from an older series with the same name where Archie and the gang have superpowers. These characters recently came back in a two-issue mini-series titled, “Archie’s Superteens vs. the Crusaders.” As this series sticks with the more realistic non-superpower route of Batman ‘66, it is great to see a nod to Archie Comic heroes.

A small Easter Egg that creates the loudest laugh is what Betty tells Batgirl. As everyone is saying goodbye, Batgirl tells Betty that she should come to Gotham sometime. Betty replies that she actually has a great Aunt Harriet Cooper that lives there. Robin then looked shocked, saying, Aunt Harriet? Any Batman ‘66 fan will know that Aunt Harriet was Robin’s Aunt in the show. There are questions on why she could take care of Robin and why she lives at Wayne Manor; it’s great that she’s related to Betty. It is arbitrary and comes out of nowhere, but overall the moment is a great nod to fans who watched the show. Nonetheless, now there is a reason for the Archie gang to visit Gotham — they already have the costumes lined up!

Quite The Bumpy Road In Archie Meets Batman ’66 #6

In the end, this series had its ups and downs. From a grand beginning to a few bumps in the road, this finished with a genuinely light-hearted ending. It could have been worse, but all in all, it was an excellent crossover. As I’ve said in my previous review, it felt like the series was ending there and that there was no reason to add Archie Meets Batman ’66 #6, and I still believe that. This issue was pleasant, but I think it would have fit better in the fifth issue than having a separate issue for the conclusion. They could have even made a Bat-sized conclusion for the series, but as the comic turns into a trade soon the last two issues will work well together. As you would read them back-to-back.

As an issue alone, it would have felt tacked on, but the Easter Eggs and comedy bits truly helped the comic in many ways. I personally like the nod to Scooby-Doo; when the villains are arrested, Penguin and Joker are angry and Jokers’ last words are commenting on how the teens are tattletales. The first thing I thought of was Scooby-Doo saying a remark of, “You meddling kids,” it gave me a slight chuckle.

Thinking about the series with the addition of Archie Meets Batman ‘66 #6, I actually have mixed feelings about this series as a whole. I do believe that there could have been some improvements. I would have liked to have seen more time dedicated to the Dynamic Trio and Archie’s gang together instead of in just the last two issues. Still, what we received was delightful and will probably work better in a graphic novel that separates the issues.

As both of these properties were around at the same time it was nice to see them together. I concur with the choice to have Batman ‘66 meet Archie more than the Batman of today meeting them. There will probably be a lot of brooding darkness, and if that is ever arranged I think they should go on a more mature route than a family-friendly route. Since this series was short-lived (only lasting six issues) I hope there are more stories to come in the future. If you’re a fan of classic Archie Comics, Batman ‘66, or the Silver Age of comics then this is the series for you.