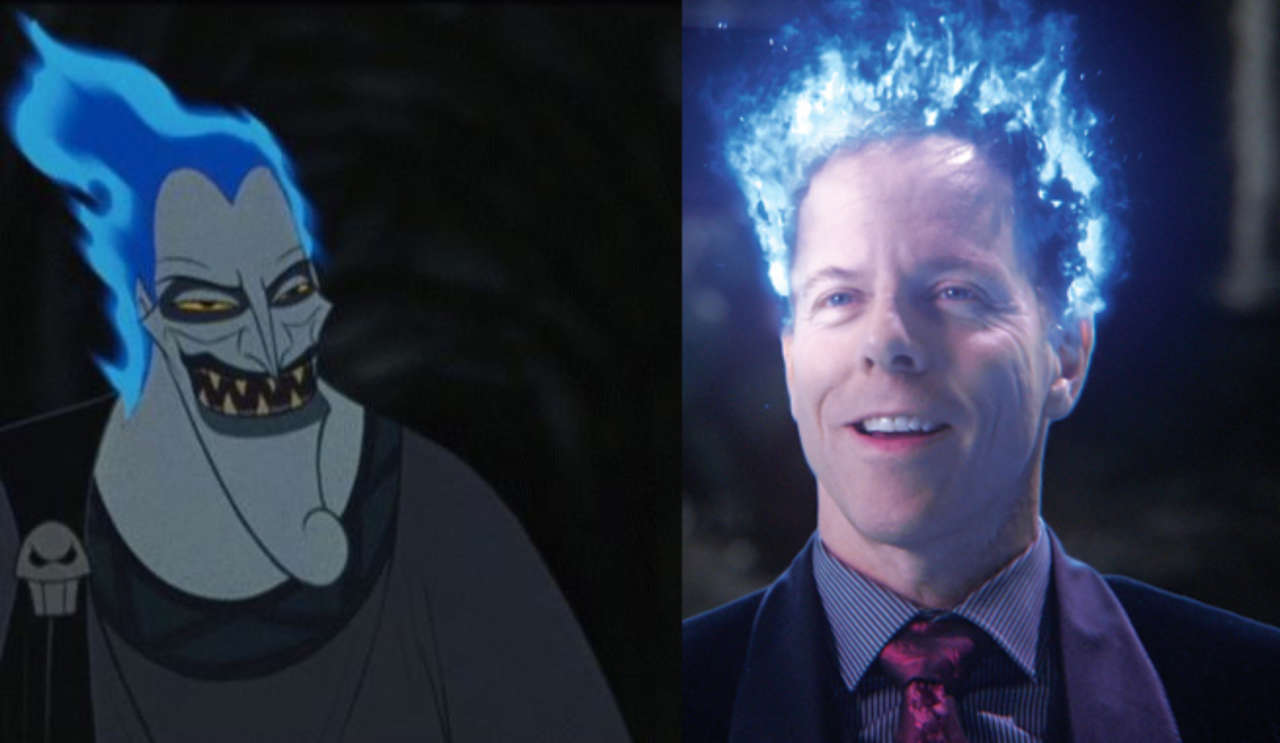 Is Hades A Villain?

Who is Hades? Ancient History Encyclopedia describes Hades as

“both the name of the ancient Greek god of the underworld and the name of the shadowy place below the earth which was considered the final destination for the souls of the dead.”

We might know him as a sassy, quirky character from the movie Hercules or the tv show Once Upon a Time. In both of these adaptations, he is depicted with blue flames for hair and a snarky personality. The audience automatically knows he is the bad guy.

The way people talk about him and the clothes he wears are enough evidence for the audience to come to this conclusion. Although this remains the same across adaptations, the question we must ask is, is he really a villain?

In the movie Hercules, our story begins with Hercules as a baby. We follow him as he grows older and starts to fall in love with a woman named Meg. We quickly learn that Meg is working for Hades and Hades wants her to help him defeat Hercules so he can take Zeus’ place and rule over Mount Olympus. Initially, he seems like the bad guy. He’s evil and wants to keep Hercules from becoming a god so that he can one day rule Olympus. We see him kidnap Hercules in the beginning of the movie and then try to kill him in the end. He almost succeeds, but Hercules saves the day in the end.

At first, I too believed Hades to be a villain, but looking back on it now, I’m not sure if that remains the case. He was just trying to get what he thought he deserved. Was it really fair that his two brothers got to rule over the sky and the seas when he was stuck underground for all of eternity? And with no opportunities to trade places, Hades had no choice but to try and overthrow Zeus. They expected him to remain stuck in the underworld forever, reaping and torturing souls. Even if he enjoyed it, it’s not fair that he was the one who had to remain there while his brothers got to live out their days above ground. His brothers got to breathe fresh air and had the chance to interact with people who are alive. Hades has no chance for this.

Hades In Once Upon A Time

In the show Once Upon a Time, Hades appears to us in a more familiar form: as a human, instead of a cartoon. He is still a god who possesses many powers, but the face we see him with is one we know. For this reason, we are able to relate to and sympathize with him more. We learn that he is in love with Zelena, the wicked witch in the show’s story of The Wizard of Oz. The god of the undead seems to have a heart after all. We also know that he is trying to prevent the main heroes of our story from returning home. They made their way to the underworld to rescue someone. Hades wants them all dead and wants them trapped in the underworld forever.

This might seem malicious at first, but Hades has his reasons for wanting them dead. They are disrupting the balance of the underworld. They are setting souls free and giving lost souls hope. This hope allows the souls to move on from the underworld to a much better place. As god of the underworld, Hades simply cannot allow this. He cannot let souls be set free because it is his job to torture or deal with those souls. If all of the souls disappear, he will be out of a job, so of course, he is going to take measures against them. He’s not going to just sit back and watch. They can’t assume that their actions have no repercussions, especially when it comes to the god of the underworld.

Hades Looking Out For Himself

We might still think Hades is the bad guy, but we can’t deny the fact that he was just looking out for himself. He did all of the things he did to protect himself. He wanted the power that he thought he deserved. To do this, he was willing to do whatever was necessary. Looking at it now, we can see that Hades’ intentions weren’t necessarily ill of intent. It’s not completely his fault that to gain power, people have to get hurt along the way. He was just trying to get what he deserved since he got the bitter end of the deal with his brothers.

He didn’t think it was fair, and frankly, it isn’t. Why should he have to be the one to remain in the underworld? Why couldn’t it have been Zeus or Poseidon instead? These details aren’t mentioned in the movie, but they could have at least agreed on switching places every once in a while so everyone would get the chance to rule each part of the world. Instead, they chose to be selfish.

Was It Zeus and Poseidon’s Faults?

Zeus is the god of the sky while Poseidon is the god of the seas. They are both the brothers of Hades. But instead of acting like his brothers, they just cast him aside to rule over their respective places. They never gave him another thought unless someone mentioned him. And even when he was mentioned, it was always with resentment and loathing that they spoke of him. Nobody wanted him in Olympus at the beginning of the movie Hercules, understandably since he did try to kidnap Hercules. But maybe if they didn’t treat him so badly to begin with, he wouldn’t be filled with so much resentment and hatred against his brothers.

After all, it was only by chance that Hades was the one who was given the underworld to rule over. He was just the unlucky one who got thrown underground for all of eternity. Since he is the oldest, you would think that he would at least have some sort of say over where he ruled. But no, this didn’t happen. They were just given their respective realms and expected to be happy where they were. If they treated him like family, like a brother, maybe Hades wouldn’t have tried to kidnap and get rid of Hercules’ power. Once treated like their equal, he might not have done any of the bad things that he did or he wouldn’t have tried to take over Olympus.

If his brothers had just talked to him and shown compassion, they could have been a happy family. They could’ve all been together, but this didn’t happen. Instead, he was cast aside and forgotten. He was the bad guy. Nobody wanted him around. For all of these reasons, he did the bad things that he did. Because he wasn’t shown any love, he became this villain that the rest of the world sees him as. And maybe, just maybe, Zeus and Poseidon only have themselves to blame