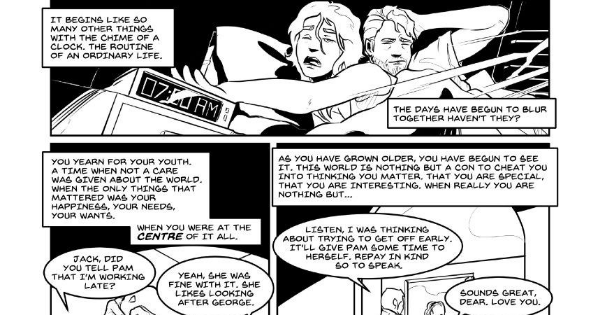 Indie Artist Spotlight: Kyle Scher’s ‘All The World’s A Stage’

At The Daily Fandom, we love to support and help promote indie creators. Nothing makes me happier than to introduce author Kyle Scher’s first self-published project, All The World’s a Stage. What else am I here for other than to critically look at the media we consume, I wanted to unpack it. The comic is found here and check out the amazing artist here. If you want to know more about the artist behind All The World’s Stage, you can find our exclusive interview here.

The Art Of All The World’s a Stage

Flygohr has an amazing sense of scale and perspective in All The World’s a Stage. Especially in regards to how bodies move in space. The minimalist backgrounds don’t actually create depth. Instead, he’s creating depth through the positioning of bodies within the panel. It’s astonishing, in comparison, how many artists can accidentally create a very flat world. The composition is hard, and the existence of panel borders often results in a sort of talking heads, dress up doll copy and paste with artists who aren’t as experienced. This comic is also presented in black and white, which means Flygohr has to take into consideration the fact that color won’t be part of the composition.

Furthermore: The Lack Of Color In All The World’s a Stage

Inks and dark shadows need to create the silhouettes and framing that helps distinguish characters and space. I find it effective here. In fact, sometimes color detracts from art or makes things too busy. I have a soft spot for black and white work. There’s only one place where the art falters for me, and that’s in the bottom three panels of the first page. It can be hard to tell who our main character is without color.

However, this could also be considered a layout issue and bleeds into the fact that ‘Lillian’ is supposed to be a cog in the machine whose individuality doesn’t quite matter. Writers often struggle to publish their comics without artistic talent. Most webcomic artists wind up having to be both writers and artists. Scheduling and negotiation between two people can kill what is ultimately a free passion project. I think Scher and Flygohr are starting off strong, and I think the art is currently supporting the mood and tone Scher is aiming for. I hope to see them continue this partnership.

The Writing Of All The World’s a Stage﻿

Four pages mean that each page has to be packed with content in a way that doesn’t happen in comics very often anymore. The density of words and panels on each page can be overwhelming. However, it’s worth letting your eyes adjust to let yourself experience the story. Scher is an incredibly wordy writer, which is obvious from just a passing glance. This comic makes heavy use of a narrator but is actually surprisingly light on dialogue. It might be interesting to see that pushed further. As it stands, this is not your typical comic narrator.

Sentient and directly influencing the events of the comic, this narrator, and the events that transpire, are cynical and odd. In fact, this story plays more into the style and pacing of a twilight episode than your typical modern story. The characters act as moving pieces on a chess board, and the narration acts as a firm but the undeniable barrier between the audience and empathizing with said characters. This is very much like watching a stage play, or an early black and white film. This is effective because it’s short.

In a longer story, the distance between the reader and what the characters are experiencing could be jarring; or else require a much longer epic to justify. Certainly, it’s a stylistic choice and given the ending of the story, one that’s strength lies in the fact the only character with agency appears to be the narrator. We, as readers, are watching the equivalent of puppets move about the stage. The real character we should be watching is the narrator, which is what lends this story it’s a Twilight Zone feeling as well.

This comic is a Twilight Zone episode in comic form, so there’s a lot of foreshadowing that’s easy to miss on the first read through. I had access to the drafts and so got a glimpse into some of the details that I thought would be fun to point out.

The eyes of the characters dilate when they are losing their agency. It’s a small detail, that’s easy to miss, and I only found it in the script. S enough, upon going back, characters who are being manipulated by the narrator are always a little off in the eyes.

There is also a foreshadowing in the image of the “main character’s” father. It’s addressed in the narration, but it’s not something I picked up on my first read. The clouds outside the window of the house also look ever so slightly like a face. It’s small, but given the limited space, I did find it fun to go back and pick out some of these details. There are others, but I feel it’s better if you get the chance to read it yourself. Kyle Scher and Flygohr have all and all done a fantastic job. This is Scher’s first published comic, and his hope is to continue creating stand-alone stories in the near future. I think it’s a talented debut. Perhaps we might even see an anthology collection someday. In the meantime, follow him on Tapas for his next comic, which will hopefully drop by early April.

A worthy debut for an author who will hopefully be releasing new content soon. If you want a quick read, and some Twilight Zone plot twists, check out Kyle Scher's work.
PROS
ART
COMPACT STORYTELLING
CONS
SHORT
90