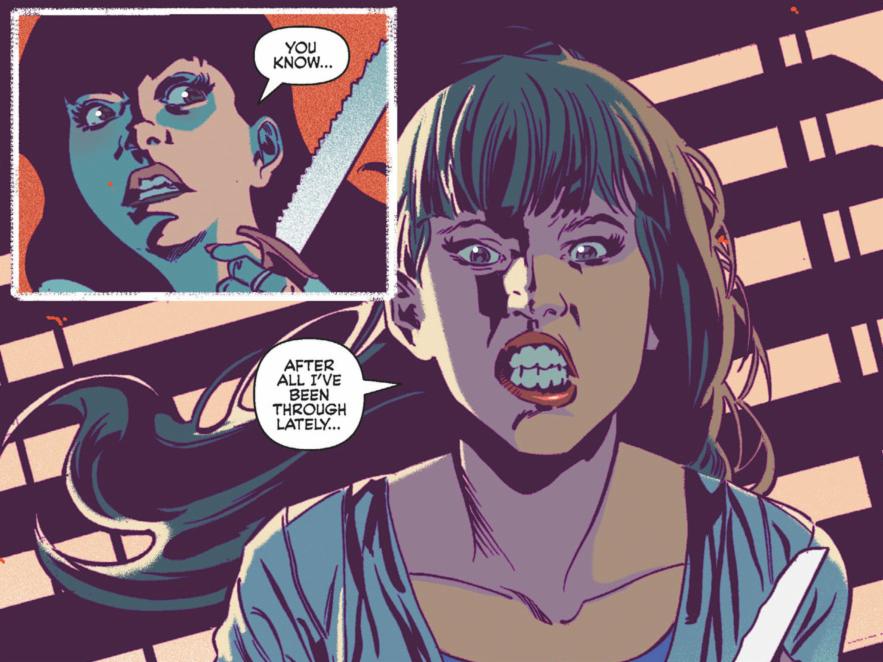 Hungry For Blood In Jughead The Hunger vs. Vampironica #2

The wholesome town of Riverdale has a new problem and this time it’s not werewolves, it’s Vampires. Yes, readers heard correctly just as Riverdale was about to be a safe place, a new threat has arrived in Jughead the Hunger vs. Vampironica #2. Issue #1 of this crossover dealt with Vampironica realizing that she did not defeat all of the vampires in Riverdale.

What makes matters even worse is that people are vanishing out of thin air. By the end of the issue, she disappears as well. Now that she is gone what will happen to Riverdale? Sadly, readers will have to wait and see because this new issue focuses on the Jughead the Hunger Universe. In this Hungerverse the gang just found a new case to solve and Vampires may be to blame. Get ready for a new chapter inside the Hungerverse in Jughead the Hunger vs Vampironica #2.

Issue #2 begins at Pop’s Diner where the WolfJug is chained in the center and everyone is ready to kill him. Jughead suddenly wakes up from his nightmare where Betty and Archie are watching over him. He begins to explain that the nightmare he had was very odd because Veronica was there and she was a vampire. Betty disregards his concerns and tells him Vampires don’t exist.

Suddenly, Betty gets an alert from a surveillance camera at Pop’s Diner and decides to investigate. They then found Pop inside the diner with a vampire bite on his neck. As they are all shocked, Betty mentions that Vampires don’t exist. She then tells the story of what happened to all of the vampires. As Jughead waits with Pop’s, Betty decides to take Archie to investigate outside. When the duo began to investigate them they were stopped in their tracks when they behold a terrifying scene. As they are about to pull out their guns and fight gruesome creatures Vampironica appears.

The Right Choices Made

This crossover would still have been entertaining having Wolfjug invade her Riverdale, but the series may have become stale. The series would have to play up how all of the mortal townspeople are afraid of Jughead. Which would lead to Vampironica fighting him and then finding out it’s a misunderstanding. Everyone already saw this idea play out in the Jughead the Hunger series, so it would have been a bad decision. Having Veronica end up in the Hungerverse is a perfect choice because there are more interesting characters to play within the Hungerverse. With Wolves, Frankenmooses, Bingo, Action hero Betty, and Archie the writers could do a lot with these characters.

Something Odd In Jughead the Hunger vs Vampironica #2

Both prior series’ before the crossover had wonderful art. They both contained art that was just as satisfying as the story being told. In Jughead the Hunger vs. Vampironica #1 the art was done very well, resembling a mixture of both art styles. This issue sadly doesn’t have the same interesting art style. There are moments in the book where there are close up on characters faces and they look terrifying. Some examples are on page four, five and eight.

Most of the artwork in the book is done excellently but the artist does something odd with the mouths of both Jughead and Betty on these pages. Betty’s mouth doesn’t even have a variation on page five. She looks like she is constantly saying yeah instead of the dialogue she is given. The book has an engaging style that isn’t bad but who knows what they were thinking when drawing their mouths.

Already Hungry For More In Jughead the Hunger vs Vampironica #2

Jughead the Hunger vs Vampironica #2 is a step in the right direction for the series. Crossovers are sometimes hard to get through. As of this issue, this crossover is certainly on the right foot. In all honesty, I was not a fan of the first issue. It felt more like being a set up for a sequel series for Vampironica than the beginning of a crossover. This issue feels more like the beginning of a crossover. It’s a new challenge everyone has to face, and they all meet the sensational Vampironica at the end of this issue. It’s the perfect set up to get these characters together. I can’t wait to see how everyone interacts with each other, but we sadly have to wait till the next issue. The issue is a home run for Archie Horror and it makes me think of where they can go from here.

I think it would be interesting if this crossover ends with a hint that the Blossoms from Blossoms 666 were watching this whole event. It would be mind-blowing, plus Archie Comics could make these horror crossovers an event like the old Universal Monster movies did back in the day or the CW crossovers of today. This series just opens the door to new adventures. As we come to a close though, I urge everyone to read this crossover. Other than my tiny points, this is a stellar series and an issue that you should not miss. Let us hope that Vampironica and the Archie gang stay safe until the next exciting issue arrives.