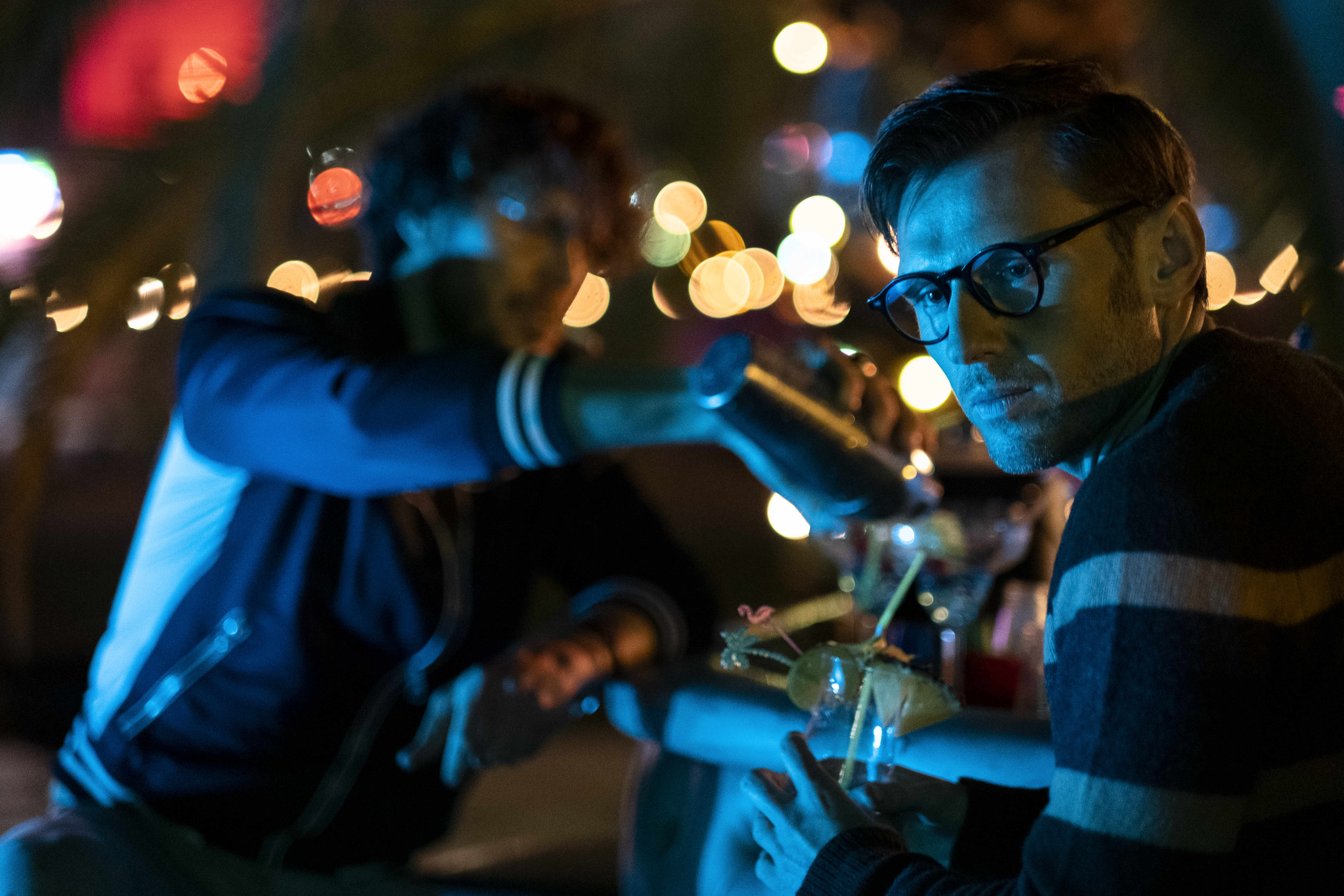 Hulu’s Into The Dark series is back with an April Fools installment titled, I’m Just F*cking With You (get it?) Blumhouse has created and released seven films on Hulu between 2018 and now. All of which have had their shortcomings, but we have a list of the previous films ranked here and a review of the first-ever Blumhouse release, The Body. Nonetheless, as we reach the seventh installment, I’m Just F*cking With You, we get an adequate movie. I’ll explain…

I’m Just F*cking With You, released on April 5th, 2019 (some say April 1st), is a story about a man and his sister who endure a (one) night of increasingly frightening practical jokes from a motel owner. It stars Keir O’Donnell (Larry Adams), Hayes MacArthur (Chester), and Jessica McNamee (Rachel Adams). It was written by Gregg Zehentner and Scott Barkan and directed by Adam Mason.

HA-HA, I’m Just F*cking With You

The concept of this particular installment is to be a horror-comedy. Most of them are straight fright-horror, but this one has some comedic element to it (it drops on the week of April Fools!) The former installments have been classic horror, and the closest to the theme of this one would be The Body. This one has some components of horror, similar to this one. At the beginning of this film, we got a magnificent theme song (or background song rather).

It is the catchiest tune I have ever heard in my life, and I can’t get it out of my head. That is already a huge plus. (Shout out to Chino Moreno.) Larry, the main character, is slightly odd. Honestly, Larry threw me off more than Chester did (and Chester was supposed to be the weirdo of the bunch). Larry has OCD, which can be implied, is a bit paranoid, and is an internet troll. The weirdest thing about him is that he is an internet troll to his… seeming ex-girlfriend who is now getting married? Mostly to everyone on the internet, but his ex is why he does it all. (Or, at least, that is what is implied.)

Guess What? I’m Just F*cking With You — “Concept”

The concept of I’m Just F*cking With You is… entertaining. The idea behind the ending is what is attractive. After you reach the climax, (middle of the film), you get this conception of horror. After you recognize that it certainly isn’t a joke anymore, you start to change your mindset. This happens in all of the prior films as well, there is a beginning (explain the plot), usually the climax (middle twist), and then ending (redeeming arc, sort of?). The character, who you think should have a redeeming arc, does so in an uncanny way. The main character, who is usually doing something immoral or has corrupt intentions redeems themselves by the end. (See: New Year, New You.)

Some of them startle you, but they all have this common theme within them. That is an aspect I dig about these films. You get to decide which one you want to watch and watch it, you don’t have to watch them all, they are all separate entities. But, concerning I’m Just F*cking With You and upon realizing that “Oh, shoot, Chester is crazy,” I started to root for Chester. I know, I know, I’m sorry, but at least he was consistent. This happened with New Year, New You as well; I had the same issue with Danielle. I wanted her to win, she didn’t, but I was rooting for her.

The Characters Are Solid In Into The Dark‘s Series

The absurd ones are perpetually the best characters, they are fleshed out, unreliable, and frightening. I especially savored Chester’s character. Being one of the few that were actually on the spooky side. (See: Down). The writing and plot for Just F*cking With You are appealing. There are moments that aren’t so important to the plot, but they do keep it on those tiers of ‘on the edge of your seat’ versus ‘is this a joke.’

You never know until the climax, well… even I still don’t know. The people who die are obviously dead, but the conclusion leaves it open-ended for Mister Troll-Man, Larry. As aforementioned earlier, we did a top three of the Blumhouse releases for Into The Dark. We have not done Down, Treehouse, or this recent installment yet. However, in the group of the previous two, including this one to make three, it lands at the top.

Guess What? I’m Just F*cking With You — “Acting”

Throughout I’m Just F*cking With You, Chester is the chief troll pulling pranks. One minute they think he’s cool, the next he was murdering police officers. Chester messes around so much to the point where you think the climax events are a game. Little do you know? The acting in I’m Just F*cking With You is adequate. Most of the films under this Into The Dark series have adequate acting. The actors are people that I am not knowledgeable about, they are brand new to me. It’s very personal because someone else may recognize them but I have yet to recognize one actor. The acting, based on that token, is what I am basing it on.

The acting , I mean Chester needs to get it together, but that’s his shtick. They all performed their personalities well enough for me to get secondhand embarrassment, which is the point for this one. Larry is the awkward guy, his sister is the secondary character who isn’t really in the movie much, and Chester is the psycho, mentally ill one, who is slightly creepy too. They perform their characters well, and that much is to be praised.

You don’t know what the big three are? Tsk, tsk.

The three major aspects of I’m Just F*cking With You are marvelous. Directing and producing in the series is always immaculate. They do a fabulous job and have a fabulous budget for the series because, honestly, the cinematography, directing, and production all together keep you engrossed in the film. Whether you think the film is good or bad, it keeps you involved with the production value of it. Nonetheless, the big three tap into the most vital part of the overall scope: how the viewer stays interested. If you can keep them interested, you can do pretty much anything with a film. Into The Dark‘s film anthology keeps you interested and I’m Just F*cking With You does the same as the six others.

Go watch it April 1st on Hulu Streaming and let us know how you enjoyed it or didn’t!