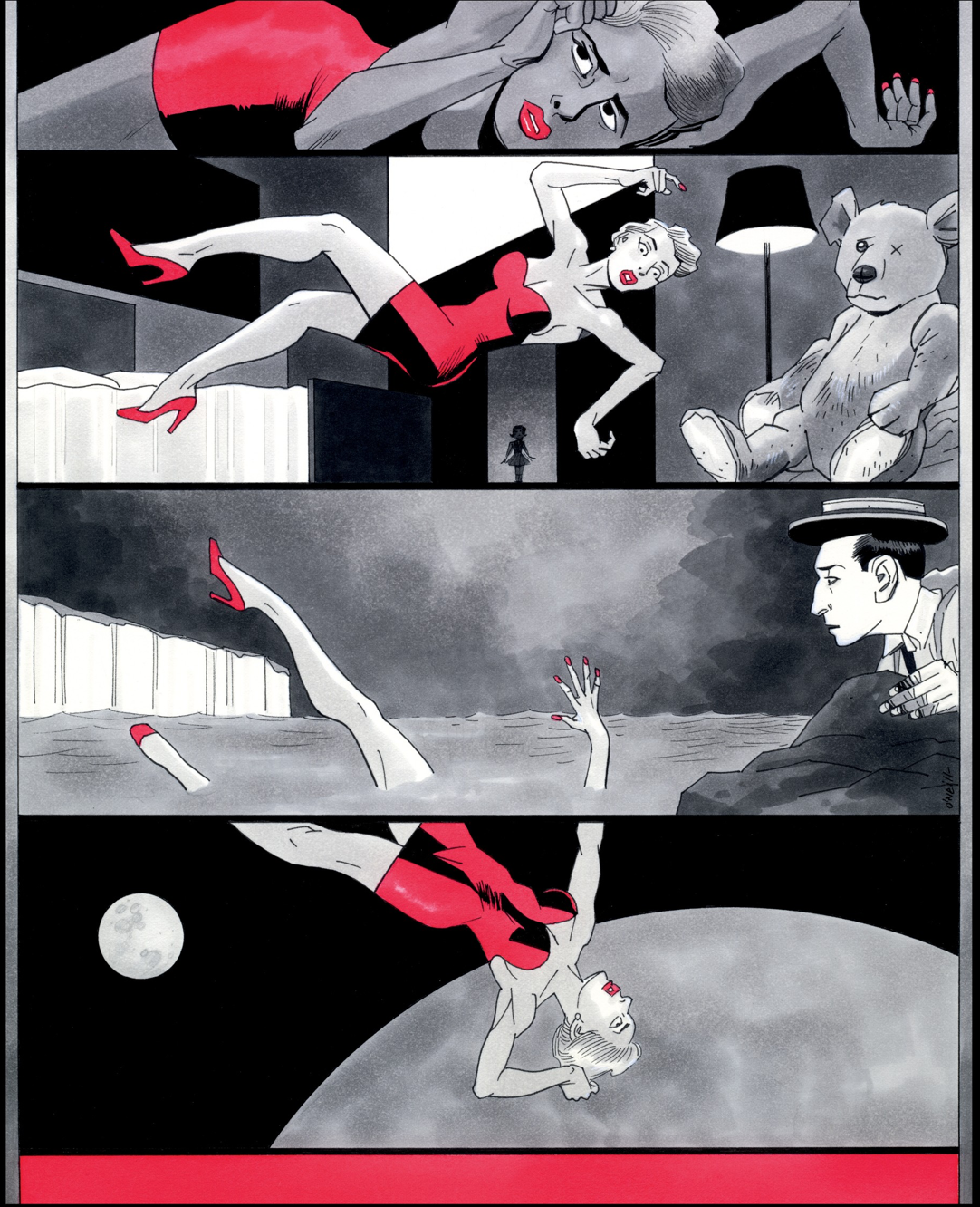 How You Died In Cinema Purgatorio #18

Alan Moore’s Cinema Purgatorio has already established itself as one of the best modern horror anthologies out there. Here at The Daily Fandom, we were on the edge of our seats to find out how the stability of creators would finish off their respective stories. Well, actually, they don’t! Instead, Cinema Purgatorio #18 marks the end of the first book of all the stories included.

Moore‘s intro in Cinema Purgatorio #18 is unlike anything we’ve seen before in the series. Instead of focussing on a historical celebrity, the camera turns towards the viewer. At last, we address the mysterious narrator. She enters the cinema, and the workers list off the reasons that they are there without any context.

At first the narrator does not recognize her own story, even as it unfolds before her very eyes. We watched the film with her, horrified at the filicide that brought her to where she is now. The real nail in the coffin, so to speak, is the realization that we’re not in purgatory at all, as the title would suggest. Instead, I believe Moore is trying to impart that the cinema is hell itself. That all the workers there are sinners being punished, forced to relive their crimes and pay off their debts.

As before, Kevin O’Neill‘s art in this section has been absolutely superb. His technique relies heavily on wide swatches of black spotting broken up by thin hatch lines for texture. The noir aspect of this lends the comic a captivating tone. His work brings to mind the art of twentieth-century illustrator Edward Gorey in all the right ways. O’Neill especially shines towards the end of this story, when all the characters from previous issues of Cinema Purgatorio appear, seemingly to haunt the narrator. He really gets to play with surreal, nightmare imagery.

Cinema Purgatorio reaches its conclusion with the narrator taking on a job at the titular cinema. She changes out film rolls and ponders her meaningless afterlife. In a fitting end, she will continue to tell the stories of the cinema to an audience much wider than us.

Garth Ennis and Raulo Caceres bring us the last issue of the first book of Code Pru. We’ve seen Pru deal with everything the city has to offer, from Frankensteins to succubi. But here we find her back where she started, tending to William the suicidal vampire. At this point, Pru is focussed on her own problems as she’s unlucky in love with a city police officer. She snaps back to reality, though, when William jumps out a window and explodes in the sunlight. Yeah, explodes.

Ennis’s juxtaposition of the supernatural with everyday drama has always been the heart of Code Pru, and it’s no different here. Even as Pru and Eric are extracting a stake from a depressed vampire, they can still chat casually about their own lives. William’s death at the end, though ridiculous, is played completely straight. His final confession that he just wanted somebody to talk to is heartbreaking. Ennis really does paint him as just a lonely dude who needs a friend.

Caceres’s art, as before, enriches the world with his keen eye for detail. The splash page dedicated to William’s suicide is a stand-out moment in the issue. It’s beautifully rendered in diagonal panels that track his movement downward, lending an air of tragic elegance to the grim scene.

Kieron Gillen and Nahuel Lopez‘s Modded reaches its conclusion (for now?) with the heart and humor we’ve come to expect from the series. This series, in particular, was a highlight for me, and I’m sad to see it go, but Gillen knows how to end a story properly. After an exhausting trek across waste and a life-threatening adventure, Fringe finds herself in the realm of the Rat King. Everyone says that he should be able to identify her flower-generating daemon, Fluffbumble. Instead, we’re left with a classic Don’t Meet Your Heroes situation. Turns out the Rat King is just a weird old dude who can’t identify Fluffbumble at all.

Gillen may have had his attention divided between other projects at the moment, but he gave Modded a fitting send-off in Cinema Purgatorio #18. The meta humor of the series comes full circle, as the Pokémon trainer-esque daemonatrixes face off in battle against a horde of text adventure fanatic pirates. I can’t make this stuff up. Gillen ends on a surprisingly heartwarming note, as Fringe and Fluffbumble decide not to pick sides, a conflict that literally never came up before but whatever, and instead go on their own adventure. While the ending conflict comes out of nowhere, the actual conclusion is too satisfying not to like.

Lopez continues his streak as our favorite character artist in Cinema Purgatorio. The Rat King, specifically, has a delightful design. He’s just a little old dude. His wild beard elongates his face. He wore steampunk goggles and a casual black suit. Everything about him is absolutely delightful. With his intricate staging and attention to character details, Lopez left an incredible impact with his work on Modded.

Act I of A More Perfect Union ends with a dramatic ship battle. The story by Max Brooks and Gabriel Andrade tells an alternate history of the Civil War. An admiral gives a final farewell to his country and family as his ship is overtaken by ants.

While I wasn’t a fan of A More Perfect Union, this issue struck a chord with me. Brooks’ strength in this series has always been with his attention to historical detail. The story almost reads like an ARG, encouraging you to research and figure out bits and pieces on your own. While I still don’t fully understand why there are giant ants in this comic or why I should be rooting for Robert E. Lee to win, I can appreciate other aspects.

It’s like the clever way in which Brooks has the son of the dead admiral delivered the telegram announcing his death. It was then revealed that the boy’s name is Loyall Farragut. With a bit of research, we found out that Loyall is best known for his biography of his father’s heroic life. There are little details like this that we can really appreciate. The dramatic beat the act finishes on is strong, with Loyall saying that he’ll likely meet his father in the afterlife soon enough. I didn’t expect to become invested in this story, but damn Brooks got me hooked in this last issue.

Andrade’s art is the most photorealistic in Cinema Purgatorio, but it never becomes stiff or lifeless. In fact, he keeps things just cartoony enough to make them fun to look at. He’s clearly just as fascinated with history as Brooks is, with his careful attention to the ships and uniforms of the time period.

Cinema Purgatorio #18 closes out with The Vast, a love letter to Kaiju movies. Christos Gage and Gabriel Andrade (again) say farewell for now in a short but punchy issue.

Like in A More Perfect Union, Andrade’s art is obsessively detailed. The juxtaposition of his old-timey uniforms and settings with the sci fi monsters of The Vast is a testament to his range as an artist. The Vast is the most visually legible story in this issue of Cinema Purgatorio thanks to him. His expertly laid spot blacks and defined areas of texture lend something extraordinary to the world. The final page is a highlight of everything we love about his work, with beautiful intricate detailing on the kaiju called Baby contrasting with the relative simplicity of handler Janna’s design.

Gage did himself a disservice by cutting this final action set piece in two. The tension isn’t built properly before it’s completely dispelled by the realization of Baby’s power. However, the final scenes of Janna and Stan are where Gage’s writing shines. The relationship built between these two over the past seventeen issues is touching. They’re clearly close friends, sharing a love of the monsters that threaten their very lives. As Stan gives Janna an opportunity to run, she makes a steadfast declaration of loyalty to Baby. She doesn’t seem to care at all about what her higher-ups have to say. She’s only focused on keeping her Baby safe, making her one of our favorite characters in the whole anthology.