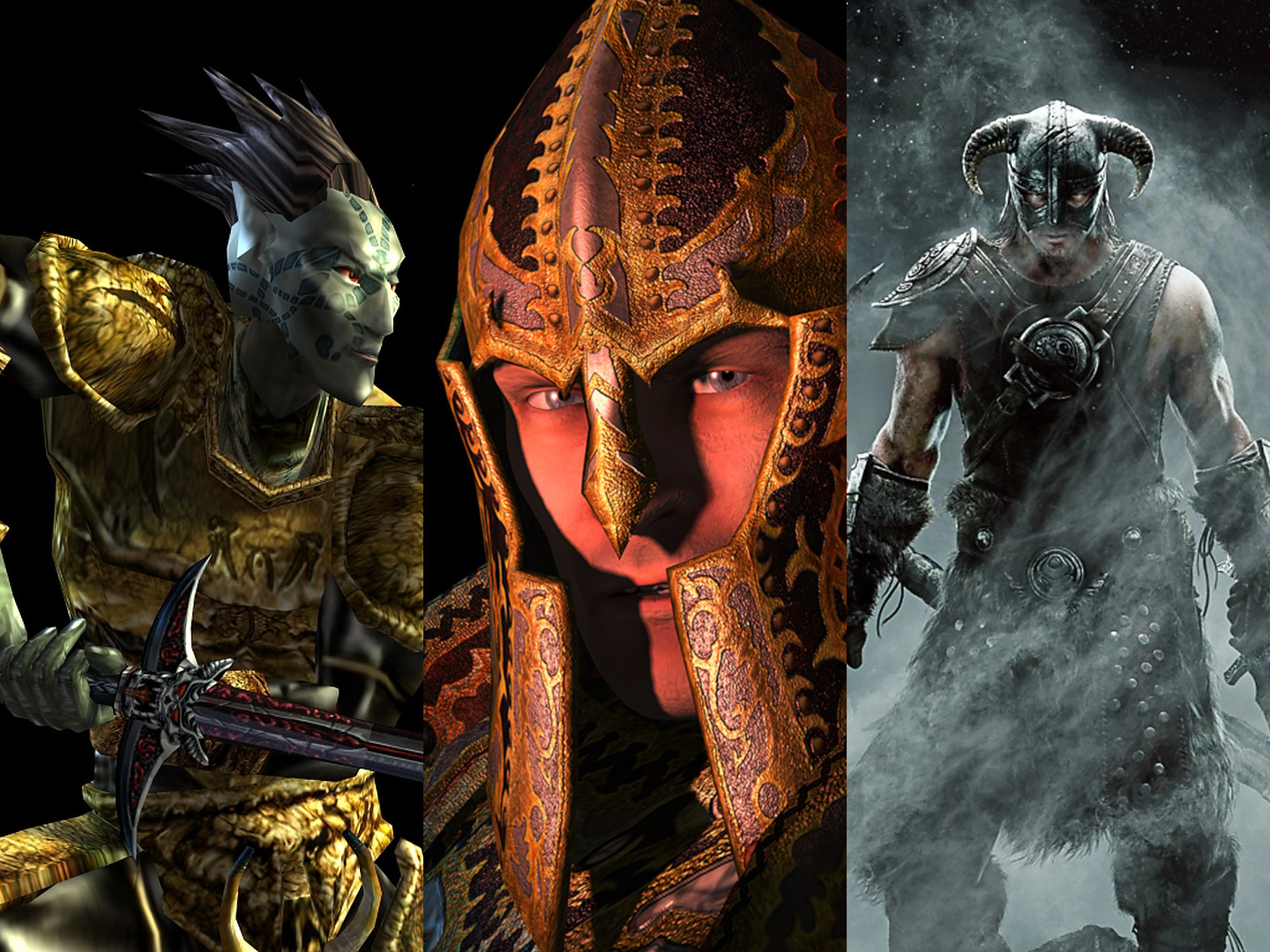 From Nerevarine To Dragonborn: How Elder Scrolls Fans Are Telling Their Own Stories

Outside of the core games, TES now boasts numerous spin-offs. They have a mobile game, a digital TCG, and the aforementioned MMORPG. Bethesda Game Studios has even teased The Elder Scrolls VI at E3 (among other interesting new titles). Though it’s years away from being released. Despite the last main entry, Skyrim, turning eight years old this November. The game still has a large and dedicated player base, as do Oblivion and Morrowind.

Why do people keep coming back? Why am I thinking about buying a second copy of Morrowind, a game that came out in 2002? And, why did I buy Skyrim three times? I have not fallen under a charm spell cast by Todd Howard. I’m just into single-player role-playing, and The Elder Scrolls is by far one of the best franchises for it.

Putting The RP In RPG

The Elder Scrolls is an open-world, action role-playing series that allows players to create their own characters. These player characters are “silent” protagonists as they remain unvoiced. All of their dialogue remains represented through text chosen by the player. One could argue that Elder Scrolls protagonists end up feeling detached from their narratives because of this. I would cite a series like Dragon Age or Baldur’s Gate as better options.

We can get deep into the lore about time and perception of TES. I could talk about how the games’ protagonists are intended to exist as vessels for our real-world influence on Tamriel. Or we could just talk about single-player role-playing and how The Elder Scrolls is the perfect venue for an extremely customizable RPG experience.

Role-playing is a core part of the Elder Scrolls gameplay, but what I’m talking about specifically is in-depth in-character role-playing. You can load up Skyrim, create a character, and play through everything the game has to offer without giving a single thought to the personality or motivations of that said character. The game will never ask you to do so outside of minor variations in dialogue choices. Choices that, in the long run, have little to no effect on your gameplay.

I’ve played the game this way. It’s fun, but it offers very little in terms of replayability. The strength of The Elder Scrolls franchise does not lie in its combat mechanics.

Writing Your Own Elder Scrolls

The reason I’ve kept playing these games since I was given my first copy of Oblivion in 2006 at the tender age of eight is that I love developing characters. In fact, during the five years that I spent playing Oblivion, all I did was role-play the game without realizing it. I was eight. I treated the game world, my character, and all the NPCs in the same way I would treat my action figures. And I made things up. Wherever the game left a blank space, I filled it in.

My character would change clothes to fit the situations he was in. He had a personality that wasn’t my own; he had wants and needs and behaved accordingly. And he slept, ate, and did so many things that were entirely unnecessary in the grand scheme of the game and its mechanics. Oblivion was the first video game I played that I was so wholly immersed in, and it was because it allowed my imagination to run wild. Nine years later, I meticulously updated a document in which I detailed the names and backstories of all of my Elder Scrolls characters.

They exist in a carefully woven tapestry of families and legacies that span the centuries from ESO to Skyrim, and I’m not the only one. Artists dote over their carefully crafted Elder Scrolls characters and share them with the world across social media. Modders throw endless filters over screenshots of their altered creations, decked out in armor you’d never dream of coming across in the base game. I’ve even seen people keep detailed journals for their characters, taking the time to write down the exploits of their character after every play session.

Players embark on great journeys with their characters and walk away with deeper connections to the narrative and characters of the game’s world. Without devoted, role-playing fans, would Oblivion‘s Martin Septim be as adored as he is, coming from a game where all of the NPCs looked like amateur wax figures? Perhaps Sean Bean’s voice acting made everyone fall in love with him, and perhaps some people are just really into smooth, smooth polygons.

By Fans, For Fans

Elder Scrolls fans generally look at the base games as a bare-bones structure for something greater. The fact that people are still modding Morrowind in 2019 is proof of this. Even greater proof comes in the form of massive volunteer modding projects to bring Morrowind and Oblivion into the Skyrim engine in their entirety. Many mods are dedicated to increasing “immersion”. As vague a term as it is, fans want nothing more than to dive as deeply as they can into the world of Tamriel, and they will do it via a thousand graphic enhancement mods.

Mods are made to deepen the role-playing experience as well. My personal favorites are alternate start mods for Skyrim like TwinCrows’ “Realm of Lorkhan,” which allows you to skip the default prisoner intro and choose where you’ll begin your journey. The main quest won’t begin unless you choose to seek it out; if you choose to role-play the game quest by quest as they come, you might not come close to the central narrative for weeks of real-world playtime.

As I said before, you can run through the entirety of Skyrim or any of its predecessors without experiencing any emotional impact from the narratives presented. The secret to drawing an involved, worthwhile experience from an Elder Scrolls game is to get invested right from the beginning—the games give you a blank canvas of a character with no backstory and nothing to their name, so get out a brush and start painting.

Perhaps you’re unfamiliar with the lore? Check out the Unofficial Elder Scrolls Pages! They’ve been collecting information on Elder Scrolls lore and game mechanics since 1995. Pick a race and read its lore article. There are even TES race name generators.

You don’t even need a detailed backstory. Maybe your protagonist was a displaced Dunmer from Vvardenfell, fleeing the eruption of Red Mountain, or maybe they were a simple Breton farmer living in High Rock who decided to travel and ended up in the wrong place at the wrong time. If you’re at a loss, just give your character amnesia and figure it out as you go along. Who they were before won’t matter as much as who they become.

The Elder Scrolls Is A Lore You Become Invested In

The world of Tamriel has centuries of rich lore for you to sink your teeth into. The Elder Scrolls games give you a chance to be part of that lore. Play Morrowind and create your Nerevarine. Become Azura’s chosen, and explore a strange land governed by living gods. Play Oblivion and create your Hero of Kvatch, your Champion of Cyrodiil. Find yourself thrown into the midst of an apocalyptic crisis in a land of infinitely interesting eccentrics. Play Skyrim and create your Dragonborn. Save the world from the dragon threat, put an end to a civil war, and climb every mountain you come across. Or play Elder Scrolls Online and dive into a world with so many different questing opportunities that I can’t easily summarize them all.

If you’ve found yourself staring at your old copy of Skyrim (or any other Elder Scrolls game) and wanting something more from it, pick it back up. Blow the dust off the cover. Start a new game and really think through creating your character this time. Give them some hope and dreams, some ideologies and codes. Instead of piloting them through the game, let your character lead you. Who knows? They might take you somewhere you’ve never been before.