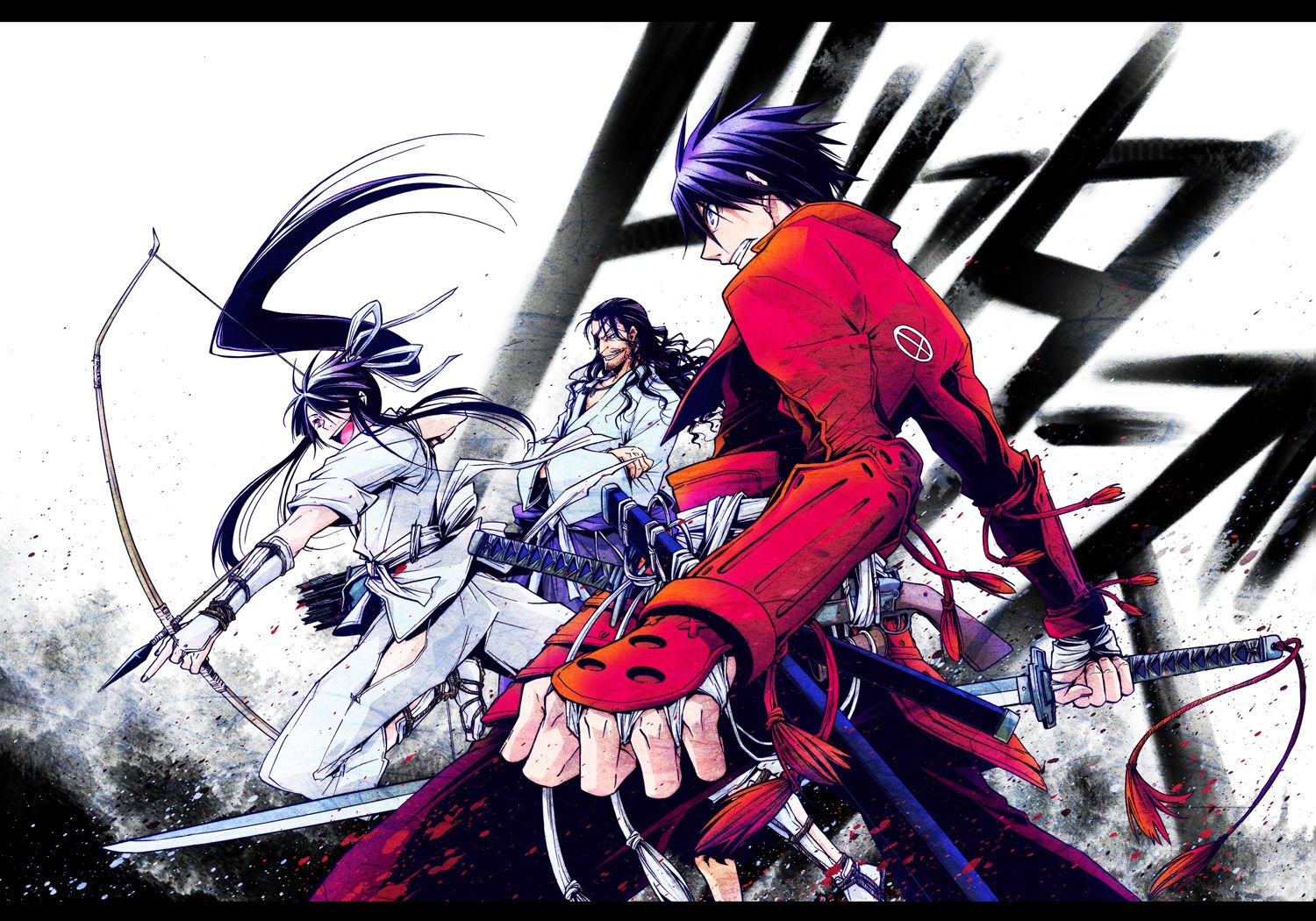 How Does ‘Drifters’ Upend The Fantasy Genre?

Drifters is that gem that comes along every now and again each decade. Written and illustrated by acclaimed mangaka Kouta Hirano; the same man who made the famous Hellsing manga series. Drifters is a triumphant showcase of the potential of high fantasy as a genre. Showcasing a sterling voice cast in the anime and the patented Hirano art style we know and love.

What Is The Plot Of Drifters?

Our protagonist, Shimazu Toyohisa, is transported to another fantastical world after he loses the disastrous battle of Sekigahara. This is where he is then healed and tended to by fellow Drifters, Oda Nobunaga and Nasu No Yoichi, who find him being dragged to an abandoned castle by two young elves. These two young elves just so happened to cause the local knight in charge of their village to scourge that said village. For as it turns out, elves aren’t even allowed to get near or help Drifters after losing a war to the human Orte Empire 50 years ago.

Not to be an ingrate, Toyohisa does the only reasonable thing and utterly destroys the local forces in charge of massacring the elves. Unfortunately, it wasn’t all “destroying the forces of evil for good.” The great spark of rebellion had to be kindled somehow and as it turned out freeing a single elf village was just the start. See, here’s where things get very wild, very fast. Do you know how I mentioned the elves lost a war 50 years ago? Well, it turns out that 50 years ago Adolf Hitler had founded the Orte Empire. No, I’m serious, I wouldn’t have believed it myself. But Hirano-sensei decided to make the Orte Empire a fantasy Third Reich. Though on a side note it seems to be a running theme for Hirano-sensei to make his antagonists Nazis.

Who’s The Cast Of Drifters?

For simplicity’s sake, the three main protagonists as they’re the main focus and driving force of the tale.

Your seemingly run of the mill is hotblooded, but the clueless protagonist. He’s the simplest out of the cast. The man of his time and standing suggests he’s brutally straight forward. The man is simple, to the point of almost being flat; however, he serves as a very pure representative of the ideal of Bushido. And it is thankfully an intriguing look into the samurai mentality of the Sengoku era.

Don’t get me wrong Toyo is entertaining to watch and examine, but his character is like sugar. It’s simple and I enjoy it but there needs to be something supporting him. Fortunately, the other main Drifters make up for his lack of nuance with their own.

The bishounen of the cast is an interesting character study as he’s a fairly comedic character with quite a bit of baggage. As in the early chapters, we get to see Yoichi reminisce over his old commander, a certain Minamoto No Yoshitsune. A dynamo who would send Yoichi on cleanup duty, that’s to say; wipe out routing soldiers with arrows so they couldn’t regroup.

By far the most well fleshed out character of the original protagonists. The Devil King of the 6th Heaven and Uniter of Japan for a time before his untimely betrayal at Honno-Ji. He is just a joy to watch scheming, plotting, and planning. Setting in motion the downfall of the Orte Empire to the upending of the world paradigm itself. There’s room to make the argument that the protagonist really isn’t Toyo but Oda. You could say that Oda’s almost manic obsession with the advent of the musket is perhaps the second strongest driving force in the story.

A Common Theme In The Fantasy Manga

That being “save the world,” we’ve all seen this trope in shows like Rising of the Shield Hero and Kekkon Yubiwa Monogatari. There’s a world that is in danger so the heroes step up to save it and the status quo. Both Drifters and Be Mine Hero I Refuse! introduce gunpowder to a fantasy world.

Both seek to break the powers that be, being the Empire of Orte for the former and the idea of feudalism in the latter. However, Drifters does one thing far different than any of the fantasy manga. Instead of saving a breaking kingdom the Drifters want to conquer it. Oda Nobunaga, ever the fountain of knowledge of feudal politics, clearly and concisely points out the almost petty mindset of a feudal lord.

Now that we’ve covered some background on why the Drifters decided to take over the Orte Empire, let’s have a look at why it defies the norm. As stated earlier, in other fantasy stories there is an imperative to save the status quo of the world. In fantasy manga like Kekkon Yubiwa Monogatari, the protagonist sets out on a quest to save the world or kingdom and whether knowingly or unknowingly save the status quo. Meanwhile, Drifters thankfully dismantles the status quo.

The War Is Present In Drifters

As Oda Nobunaga elaborates in “Chapter 14” of the manga:

“The battle itself is a consequence of what you did before.”

We’ve seen many times in not just this genre but storytelling, in general, “the power of friendship” prevailing over the odds. Not here in this tale of tactics and strategy, everything boils down to how the cast played out the battle beforehand. Fantasy may delve into the mythical, but here Drifters showcases its grounding in the application of tactics. And yet it’s filled with elves, dwarves and other mythical monsters, so the question is: Why do Drifters feel so realistic?

Whether it’s Oda running tactical circles around the Orte Empire, Ends or even his fellow Drifters, Oda serves as this emissary and a reminder that good tactical sense should and ought to be showcased in high fantasy. There is a pattern found in fantasy battles that can be traced back to the granddaddy of the genre, The Lord of the Rings where a defending army is saved from disaster by reinforcements. Most notably, and most often, the cavalry. The battle of Helms Deep and the siege of Minas Tirith showcase what’s called a eucatastrophe.

Whereby a seemingly hopeless situation is remedied by a sudden flood of extra manpower seemingly out of nowhere. Though thankfully unexpected reinforcements aren’t found in Drifters as there aren’t any scenes where the protagonists are saved by the cavalry after “Chapter 11.” Well, thankfully not until “Chapter 75” that is.

Drifters Is A Gem

Drifters with its unique premise, sterling voice acting in the anime and thrilling action in both adaptations explores and expands upon the fantasy anime genre in ways we haven’t seen before. From inverting the way that fantasy is portrayed on its head to its incredible art style, Drifters serves as a shining example of how a genre can be enriched and examined. Drifters currently has just one season, an OVA and a pair of specials.