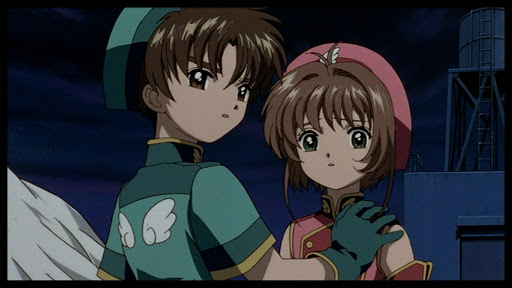 The general idea of a soulmate is someone you will be with and find your destiny no matter what. The chemistry is instant and through the sheer power of fate, nobody can escape it. This idea usually sounds like a simulation, because no relationship develops from the power of a stone tablet. For instance, in the television series Legends of Tomorrow, the characters Kendra Saunders and Carter Hall were reincarnations of lovers from ancient Egypt.

Despite this fact, the two did not get along well in the present timeline of the show and the relationship was tense. The label meant nothing at that point because they had become different people. Which begs the question, ‘Is fate really that involved in who we must be with?’ This is one of the themes of CLAMP’s Cardcaptor Sakura. It involves a particular love drama between four characters, very much a ‘she loves him, but he loves him’ type deal. It all comes about through the work of a magician named Clow Reed. His actions set the story for the anime many years before it began, all of which had the best intentions.

Everyone Has The Power Of Choice

Clow Reed doesn’t count on the power of free will here. See, he used magic to make two guardian creatures, Yue and Kerberos, the former of whom he was especially close to. Knowing he was by no means immortal, the magician set things so that Yue would eventually have someone else to love.

However, by the time Cardcaptor Sakura begins, Yue is in hiding through an alter ego human form, Yukito. This is because without magic to sustain him, Yue’s true form can’t awaken so instead he sleeps as a spirit in Yukito’s body. Yukito has no idea of Yue’s existence within him while he lives as a normal high school student. He’s close to fellow student Touya Kinomoto and it is hinted many times they are in love with one another. In turn, Sakura, the girl that Clow Reed originally intended to be Yue’s love, falls for Reed’s descendant, Syaoran Li. This shows that soulmates can be formed through chemistry rather than fate.

Cardcaptor Sakura Is A Coming Of Age Tale

What is destined to happen, however, is Sakura finding Clow Reed’s book of magic cards. The main plot of Cardcaptor Sakura focuses on Sakura’s development as a magus. Unfortunately, when the book is opened, all of the cards fly away. This kicks off the premise of the first arc, where Sakura must get every card back. Without a master to manage them, the cards cause havoc all over her hometown of Tomoeda. Typically the storyline is about how Sakura collects cards that interrupt her daily life, like in episode three, Sakura’s Heart-Racing First Date. Here, the water card threatens a local aquarium she’s visiting.

Later on, Sakura has many adventures collecting the cards as a team with Syaoran. This leads to the Little Manhattan-Esque side story that follows Syaoran experiencing his first love. Syaoran’s feelings towards Sakura draws him in because he is curious about her and cannot explain why. When Sakura becomes the new master of the cards, Syaoran is not resentful about it. Instead, he shows a new level of maturity by being happy for his friend even if it meant failing his goal.

Syaoran Discovers What Love Is

Syaoran’s maturity progresses as the series follows in its sequel, Clear Card. As children have natural selfishness to them; Syaoran’s dedication shows that he is emotionally transitioning from a boy to a man. He realized that being in a relationship means going the extra mile to put the person you care about before yourself sometimes. Through growing up to care for Sakura, Syaoran is making an active choice to be with someone he has a pleasant relationship with.

By being good friends first, they established a foundation of trust and reliability. This shows when he comforts her after Yukito rejects her feelings. Even though there’s a great possibility his feelings could be mutual, Syaoran is willing to be there for her regardless. He knows things may not turn out how he wants, but he adores Sakura. So much that he will accept anything she chooses because he loves her enough to ensure her happiness. Together, they show that soulmates are not born from fate, but from the work and time that goes into developing a relationship.

Sakura And Syaoran Learn From Each Other

Selflessness can come in many different shapes and it shows the importance of taking care of each other. This is the general foundation for the relationship behind Syaoran and Sakura. Syaoran comes from a strict authoritarian family that has raised him to have only one job and that is to be the successor of his ancestor, Clow Reed. He comes off as rude, doing everything he can to compete with Sakura to get the Clow cards.

Eventually, we see that he is not such a heartless kid, but he is simply fulfilling his duty. Sakura, on the other hand, has lived a fairly relaxed sort of lifestyle in her little sleepy town of Tomoeda. Her town is a clear example of a closely-knit suburban trope, however, this setting explains why Sakura is so open to inviting Syaoran into her circle despite his animosity. It’s also her subtle way of showing him that she’s not trying to collect the Clow cards as a way of competition.

Meanwhile, Sakura learns patience from Syaoran, because up until meeting him, she hardly had any negative experiences with other people. Part of growing up is understanding that you may not get along with everyone, and they may not like you, and that is perfectly fine. She is willing to accept this about him, but as they bond she can see there is a lot beneath his rigid personality. This is another thing he teaches her, that people are never as simple as they seem.

Their Animosity Brings Them Together

The fact that Sakura falls into the world of magic and Syaoran is raised in it sets everything in place. It creates fascinating chemistry that leads to their friendship. This is shown when they start to team up to catch the cards. Despite their initial end goals being different, they want the same thing. This forces them to learn how to get along and work together.

In turn, this creates a bond between them. Through those adventures it allows Syaoran to realize that there is a world out he wants to experience. It’s an epiphany that he associates all with Sakura and for that, how can he do anything but fall in love with her?

Cardcaptor Sakura Is A Love Story

One of the most symbolic arcs of the series follows Sakura and Syaoran participating in a tradition of making a teddy bear exchange with a person you care about. She makes one for Syaoran, after he gives her one and in a touching scene which rushes to send him off with the bear before he leaves Japan.

It’s obvious they care a great deal for one another. But until they can develop the emotional maturity to one day pursue an intimate relationship, things will be dormant. This romance is quietly symbolized in the form of the bear exchange, creating something tangible and familiar out of confusing feelings. However, he’s still only an upper elementary school boy at that point so he’s not ready to understand his feelings.

One of the things that’s appealing about Cardcaptor Sakura, is how it disregards gender conformity by proudly practicing travesti (when a role in a show that’s traditionally a specific gender is given to someone of the opposite gender). This begins with the high school in town putting on a production of Cinderella. Here, Sakura’s brother Touya takes the title role.

Later on, Sakura’s school does a version of Sleeping Beauty. Her take on the part of the Prince is symbolic because she saved Syaoran from his oppressive life. By opening him up to new things, she inspired an awakening within the boy.

They Figure Things Out Together

The sequel series Clear Card features the duo as first-year middle schoolers. Here we see them building the foundations of a relationship through the power of trial and error. They’ve expressed their feelings for one another, but going about it will be a challenge for both. As neither have any experience of being in a relationship. They aren’t quite sure how to act, what to do at first, or how they’ll learn to maintain it. Despite this, Sakura and Syaoran are soulmates and they are happy together. However, it doesn’t mean things are going to be cupcakes and sunshine if they can’t appease the other.

For example, Sakura tells him that she wants to make him lunch. It seems so simple, but the skills to make a meal represent a universal part of self sufficiency. At this point, Syaoran is living on his own and taking care of himself. It’s not new for him at all, since his family raised him to be independent. Sakura, however, grew up under a single father in a family dynamic that was very different.

Her family shared household chores to take some of the workload away from their dad. By demonstrating her ability to cook, she wants to show Syaoran that they can build a family harmony together. As it would be one that combines both household dynamics. Despite that it was unplanned, Sakura and Syaoran ended up together through progressive bonding and natural chemistry. Love develops naturally, and these factors combined are what make them soulmates.