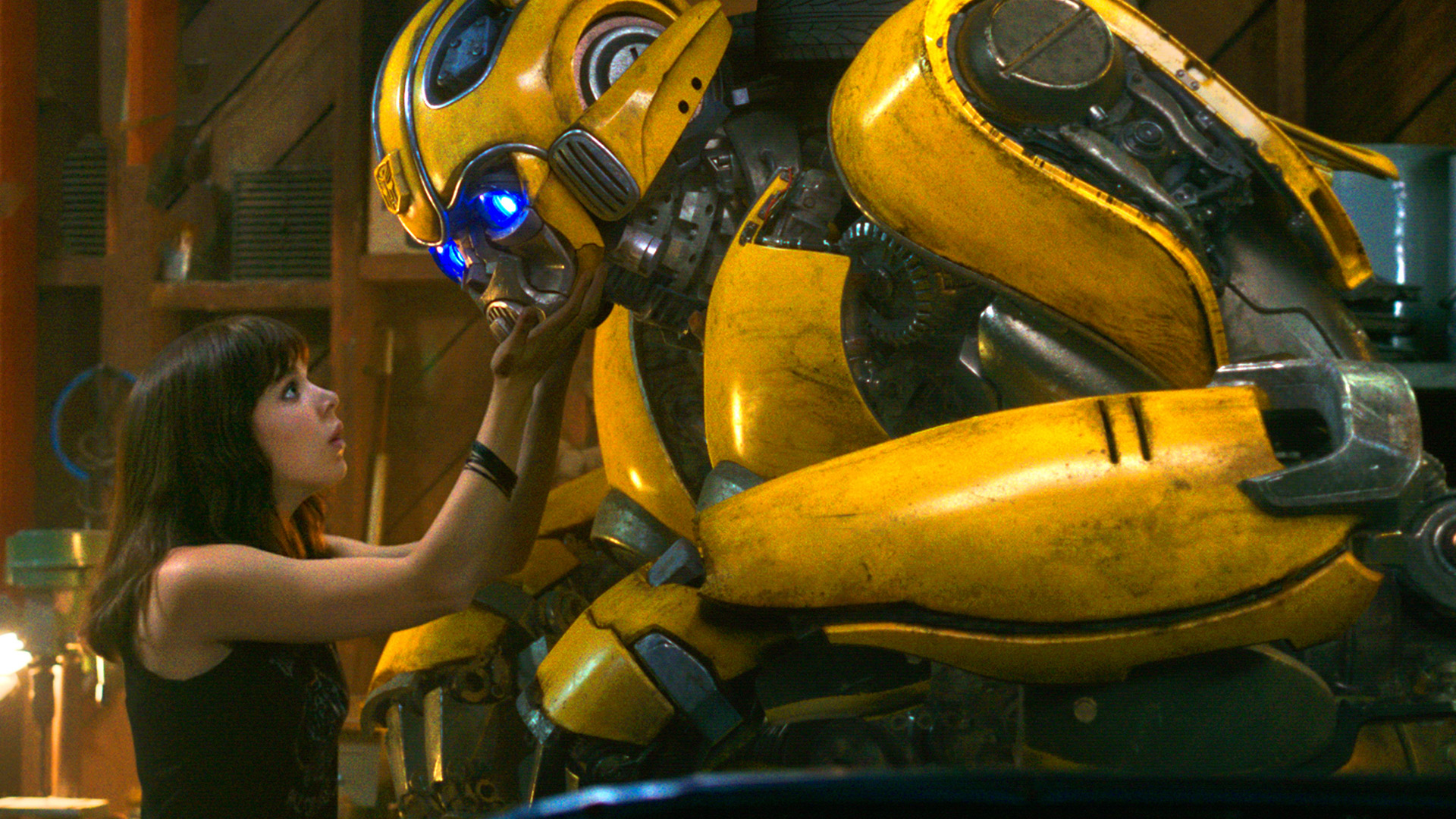 If you ask any Transformers fan who their favorite character is, chances are the response won’t be a human character. Human characters are accessories, and certainly don’t get the fan adoration many of the Cybertronian characters do. When going into a series that features a civil war fought by robot aliens, humans may not be the first thing on the viewer’s mind.  As such, humans run the risk of appearing tacked on to a Transformers series.

From the moment The Transformers were more than just toys, they shared the spotlight with human characters. Like them or loathe them, humans are part of one of the main Transformers formulas: the Autobots making contact with humans and befriending them, and how that relationship impacts the Cybertronians’ time on Earth. Often this leads to a plot imbalance. Human characters tend to take attention away from the Autobot-Decepticon conflict. However, by exploring the relationship between Bee and his human companion, 2018’s Bumblebee fixes this age-old problem.

Why Are There Humans In The Transformers?

Between the original comics and cartoon, The Transformers involves many human encounters. The Transformers often centers around alien refugees on an unfamiliar planet. This is where humans come in. Humans are there to remind the viewer how large the Transformers are, as well as give purpose to their transformation into vehicles.

They also make up the foreign world that the alien characters interact with. Above all, humans are a means of understanding the Autobots and Decepticons from an outsider point of view. Human characters act as the audience’s preference.

Despite having a plot purpose, humans in The Transformers are often the bane of viewers. Human characters often get into avoidable danger that hinders battle scenes. Much of the fan disdain for human characters also comes from their bland personalities and tendency to draw attention away from the main conflict.

Bumblebee takes the classic route of The Transformers by having aliens going to earth to escape war, and while on earth, befriending a human. However, the human protagonist, Charlie, subverts a lot of human-related issues. We will cover how and why in just a bit. First, let’s look at two of her predecessors: Spike from Generation One and Bayverse’s Sam.

Spike Witwicky: The Beginning Of The Human Problem

The first generation (G1)’s primary human companion is Spike Witwicky, a very bland and basic teenager. Spike and his father Sparkplug encounter the Autobots, befriend them, and teach them about Earth. In return, Spike gets to go on adventures with the Autobots. Spike is obviously a stand-in for the viewer and a bit of a blank canvas. By being a relatively normal teen that gets to befriend Autobots, Spike is a character for the audience to relate to and potentially see themselves in.

While some like the G1 humans, it’s easy to see why they aren’t everyone’s favorites. Let’s face it, nobody was tuning into The Transformers to see what Spike Witwicky and his cool dad were up to.  There are a few episodes where humans have some pay off in the plot, such as their knowledge of Earth or their immunity to Cybertronian death sentences like acid rain. Otherwise, G1 started a problematic trend in The Transformers: the tendency to give way too much screen time to the most ordinary part of the story.

From Spike onward, humans have generally remained as stand-ins to showcase the Cybertronians’ alienness. Though, some humans have larger plot importance than others. Compare Sari from Transformers Animated — whose arc is a central focus of the show — to the human kids of Transformers Prime, who are tacked on like Spike. Regardless, even with characters who are central to the series, the humans are always a tier below the robots.

Despite his blandness, G1’s Spike serves the purpose that most human characters do in extraordinary stories like The Transformers: he is the everyman viewers can relate to. Most human characters take after Spike in that they genuinely want to be part of this greater story. This is where the confusion for Sam Witwicky comes in. Sam, the protagonist, doesn’t seem to want to be in The Transformers at all.

In the first three Micheal Bay-directed movies, Sam (Shia Labeouf) holds the plot key that brings The Transformers’ conflict to him. However, Sam has little interest in that conflict and therefore has very little to offer the plot. He desires to be a regular college kid and is agitated that he’s even involved with the Autobots. The movies waste a lot of time on Sam’s relationships with other humans, and The Transformers are left in the background. Because of all this, Sam is probably one of the most unlikeable human characters, and one of the strongest examples of their harm to The Transformers.

Bay-Verse Really Didn’t Know What To Do With Humans

With little to no relationship with Bee to speak of, Sam embodies all of the issues with human companions. His presence takes away from The Transformers‘s plot, and his unlikeable personality is distracting. Often, Sam seems bothered by Bumblebee and treats him like an object rather than a friend. The extraordinary fall into Sam’s lap over and over until the excitement of The Transformers becomes a burden on him, and by extension, the audience that he stands in for.

Bumblebee features two parallel plotlines: The Decepticons searching for Bumblebee, and Bumblebee’s relationship with Charlie. Both of these plots are of equal importance in the film, so when the climax brings the two storylines together, one does not overshadow the other. Instead of trying to force the human character into the action, the movie builds the relationship that will be put on the line.

How Charlie’s Free Will Benefits Bumblebee

Unlike Sam, Charlie is not a “chosen one.” She doesn’t know the world is at stake, and she doesn’t need to be convinced to help Bumblebee. Therefore, when the danger does arise, Charlie has an established emotional relationship with Bumblebee. For Charlie, the alien conflict becomes a personal battle, and she willingly puts herself into the action. By having her relationship with Bumblebee be the main focus of the movie, the plot organically integrates her presence during the climactic battle with her having a personal stake: Bumblebee.

The movie builds a plot around what Bee and Charlie have in common, as well as what they can teach one another. Her troubled life is brightened by Bee, which leads to many light-hearted moments bonding with him. This feel-good relationship is great for relatability (who wouldn’t want to hang out with a friendly alien car?) but it also adds to the plot. Outside of the movie’s main conflict, Bee and Charlie have their own storyline and arc. Both characters are struggling to find themselves while feeling unheard.

For example, while fixing up Bumblebee, Charlie accidentally unlocks a message from Optimus Prime. This scene is followed by Bumblebee accidentally “unlocking” a message from Charlie’s late father by playing a home movie. Both of these events unsettle the characters. These fatherly figures remind Charlie and Bee of their past selves and what has been lost.  Bumblebee sustains damage upon coming to earth, which has left him without his voice or a way back to his home planet. Charlie hasn’t been able to move past the death of her father. She is frustrated at the emotional distance within her family and is uncertain about her own identity. Both characters are displaced and unable to communicate in a state of trauma.

Charlie is a throwback to G1’s Spike and his relationship with the Autobots. However, she is crucial to the plot, not a detraction from it. She is the only human who strove to get to know Bumblebee as a person. Her wanting to communicate with him leads to Bee getting his voice back. Instead of trying to force Charlie into the war, the movie gave her a better-suited purpose. Because of Charlie, Bumblebee literally and symbolically got his voice back.

Has Bumblebee Set A New Standard For Human Characters?

Humans have long been the bane of many Transformers fans. But at long last, Bumblebee has reworked the purpose and place of human characters for the better. Bumblebee proves that humans can be used effectively without taking away from the story.

The human element works in Bumblebee because the film values the bond between Charlie and Bee just as much as the action. By giving Charlie this plot purpose that links with Bee’s arc, her character is cohesive with the world of Transformers. Hopefully, moving forward in the live-action world of The Transformers, the presence of human characters will continue down Charlie’s path.