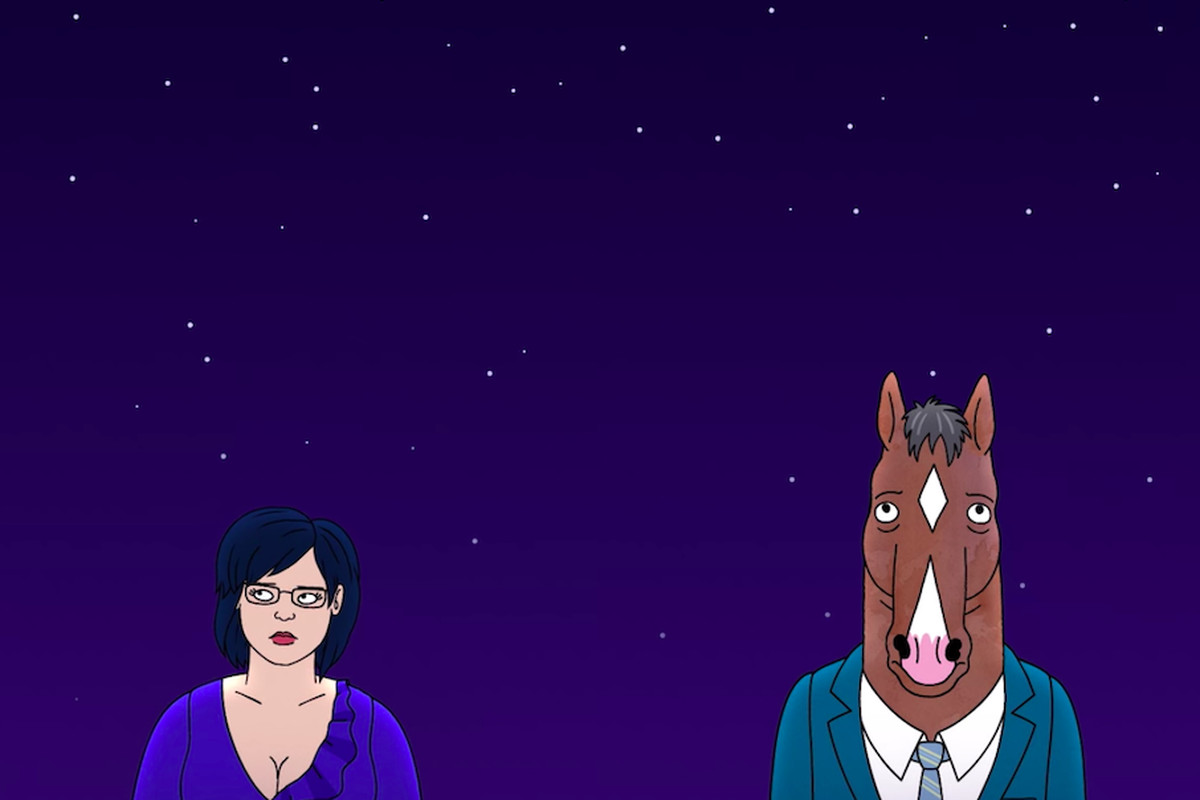 How BoJack Horseman Makes The Most Of Its Medium

Once in a while, there is a show that synchronizes it’s script and visuals so well that it brings storytelling to a new level. Raphael Bob-Waksberg’s BoJack Horseman demonstrates the significance that the relationship between words and visuals has on a story. BoJack Horseman fully makes use of its medium to depict the intense story that we have enjoyed for six seasons.  Now that the emotional roller coaster of a series is over, let’s take a brief look at the art of BoJack Horseman and how much effect it had on the storytelling.  If you are not caught up on BoJack, fair warning, this article contains spoilers from the final season.

The Art & Design That Made BoJack Horseman So Iconic

BoJack Horseman‘s writing digs into a world of flawed but relatable characters, but the first thing to notice about BoJack is its art. BoJack‘s aesthetics come from the bizarrely brilliant mind of artist Lisa Hanawalt. With a mix of humans and human/animal hybrids, the art allows for visual gags and parodies of real-world counterparts. The artwork is just surreal enough to allow for experimentation with telling very “real” stories.

Bojack has a beautiful pallet with a wide array of colors. Despite the darker subject matter, the show is often quite bright. Thus, the visually darker moments are all the more jarring. Even further, the show shies away from solid black, so when it is used it really stands out. Only a few things are thematically pitch black, including BoJack‘s mane and a reoccurring theme of tar. Little details add to the aesthetic world but also flesh out the characters and storytelling. With its bold use of colors and silhouette, BoJack claims a style that captures its complex story.

BoJack Horseman‘s Backgrounds Are Their Own Characters

While some cartoons simplify backgrounds, BoJack Horseman takes advantage of the canvas space. Much of the plot depends on location, on and off of a set, and the show takes time to flesh out backgrounds. Sometimes the show depicts real-life places, other times we get underwater metropolises. Whichever way, BoJack’s backgrounds communicate comfort or displacement depending on the episode. Diane feeling like a displaced tourist in Vietnam (“The Dog Days Are Over”) is a culmination of writing and masterful setting design. Even different eras, background gags aside, come across with painstaking detail to the world around the characters.

BoJack Horseman’s layouts can sometimes border on Expressionist in that there are moments where the depiction of surroundings are skewed in a way to reflect emotional states of characters.  This is particularly true in “bender” episodes or episodes with intense emotional focus.  And when not distorted, locations often embody a character’s state such as the lake house’s decrepit state reflecting BoJack‘s distress all throughout “The Old Sugmarman House.” The storytelling in BoJack’s settings demonstrates the effect that backgrounds can have on a story, especially when thought out as carefully as the characters are.

The Stage For BoJack; Hollywoo

A small but authentic detail about BoJack Horseman is how the backgrounds manage to capture Los Angeles.  Though comedically exaggerated, there are numerous “bumping the lamp” level details of accurately depicting the different locations around L.A. From Beverly Hills’ light posts to the city’s endless streets, Los Angeles is eerily recognizable in its cartoon form. Even the sky’s color, blue and purple due to the show’s trademark lack of solid black, is a light sort of shade perfect for Hollywood (or Hollywoo.)  As is the case with any big city, Los Angeles natives can attest to the light pollution making the city rather bright, even in the dead of night.

In every aspect of the show, BoJack Horseman pushes the boundaries as soon as the viewer makes the mistake of getting comfortable. True for the show’s writing, this is also true for the animation. BoJack plays with different animation styles, strategically used to depict the inner mental workings of characters.

When going into the minds of characters, the animation at times will completely shift in style. Not only does this reflect on the self-image of the characters, but the animation also captures relatable feelings. BoJack‘s self-loathing and overstimulation are conveyed by illustrating his intrusive thoughts. The animation, in turn, becomes distorted and overwhelming in its pacing.

Similarly, Diane’s frustration with writing is visualized by violent scribbles that echo the self-questioning anguish of creating. The illustration of heavy subjects like depression takes the viewer out of the comfort of BoJack’s usual style. Artwork and animation add an internal layer to the characters on-screen. Paired with the show’s top-notch voice performances and soundtrack, the effect is jarring in the way that serves the story.

Typically, the second to last episode of the season is where BoJack Horseman‘s art and animation soar. Often some sort of real-world or internal climax, the penultimate episodes usually depict an irreversible shift in the show. Ultimately, the episodes combine external and internal climaxes. Drug bender episodes take advantage of BoJack’s intoxication to disorient the viewer and introduce surreal visuals. “Time’s Arrow” pushes the previous boundaries by depicting dementia visually while Beatrice reflects on her traumatic life. While BoJack Horseman follows a fairly linear storyline, each season has a particular theme or focus on BoJack’s life. The penultimate episodes bring that to a head, being the emotional climax in both writing and animation.

Most recently, “The View From Halfway Down” was perhaps one of the more Expressionist and almost Gothic penultimate episodes. The episode being both a dream and a state of purgatory allows for the art to build a new emotional and visual tone that was still characteristically BoJack. Packed with symbolic throwbacks for the entire series, “The View From Halfway Down” has backgrounds and visuals reflect the emotional states of the characters and their deaths. Additionally, the penultimate episodes involve visual symbolism that leaves a lot for the audience to interpret. The show uses nearly every aspect of visual communication (color, lighting, placement, etc) to bring these episodes to a level that only animation could truly capture.

With BoJack Horseman’s cultural impact, one can hope that adult animation takes a shift towards more mature subjects and creative artwork. BoJack’s scripts deserve all of the received praise, but it’s the relationship between words and art that makes BoJack so effective. The art has carried these deep, often dark, messages to portray a very vulnerable, human story.

With so much thought put into the visuals, BoJack needs more than one viewing to pick up on everything.  All the more reason to rewatch BoJack Horseman one more time and appreciate the relationship between written and visual storytelling.