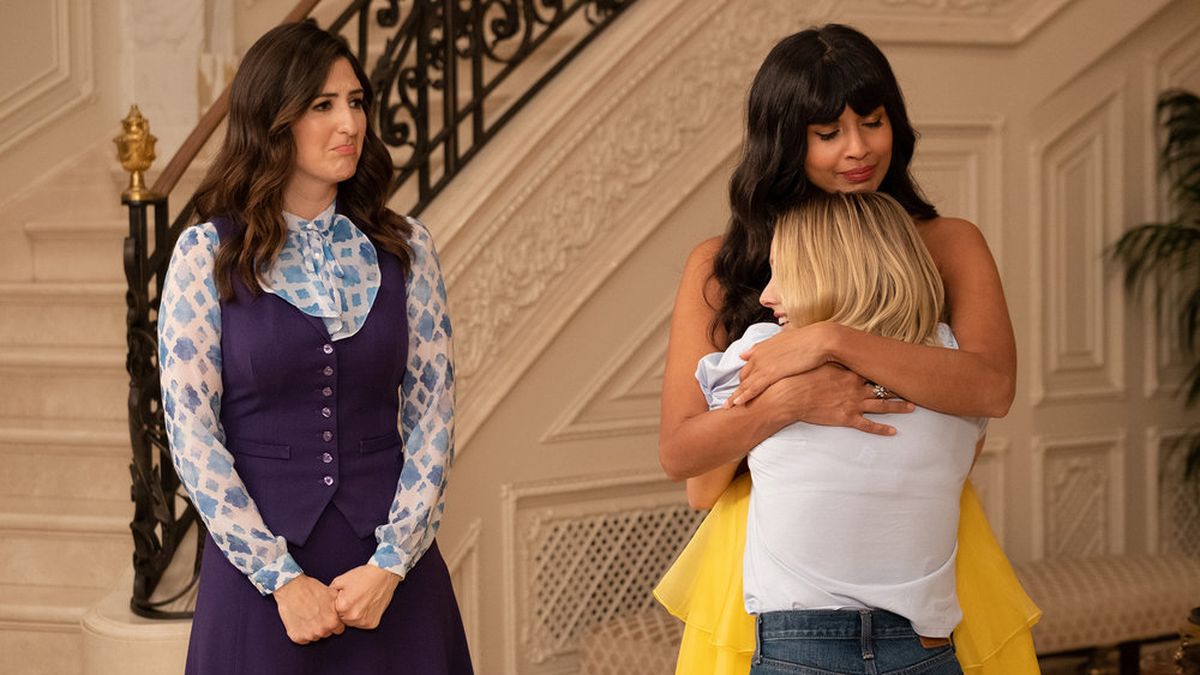 Here’s Why The Good Place Is Forking Amazing

If you’ve been living under a rock for the last four years, you probably haven’t had the chance to take in the overall amazingness that is The Good Place. Divided into four seasons and 62 chapters, this serialized comedy took the world by absolute storm with its first season. However, it didn’t stop there. Over the last four years, we’ve all been left with one question: “How could they possibly end this?” Each season finale brought a new twist or a new concept, but how could they keep that going? Would every twist be as exciting as the last? Turns out, not so much.

A Quick Recap Of The Good Place

If for some reason you aren’t a fan of The Good Place, here’s a quick and dirty recap of what’s happened over the past four seasons. Buckle your forking seatbelts, we’re heading down Good Place memory lane.

Season One: “This Is The Bad Place!”

Oh, season one. The introduction to our favorite characters and the story the show would take them on. Season one brought the four humans, Eleanor Shellstrop (Kristen Bell), Chidi Anagonye (William Jackson Harper), Jason Mendoza (Manny Jacinto), and Tahani Al-Jamil (Jameela Jamil) to The Good Place. Or, so they thought. Eleanor quickly realizes that everyone around her is a much better person than she is. She confides in her soulmate Chidi, telling him that she truly doesn’t belong there. She ropes him into helping her become a better person.

Later, they find out Jason also doesn’t belong there, and they force him to learn philosophy and ethics as well. Along the way, there was a lot of drama and a lot of people falling in love with each other. We’re also introduced to “real Eleanor” and Sean, the fake Judge (and a real demon). The end of the season features a lot of debate, in which the four humans have to decide which two of them deserve to go to the bad place. It’s at that moment that Eleanor comes to a conclusion, they’re in the bad place.

At the end of season one, we thought that nothing could get better than the quality television we had just watched 13 episodes of. And then season two came out, and somehow it was better. The humans, with freshly reset memories, ran through the same scenario over and over again, each time figuring it out, even Jason managed to figure out the whole scheme in one of the run-throughs. After 800 resets, Vicki took over out of fear that Michael (Ted Danson) was going to screw it up again. That’s right about when Michael panics and realizes that he needs to enlist the help of the humans, and thus, Team Cockroach is born.

Michael eventually grows conscious, grows attached to Janet (D’Arcy Carden), and helps the humans escape from the fake bad place. Except he has a secret, he has no idea how to get the humans into the good place. The six of them sneak through the bad place to find a portal to an all-knowing judge, Gen (Maya Rudolph) who could hear their case and get them into the good place.

Except, she doesn’t really believe they deserve to go to the good place, for real. She and Michael come to an agreement, and the four humans get sent back to earth right before their deaths to right their wrongs. If I had to choose, season two might have been my favorite out of the four. It showed us a more in-depth view of the humans and we got to see Michael’s sentimental side. Closely followed by season three, season two makes its mark as near-perfect television.

Season Three: “I Will Literally See You In Hell”

In season three, the humans are back on earth. There’s a lot of exposition showing each human in their new lives. Basically, they’ve all gotten better and then reverted into their selfish, nervous, stuck-up, and generally dumb (Jason, looking at you) personas. Michael, desperate to get these humans into the good place, takes them to Earth and intervenes in their lives. He brings them all together to learn ethics from Chidi once more. After a lot of human stuff, even an intervention from the demons themselves, the humans realize that they’ve been dead before. They then form a soul squad and decide to go on a healing rampage, helping their loved ones back on earth get into the good place upon their deaths.

When even that doesn’t get them into the good place, they make a new plan. They restart the first scenario, faking the good place with four new humans. The demons get to choose the humans, though. When one of the four humans they choose ends up being a demon, a compromise is made. Chidi steps in to fill their place, effectively having his memory wiped, removing all memories of his friends and his love for Eleanor.

Overall, season four is not the best. It follows a new cast of characters involved in the new good place. Eleanor takes over as the architect when Michael literally freaks out, and they have to figure out how to make their terrible new humans better. It’s kind of a rocky road from there. The new humans are downright terrible, more so than the original four were when they started out. Brent is a totally old white dude, thinking he’s entitled to pretty much anything. He also thinks he deserves to be in “Super Heaven.”

There’s also an old gossipy journalist, Simone, from season three (who was briefly in love with Chidi). When the test inevitably fails, they’re required to think of a new system for the afterlife. They come up with the idea of a test. Each person will take their own person test. When they pass, they’ll be admitted into the good place. If they fail, they’ll be forced to take the test over and over again, which seems like its own bad place kind of hell.

When the humans get to the good place (actually and really) they realize that it’s not all they wanted it to be. Everyone who’s there is kind of a mush-person. Their brains have stopped working and they’re basically boring and useless. That’s when Eleanor decides it’s a good idea to introduce the concept of death into the good place. When someone decides they’re satisfied with their afterlife, they can walk through the door and cease to exist. The series finale follows the four humans and their decision to leave the afterlife for good. It’s heartwarming and beautiful to watch. It saves the kind of just-alright season with its sappiness and overall wonder.

If The Good Place does one thing right, it’s characters. I mean, it does a lot of things right, but characters are definitely its strong suit. Not only is the show racially diverse, but diverse in personality and character. None of the characters are similar; they all stand out in their own way. Eleanor is a trash can from Arizona with a selfish past, Chidi can’t make a decision to save his life, Jason is straight-up just like… really dumb, and Tahani is a stuck-up socialite.

They all get their own individual character arcs that are very well laid out on the screen. Not only are the characters great but their relationships are golden as well. They’re all healthy, no one is ever trying to sabotage the other one, and everyone truly cares about each other. It’s wholesome to watch them continuously stand up for one another.

The Realism Behind Comedy

Most comedy stems from real events, stand-up comedians write their content based on stories from their own lives, and comedy shows are no different. The Good Place pulls heavily from reality. The whole structure of the story is based on being a good person, which is clearly something that people are still struggling with within this day and age. What We Owe to Each Other by T.M. Scanlon drives the majority of the storytelling in The Good Place. It focuses on the subject of ethics, and how we judge what’s right and what’s wrong. They speak about this a lot in the show, especially when changing the system for good vs. bad. The show also focuses on forgiveness, and which actions are forgive-able over others.

For example, eating a tomato causes you to gain negative points. Clearly this should be a forgive-able action, but the system doesn’t see it that way. The humans struggle with the idea that eating a tomato isn’t inherently evil or bad, so why are they being placed in the bad place for this action? They also deal with other things, Brent in particular, who is racist and sexist, amongst many other things. In the finale, we see that he’s still taking his test to get into the good place, so many bearimy’s later. There are still people who are bad, but love and compassion can help those who just need a push in the right direction.

A Commentary On Mental Health

Philosophy and virtue ethics are very clearly talked about in the show. To a point that’s got me saying, “This is why everyone hates philosophy professors.” But what isn’t spoken about as much is its commentary on mental health issues. The Good Place‘s final season showcases the fact that people go through hard times.

There are hard moments in life, but if you’re alone and suffocating, you may never come out of that darkness. The four humans proved that love and care can make some of the worst, trash can people, better. The Good Place tells us that sometimes you just need a little push, sometimes you just need someone to care, and that’s okay.

The Good Place: Will There Ever Be Anything Like It?

The really interesting thing about The Good Place, is that you can pick up on any of the seasons (except maybe season four) and easily understand what’s going on. The Good Place isn’t your typical comedy. It’s not like Parks and Rec or How I Met Your Mother. Those shows are episodic, meaning you can watch episodes out of order and things make sense. This isn’t really an overarching story. With The Good Place, there’s very clearly an overarching story, making it a serialized comedy. Serialized comedies aren’t as popular on TV these days, and The Good Place is arguably one of the best, most ground-breaking ones.

If you’re going to binge any show from the 2010s, definitely start with this one. It will not only make you laugh your ash off, but it will make you cry just as much. It touched my heart in a way that I never thought a show could, and it will be with me for the rest of my life. This isn’t another show that has been able to capture the essence of good character and good storytelling like this for a long time. If you still haven’t seen The Good Place, you really need to get on that.