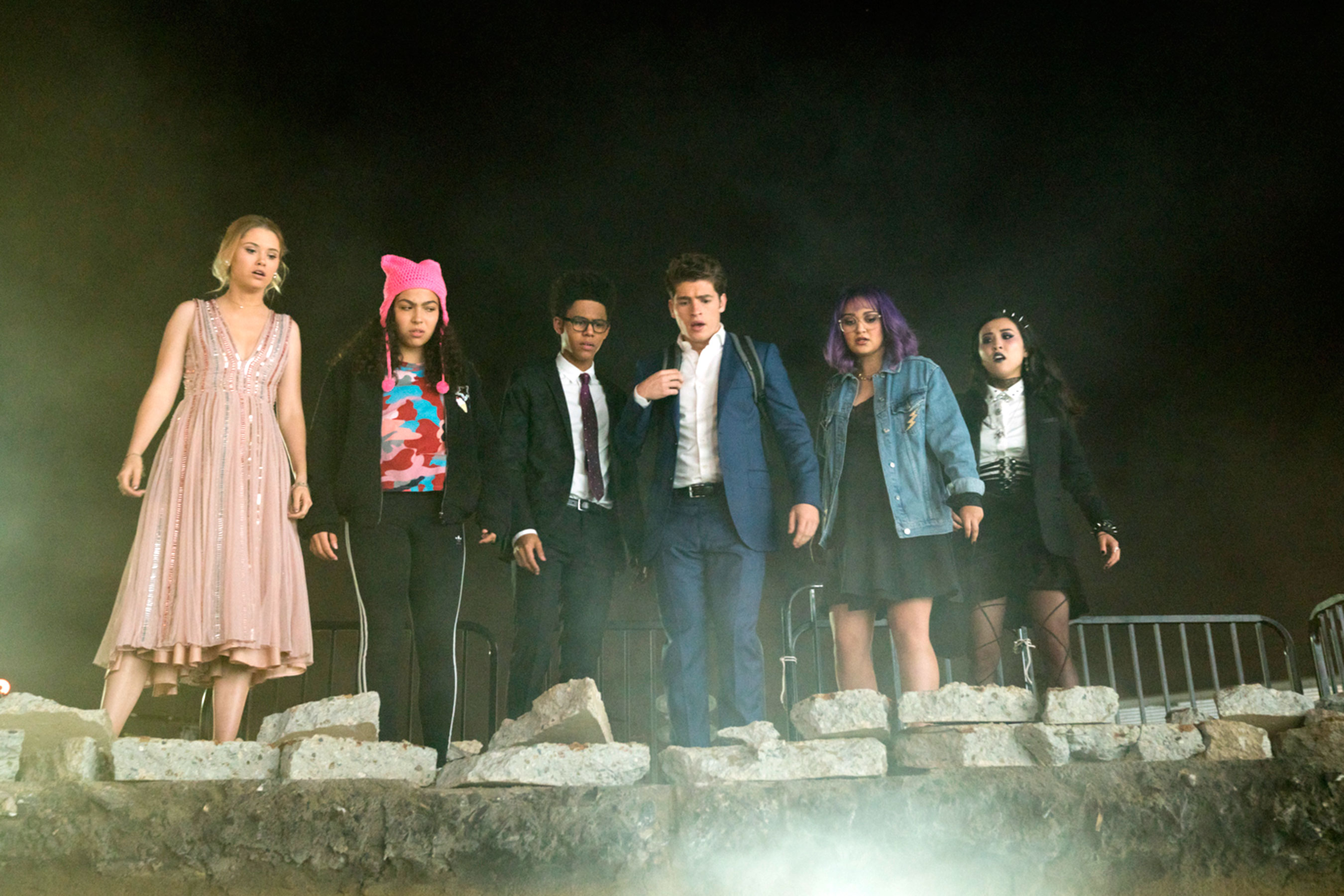 Here’s What Happened In Runaways Season 1

Runaways Season 2 is almost here! If you need a refresher on Season 1 but don’t have time to rewatch the whole thing, have no fear. Here’s everything you need to know about Marvel’s Runaways Season 1!

Runaways is a television show created by Josh Schwartz and Stephanie Savage. It is based on the comic book of the same name. Runaways Season 1 is available on Hulu to stream before the second season airs.

Who Are The Runaways?

Runaways Season 1 centers on a group of teens whose parents participate in a charity organization called Pride. The group consists of Alex Wilder, the tech-savvy leader, Chase Stein, the jock, Karolina Dean, the church’s poster girl, Gert Yorkes, the social activist, Molly Hernandez, the optimist and Gert’s adopted sister, Nico Minoru, the goth girl, and Amy Minoru, the glue that holds them all together. After Amy dies under mysterious circumstances, the friend group falls apart.

A couple of years later, Alex decides to invite everyone over during one of their parent’s annual meetings. In reality, he has a crush on Nico and wants to spend time with her again. After much conflict, they all end up coming over, but things are awkward without Amy. Then they stumble upon a secret passage. They follow it to a room where they see their parents performing some sort of strange ritual. The adults put a teenage girl inside a weird, glowing box, presumably killing her. The kids remain hidden until Molly tries to take a flash picture because she can’t see. They run before their parents can see them.

The next day, they decided to investigate their parents as well as the girl whom Karolina recognizes from her church. While investigating, they don’t find any trace of the girl, Destiny, who the church members insist went on a church trip. However, Chase and Gert do find a ceremonial box and a dinosaur in Gert’s basement. Nico finds out that Alex likes her and that her family heirloom, the Staff of One, is actually magic. She also suspects that her sister’s death might be connected to Pride. Molly learns that she has super strength but every time she tries to tell someone, they don’t listen. Karolina discovers that she glows rainbow colors but is insecure about them and only confides in Chase. Finally, Destiny’s body washes up on the beach, meaning their parents killed her after all.

Trying to prove her mom’s innocence, Karolina sends encrypted files from her mom’s computer to Alex. They find out that it’s a list of runaways who joined the Church of Gibborim but disappeared. The list includes Destiny and they deduce that the other runaways are fellow victims. Immediately after this revelation, a man named Darius Davis kidnaps Alex due to a personal vendetta against his dad. The teens band together and use their newfound abilities to save him. Unfortunately, another teenage boy is caught in the crossfires and Pride uses him as another sacrifice. The teens try to stop the ceremony, but the parents have changed locations as a precaution. They found a camera in the sacrifice room and traced it back to the ’ company.

Throughout Runaways Season 1, we also get to see the origins of Pride. It turns out that the Pride uses the sacrifices to revive a mysterious man named Jonah. He is a mystical being that the Church of Gibborim worships. He also happens to be Karolina’s biological father.

Many years ago, Jonah tricked most of the Pride members into making the first sacrifice while being filmed. In exchange, he has helped them all become the most powerful families in Los Angeles. Most of them actually aren’t comfortable with the sacrifices. Nevertheless, Tina Minoru has the footage of them performing the sacrifices so they have no choice but to continue.

Drama At The Gala

Runaways Season 1 continues at Pride’s annual gala, where Nico and Alex hack into the Minorus’ servers to get the footage. She becomes suspicious when Alex has no trouble guessing her mom’s password. They get the footage but drama brews for the teens and their parents. Gert likes Chase but he likes Karolina. Karolina discovers she can fly when she accidentally falls off the roof and Chase kisses her. Unfortunately for him, she doesn’t reciprocate his feelings because she likes Nico, who is currently with Alex. Meanwhile, Chase’s dad suffers a fall and reveals that he has a brain tumor. Jonah revives him by injecting him with a mysterious mixture and he becomes uncharacteristically happy.

While they wait for the footage to decrypt, some of the teens start to have second thoughts. Nico starts learning how to use the Staff of One from her mother. Chase becomes sympathetic to his father after learning about the tumor and their mutual love for inventing. Molly tries to get information about her parents from Mrs. Wilder and accidentally lets slip that she knows about Pride. Consquently, the Wilders tell the Yorkeses and they decide to send her to live with a distant relative.

The euphoric effects of Jonah’s medicine start to wear off, and Chase’s dad, , becomes violent with him. In order to stop him from hurting Chase, his wife shoots him. She calls in the Pride to help heal Victor, but Jonah finds out and steps in. He instructs them to sacrifice someone so they can revive him the same way they revive Jonah. Although this appears to be the only option, they can’t agree on who should be sacrificed. The debate escalates until Tina destroys the sacrificial box. With the box destroyed, Jonah takes him away and says he will revive him later. Distraught over his father, Chase destroys the footage of their parents as soon as it’s decrypted.

Nico pressures Alex into revealing why he knows her mother’s password. It turns out that Amy had hacked into their mom’s servers but got caught. She was found dead shortly afterward. Nico is angry at Alex for keeping this information from her, effectively driving a wedge between them. Nico searches Amy’s room for her cell phone, which was missing. She finds the phone along with the last text that her sister received. Someone tried to warn Amy, saying that “he” had found out and was in the house with her. This evidence confirms that Amy was murdered.

The Truth Comes Out

In the meantime, Molly’s relative gives her a note from her parents leading her to a VHS tape. It contains a message from her parents who tell her the truth about Pride. At the Wilders’ construction site, they are digging a giant hole. Jonah told them that they were looking for a renewable energy source, but the digging would cause massive, devastating earthquakes. The fact that Molly had the tape means that her parents failed to stop it and were subsequently murdered. Now it’s up to the teens to stop their parents and Jonah.

Love Is In The Air

To avoid their parents’ suspicions, the teens all go to a school dance together before the construction site. Having figured out that Karolina doesn’t like him back, Chase turns his attention to Gert. She hooks up with him but afterward insists that it was only a one-time thing. Meanwhile, Karolina finally expresses her feelings to Nico who appears to reciprocate.

With the end of Runaways Season 1 coming up, the teens head to the construction site to stop the drilling. The parents aren’t far behind. To their parents’ surprise, the teens use their powers and pet dinosaur to fight back. But the tables turn again when Jonah shows up and easily overpowers them. Realizing that he is her father, Karolina tells the others to run while she holds him off. They obey her and run but Jonah defeats and captures Karolina.

The teens are preparing to go on the run, but Nico wants to rescue Karolina first. They infiltrate the church where she is being kept and easily break her out. This is because her mother, Leslie, defies Jonah and helps them escape. She confesses to the other parents that Jonah killed Amy and Tina reveals that Leslie killed Molly’s parents. They are furious, but they still can’t go against Jonah. The teens try to catch a bus out of town, but a news report stops them. In a twisted turn of events, their parents have framed them for Destiny’s murder. Runaways Season 1 ends with the teens forced into becoming runaways themselves.

What’s Next For The Runaways?

That wraps up this recap of Runaways Season 1, but we still have so many questions. Will the Runaways be able to clear their names? Can they defeat Jonah and expose their parents’ crimes? How are they going to keep their pet dinosaur hidden? Now that you’re all caught up, don’t miss Marvel’s Runaways Season 2, premiering on Hulu on December 21st!