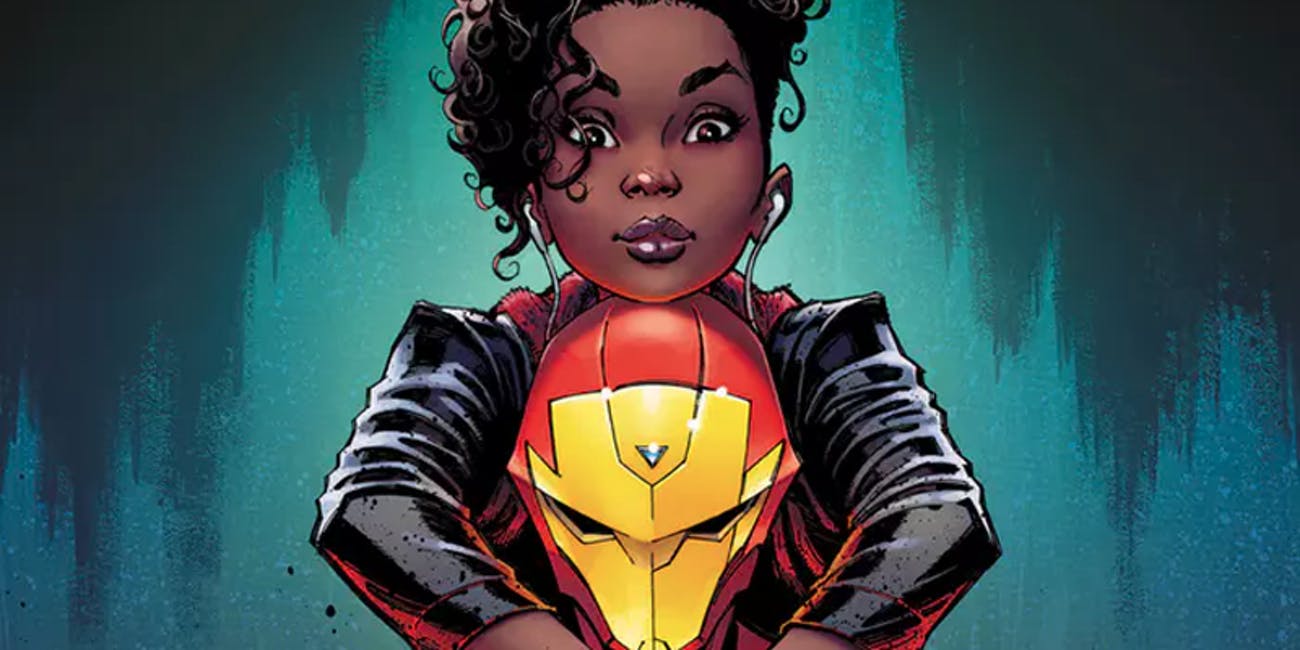 A controversial hero has just been rebooted the proper way thanks to Marvel’s Fresh Start Initiative. Riri Williams, A.K.A. Iron Heart, may not be a name known that is very well known when it comes to Marvel’s Cinematic Universe fan base. However, comic book readers over the last few years know this name comes with its own set of issues of character mistreatment.

First introduced in Invincible Iron Man Vol. 3 #7, RiRi picked up the mantel when Tony Stark was put into a coma after the events of Civil War II. Her short-lived time as the lead character in Invincible Iron Man did not do much to establish RiRi as her own individual hero. The character has so much to offer, she is an intellectual prodigy who attended MIT as a teenager and built her own iron suit in her college dorm. Instead of using this concept as a springboard to have Riri Williams become her own hero, known as Iron Heart, the writers decided to make her a replacement.

Riri Was Not The Only “Replacement”

A similar situation occurred when Miles Morales was first introduced a few years prior. Many fans were outraged by the fact that Peter Parker was being ‘replaced.’ It wasn’t even the Peter from the main 616-universe, but it didn’t matter, some fans played the diversity card. Brian Michael Bendis, the creator of Riri and Miles, wanted to create characters many could look up to. Bendis’ goal was to increase representation within Marvel to engage many readers who felt left out by Marvel’s lack of diversity. Bendis influenced the All New, All Different Marvel and Marvel Now initiatives.

What changed about Miles Morales? What made him go from being a controversial character to being accepted by the community and becoming a staple in the Marvel Universe? The truth of the matter is quite simple: Miles was able to find his own individuality right from the start. He was more than a different set of powers. He had his own supporting cast, including his parents, best friend Ganke, and Uncle Aaron, A.K.A. The Prowler. These characters, in their own ways, helped Miles develop into the hero we know today. This allowed Miles to separate himself from Peter Parker in ways RiRi never could from Tony Stark.

Even though Riri Williams did have a few original characters, much of her supporting cast carried over from Tony Stark’s. This made it difficult to separate the character trying to fill Tony Stark’s shoes from the hero trying to make her mark as Iron Heart. After all, Riri has an impressive level of intelligence, a tragic event which motivates her to become a hero, and a desire to push past her own limitations. All quality traits for a compelling hero. Yet, Riri was still unable to break away from Tony’s shadow. Even in the title, she remained printed under. Iron Heart was always overshadowed by the bold Invincible Iron Man lettering on the covers.

Her Iron Heart armor even looked similar to Tony’s.

A hero’s suit is how a fan recognizes a hero and what they stand for from just one glance. Any fan of comics or films based on comic books can take a look at a hero’s suit and instantly name the hero. Quick quiz: Name the hero who wears red and blue spandex and a mask with bug-like eyes. How about the hero in a red, white, and blue suit who carries a shield with a star? Better yet, who is the genius inventor who wears a suit of red and gold armor?

Both Riri and Miles had to find ways to establish themselves as heroes, including the suits they would wear while saving the day. Both picked up the mantle of such iconic characters and wore suits similar to the original heroes at first. However, Miles was the first one to discover that wearing the suit of his predecessor was in bad taste. With just two issues of wearing the suit, he received his distinctive black and red suit from Nick Fury and The Ultimates. Now, whenever comic-book fans see the suit, they automatically point him out as the Miles Morales Spider-Man.

A different situation occurred during Riri’s rise to become a hero. Instead of creating a distinctive suit of her own, she created armor almost identical to Iron Man’s suit. Furthermore, instead of a unique artificial intelligence system like Jarvis or Friday, RiRi installed an AI version of Tony Stark. True, the AI was a gift from Tony meant to help develop RiRi’s potential. However, the AI held RiRi back, creating a feeling that Tony Stark was still somewhat in control of the armor.

Steps In The Right Direction For Iron Heart

Riri Williams had enough controversy in the much-needed All New, All Different Marvel push for representation in comics. But the creative team behind the Riri Williams Iron Heart character recognized her flaws. They finally implemented a number of changes to the character to help Iron Heart stand out and become her own hero.

Riri’s first step toward becoming an individual hero was joining a team of young heroes known as the Champions. Tony Stark was brought back to the land of the living and reclaimed the mantle of the Invincible Iron Man. This allowed RiRi to develop her character alongside a team seen as Avengers-in-training. The Champions comic allowed the next generation of Marvel heroes to grow as a team and as individuals. Riri joined the team as a temporary replacement for Iron Man.

Over just a few issues she began to separate herself from this label. Comic book readers finally began to call her by her code name, Iron Heart. As a result, her fan-base began to grow. After just 6 issues and an Infinity Wars event, Riri made the ultimate move to solidify herself as Iron Heart. Not only by developing her character into the hero we all knew she could be, but by changing up her armor to look the part.

Making its debut in Champions #22, Iron Heart 3.0 was a much-welcomed change for the Iron Heart character. This was a dramatic update to her previous suit from top to bottom — Riri was officially separated from the Iron Man character. This new armor gave her a unique design, from the color scheme to the helmet design, and the heart logo on the chest.

These designs brought forth aspects of RiRi’s character that have not yet been explored. She was even able to create her own artificial intelligence with significant meaning to the character. Named after her best friend who was lost in a tragic accident, N.A.T.A.L.I.E. helps Riri become a better hero. Natalie was the person who helped inspire her to become a hero in the first place.

Riri Williams Iron Heart is only on its second issue and is already a massive improvement over RiRi’s time as the lead in Invincible Iron Man. The series is a new installment in Marvel’s Fresh Start initiative. This is exactly what it feels like for Riri as a character, a “fresh start” by re-introducing the “work in progress” concept to the Iron Heart persona. Showing Riri constantly tinkering with her new armor in panels, she’s always finding ways to improve functionality for increased efficiency.

Not only has the concept of the character improved, but her surrounding supporting cast has likewise taken on some unique additions. One of these is an over-enthusiastic Dean at MIT, who does whatever he can to convince boosters to invest in the school, even parading Riri’s inventions. The other is a friend and confidant, Xavier, whose conversations make her feel like a normal teenager. She also has a new AI assistant based on her former best friend, Natalie, as aforementioned. Plus, she now has her own villains with the introduction of a crime syndicate known as the Wellspring of Power. The organization manipulates people to do their bidding, focusing mainly on children and a close friend of Riri’s.

Their motives will surely be reviled in the upcoming issues of RiRi Williams Iron Heart.

The Future Is Bright For Riri Williams’ Iron Heart

Riri Williams has always had a solid fan base; yet, she could not cross over to mainstream Marvel. Sure, the character’s popularity was boosted once she took over the mantle of Invincible Iron Man, as well as when the IRONHEART Live Action Short Film was released. The film was made by a few college students and captured the attention of many critics. If Riri Williams continues on this trend of character development, both personally and as the Iron Heart Persona, it’s safe to say she has the potential to be a staple in the Marvel Universe.

As many have seen with the Miles Morales character, Riri is now receiving this same character development treatment. Combined with inspiring artwork and brilliant writing, Riri Williams’s character in Marvel’s Fresh Start reboot has definitely improved. Riri Williams’ Iron Heart will be a featured hero on the Marvel Rising animated television show. She will sport her new 3.0 armor, focusing not on her past origins, but the character they are trying to make her become.

She is a character so full of potential since she made her first appearance. If Riri Williams’ character and fan base continue to grow, the Spider-Man Into The Spider-Verse movie may not seem so far-fetched. Hopefully, we can see it within the next few years, right, Marvel?