With the additions of Zod, Arkillo, Hector Hammond, and Arkillo, it is more than reasonable to view the team as a disaster waiting to happen. Hal Jordan and The Green Lantern Corps #48 is a funny, action-packed comic book. With the future of the corps members in question, there is a lot at stakes in this final story.

The story begins with The Darkstars launching their invasion on the Planet of Mogo. For those who do not know, Mogo is the Headquarters of The Green Lantern Corps. The Darkstars are met with heavy resistance from the corps, led by Kilowog. The team of Robert Vendetti and Rafa Sandoval work excellently together to create an intense and epic battle. 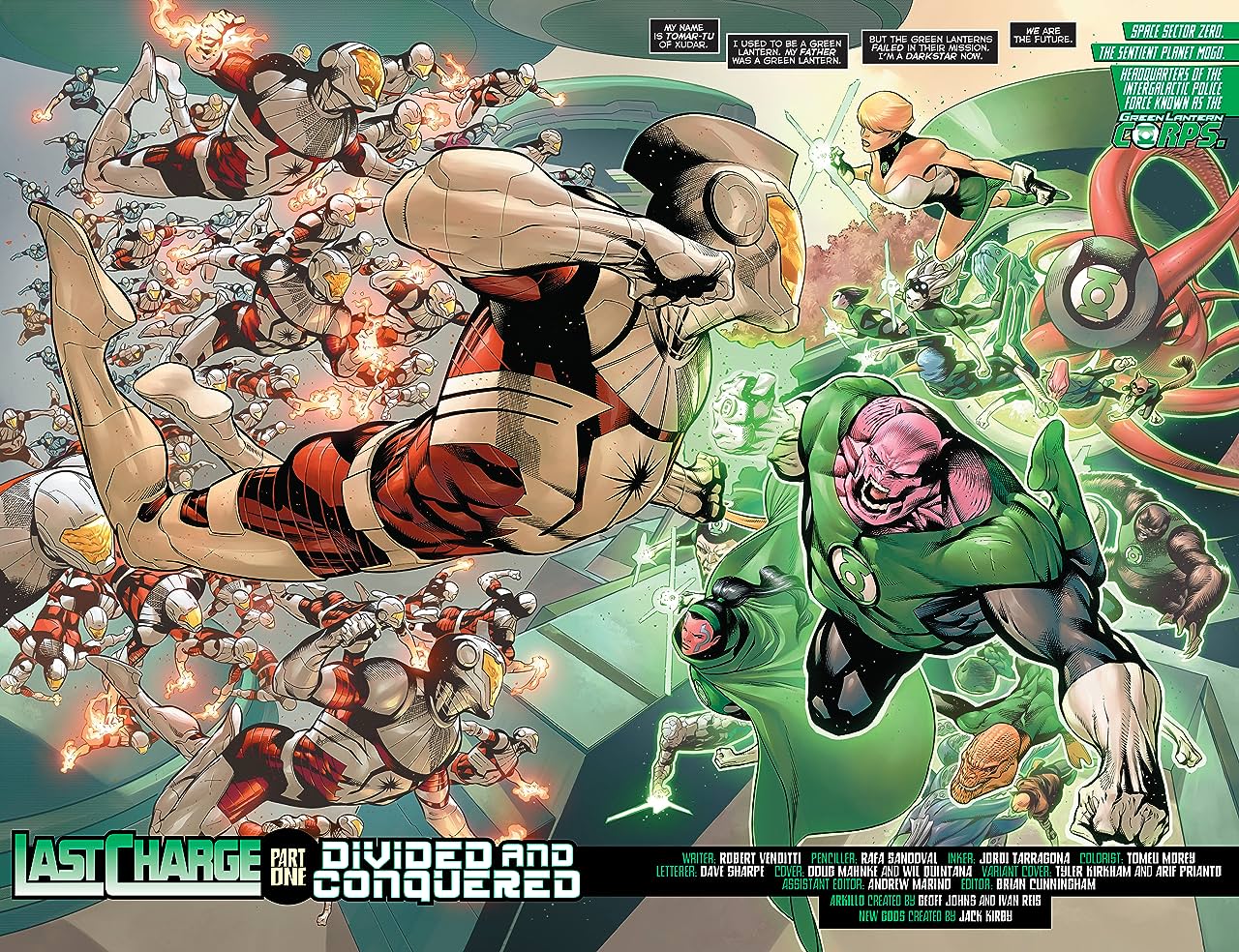 Meanwhile, we find our corps leaders John, Hal, Kyle, and Guy, coming together to plan their counterattack to the Darkstars. In the midst of a serious story, the creative team adds a perfect amount of comic relief. As the team is planning, Hector Hammond uses his mind tricks to create the illusion they are in fun locations. This causes a bit of humorous tension from the other members, despite Hammond only wanting “Everyone to be happy.” This leads to some predictable frustration between the corps and its new members.

Meanwhile, The battle of Mogo continues with the Darkstars finding their way into the sciencells, where they plan to kill all the criminals held there. Though this planned is foiled as we find that Kilowog has relocated the prisoners to protect them from the Darkstars.

Guy Gardner and Kyle Rayner reach Mogo and begin to aid in the defense of the headquarters. The art team of Rafa Sandoval, Jordi Tarragona, and Tomeu Morey work together fabulously here. With incredibly detailed panels, and bright coloring makes the pages pop in front of you.

The battle consists of brutal hits, awesome lantern constructs, and a beautiful sense of urgency by both, the corps and the Darkstars. The battle gets only more intense when the Guardians of The Universe arrive to join the corps.

As the issue ends, we find Hal Jordan, and Hector Hammond together again in the Darkstar stronghold. Despite Hector constantly reminding Hal of the fact that he wishes he could be up helping the rest of the corps, Hal knows the importance of his task. The art in Hal Jordan and The Green Lantern Corps #48 is purely spectacular. The team works together to give us some epic battle scenes and true emotion from the characters. Also, the contrast between the bright Green from the lanterns and the red from the Darkstars help make each panel stand out on its own.

They also give us plenty of constructs and brutal fight scenes to add to the enjoyment. The team makes it easy for Hal Jordan and The Green Lantern Corps #48 to be as fun an issue as possible.

Final Thoughts on Hal Jordan and The Green Lantern Corps #48

Robert Vendetti and the crew have done an outstanding job. They have taken a long approach to the Darkstar story, but it continues to impress. All in all, Hal Jordan and the Green Lantern Corps #48 is a great example of what superhero comics are all about.

Great art, intriguing plot/dialogue, and most of all it makes you want the next issue right now. With 2 issues remaining in the series, it is exciting to think about what will happen between the Corps and Darkstars, and what will be left after it’s all over. A great read by Robert Vendetti and the team and highly recommended.