The Darkstars are rising and we are inching closer to what feels like an epic conclusion to this series. Through the past few issues, we have seen the multiple storylines for Hal Jordan and The Green Lantern Corps. All of which are trying to create some way to defeat The Darkstars who are being led by former Green Lantern Tomar Re. All of whom have run into a few speed bumps in the process. However, it is the time we have reached Hal Jordan And The Green Lantern Corps #47.

Mind Games With Hal Jordan and The Green Lantern Corps

The story picks up where we left off in issue 46, in Hal Jordan’s quest with Hector Hammond. Hammond has taken over Hals mind causing him to forget his memories, who, and what he is. This leaves Hal on an unfamiliar planet he has no memory of.

An interesting battle takes place within Hals mind between Hammond and a voice in Hals’ head that is telling him not to listen to Hammond.

Writer Robert Vendetti does a fabulous job creating an interesting back and forth between the two. This is topped off with a beautiful page by penciler Fernando Pasarin of Hal being shown past memories of him as a Green Lantern by the voice in his head. Hammond tries to convince Hal that he is a hero but the voice refuses to go away and grows louder.

Hal finally regains his memories, puts together where he is, and why he chose to take Hammond here. Hal is on the same planet where he forged a Green Lantern ring from his very own willpower.

This was the only planet Hal could have gone in order to escape from the control of Hector Hammond. Vendetti then throws us a curveball and Hector admits that this was all an act just to prove that with not even remembering his memories as a Green Lantern Hal not only couldn’t kill but could not let another kill. The two leave to continue their job at hand.

In the last issue, Guy Gardner traveled to earth after becoming a Darkstar (because of course, he did) to kill his father for all the pain and suffering he put him through as a child. Though before he was able to finish the deed he was stopped in his tracks by a member of the Sinestro Corps Arkillo. Vendetti creates an emotional act between the two. Arkillo constantly reminds Guy why he’s a Green Lantern and how killing his father will not change the past. 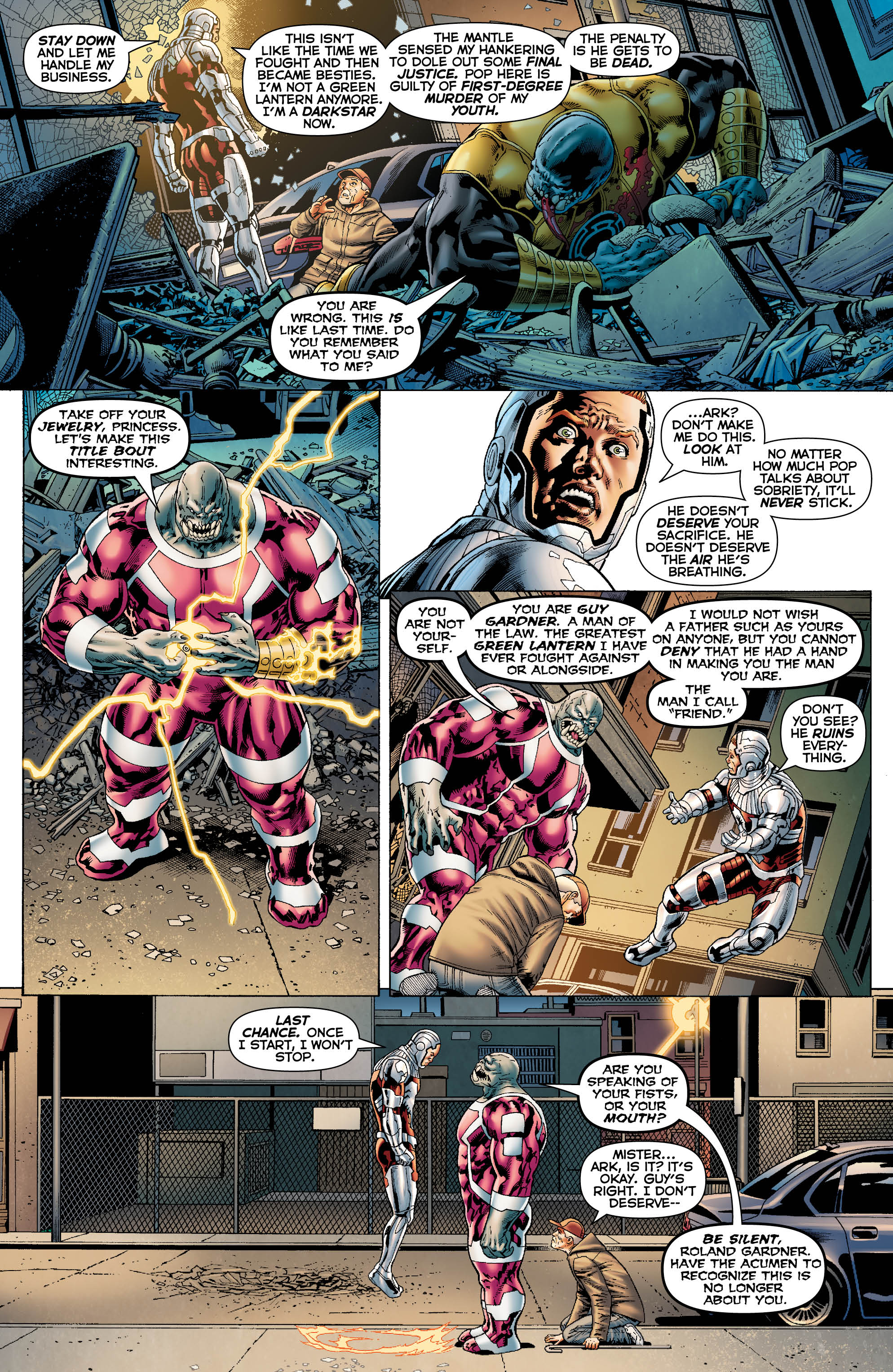 Arkillo does all this while continuously taking hit after hit from Guy. The creative team does an excellent job collectively creating a violent, yet very touching scene here between the characters. Guy is presented with an opportunity to kill Arkillo but when asked if this is what he truly wants he breaks to tears.

Artist Fernando Parsarin succeeds in his attempts to create real emotion in Guy’s facial expressions here. This causes Guy to become a Green Lantern again. Similar to Hector Hammond, Guy reveals how he purposefully let the Darkstars take him over to discover how things worked from the inside and give a description of the intense experience.

Kyle Rayner has been taken as a prisoner on New Genesis where he had planned to recruit Orion to join forces against the Darkstars. This story takes a bit of a backseat in this issue compared to Hal and Guy’s storylines. With the help of Orion Kyle manages to escape the Highfather and his guards.

Meanwhile back on Mogo, Kilowog who has been left in charge of the Green Lantern Corps headquarters seems to have his hands full. We get a beautiful page with what looks like an invasion from the Darkstars is about to commence.

In conclusion, Hal Jordan and The Green Lantern Corps #47 is a fun entertaining comic. Despite the issue not containing a large amount of action, it is still a fun issue in what has been an exciting story arc. Robert Vendetti and Fernando Pasarin create a well-paced flow throughout the issue to keep you entertained at all times.

It seems we will have to wait until next issue to see where things stand with John and Zod. All the different storylines seem to be heading on a collision course for an epic conclusion.