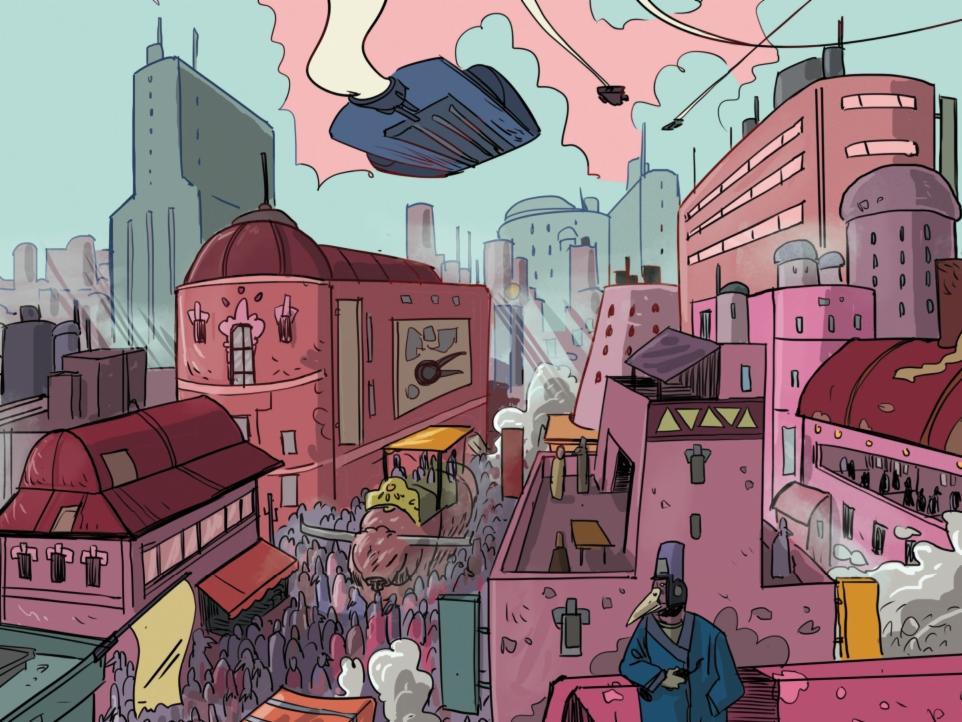 Gryffen: Galaxy’s Most Wanted #7 team may or may not be listening to me directly, but they are squishing down my whiny complaints one by one. This comic was created by writer Ben Kahn, artist Bruno Hidalgo, colorist James Penafiel, and letterer Sal Cipriano. I enjoy the concept of this issue because it talks about the effects of the Reach, and shows the planet before the evil empire gets to them. This gives the opportunity for world-building and bonding between characters because they’re preventing a threat as opposed to stopping one already in motion.

There’s also the concept of Captain Gryffen’s nightmare. The foreshadowing displays a glimpse into their potential guilt that drives them to revolt against their former regime. With this revelation, we have an idea that they’re not as unflappable as they first appear.

Writing Has A Necessary Slow-Down Since Heroes Needs To Rest

For Gryffen: Galaxy’s Most Wanted #7, this one has less action. It does have a dialogue on capitalism and the way regimes break down societies. I liked the ebb and flow of the writing that occurred between #6 and #7. By going from fast to slow writing, there’s a chance for a breather.

We also have an opportunity to see what Gryffen wants to keep safe in this new planet and untouched by the reach. I admired how there was a chance to see what the heroes could lose when it comes to their quests. For most of the media I consume, I don’t often get a chance to see that resting period. It does come up, but for briefer times then this because seeing people take a break isn’t as exciting.

The choice of Gryffen and her aquatic engineer Seti-Stela to spend time together is a smart choice. Since Seti-Stela is the newest member, this chance gives him an opportunity to show off his personality. One of the other unique traits is that Seti-Stela’s species gave us a chance to talk about gender and how it’s mutable. This dialogue deepens the lore of Gryffen by giving species more unique traits beyond their physical appearance.

The Bright Colors Mesmerize Me In Gryffen: Galaxy’s Most Wanted #7

I love the warm colors from the nightmare scene because it’s not the palette you would expect. There’s also a coldness in the art that you didn’t expect from a comic using humor. The ability to switch into a darker tone does help bring a unique tone to Gryffen: Galaxy’s Most Wanted #7. I like how there’s a chance to go deeper based on the interpretation of the art rather than the writing.

While I tend to think of the writing as the main way to push a story forward, there can be a lot said without words in this art. The implication of Gryffen’s past is terrifying in its symbolism because you don’t know the truth. For the rest of the comic, the quality remains the same. Looking at the character designs on the new planet they landed was inspired.

When we had a chance to look at the populace, they looked as if they were unique in comparison to creatures from previous issues. Lettering and panels work well to maintain the vibrancy of the work. This time around I liked how the lettering does emphasize some of the subtler emotions.

What Will Occur In Gryffen: Galaxy’s Most Wanted #8?

The answer I’m going to go with is “I’m not sure,” which is a first for me. It’s in Gryffen’s personality to be spontaneous and I’m glad that quality translates into my cluelessness. The two characters on the ground in the environment do have an idea of what’s going to occur, but the readers are in the dark. It leaves me excited to see what the next issue will bring!

Gryffen: Galaxy's Most Wanted #7 by Ben Kahn, Bruno Hidalgo, James Penafiel, & Sal Cipriano
We're really getting a chance to see the Reach in all its painful supremacy. Personally, I'm quite happy to see my complaints falling apart.
PROS
Strong Set-Up
Consistent Talks of Capitalism and Choices
Art and Writing Mix Together Well
CONS
May Be A Slow-Burning Issue
100
#AntiThanos