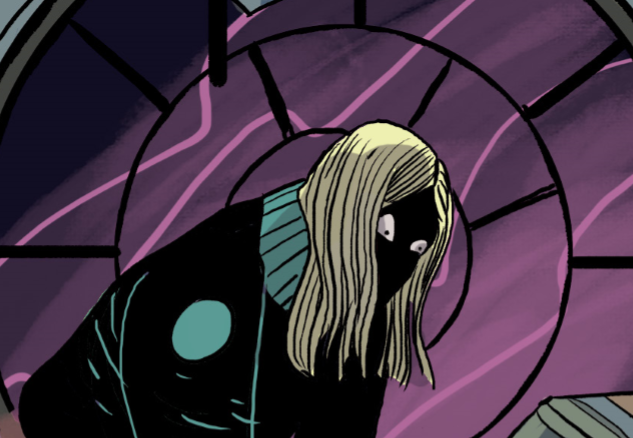 Gryffen: Galaxy’s Most Wanted #3 Has Our Fun Vote

Gryffen: Galaxy’s Most Wanted #3 has yet to defy a Nazi regime, but our intrepid crew is, sort of, working to that conclusion. We debate whether they’ll succeed. Written by Ben Kahn with art by Bruno Hidalgo, Gryffen: Galaxy’s Most Wanted got its colors from James Penafiel and letters from Sal Cipriano. We’ve got our genderqueer, sci-fi adventure up and kicking, but how much does this comic kick?

We’re going to talk about the past as well as the future when it comes to plot. After escaping from the prison of the Sovereign Reach, Captain Lyla Gryffen obtained a crew. They come in the form of Private Telika. A resistance member, the good Captain threatened by knifepoint. On the other hand, there is the ‘smartest man in the galaxy’ Elliot Dao as Gryffen’s boyfriend. This next issue ramps up the stakes by throwing genocide and romantic connections into the mix.

We’re beginning to get characterization for Telika, Gryffen, and the resistance. The writer establishes that this minor character doesn’t have a family. The Sovereign Reach took the Private from one of their camps and raised her. In the same space, the reader realizes Gryffen might’ve left someone they loved behind as well. This person is an individual who works for the regime. Apparently, this choice allowed us to see humanity within those who uphold the regime.

They are still willing to starve an entire species out because one of them rebelled. I was hoping for some more nuance from the antagonists, but we can run with blatantly evil actions. The reason I wanted more subtlety was because of how aware this comic felt to its tropes. A super evil regime with Nazi connotations without the full consequences of what that means beyond ‘evil’ is played out. Due to this choice, this series falls into the fun bracket, rather than any connection with strong political commentary.

As for the resistance, we know they can’t be everywhere at once, but the key point is they’re not yet proven ineffective. I wonder how the resistance the writer is going to use the resistance in the future. Though we haven’t seen a lot from them as a unit, they are in the story. It would be too easy to keep them out of play to bolster the main cast of characters but would fall into expectation. I value what Gryffen does to subvert expectations. While also maintaining a strong standard for storytelling, the issue creates a delicate balancing act. It doesn’t need to completely rely on shock value because the narration is strong.

The art remains consistent, which remains my highest form of praise. Hidalgo keeps the bold colors, the strange body language, and the stylized world. We expect this from the first two issues and we continue to get these traits. With the introduction of two characters, Gryffen maintains its unique character designs. The representation continues to be strong. There isn’t any wild, innovative paneling to talk about, but they serve the comic’s purpose. I’d say the same for the lettering because the words blend together into the aesthetic. They don’t intrude, nor do they excel in a way that makes for noticeable commentary.

Should You Read Gryffen: Galaxy’s Most Wanted #3?

At this point, the reader is going to know whether the comic is worth their money because the tone has stabilized. There aren’t going to be any drastic changes to Gryffen that throw you off of what you signed up to read. I like the consistent nature of the tone and art because the theory is this series will stick to its landing.

While I did hope for stronger nuances, the uniqueness of this piece helps make it a necessary addition to the comic’s medium. It’s a rare opportunity for those who don’t conform to the gender binary to see themselves in a well-written work. Gryffen: Galaxy’s Most Wanted isn’t a piece you can give to your kids, but adults will appreciate it well-enough.