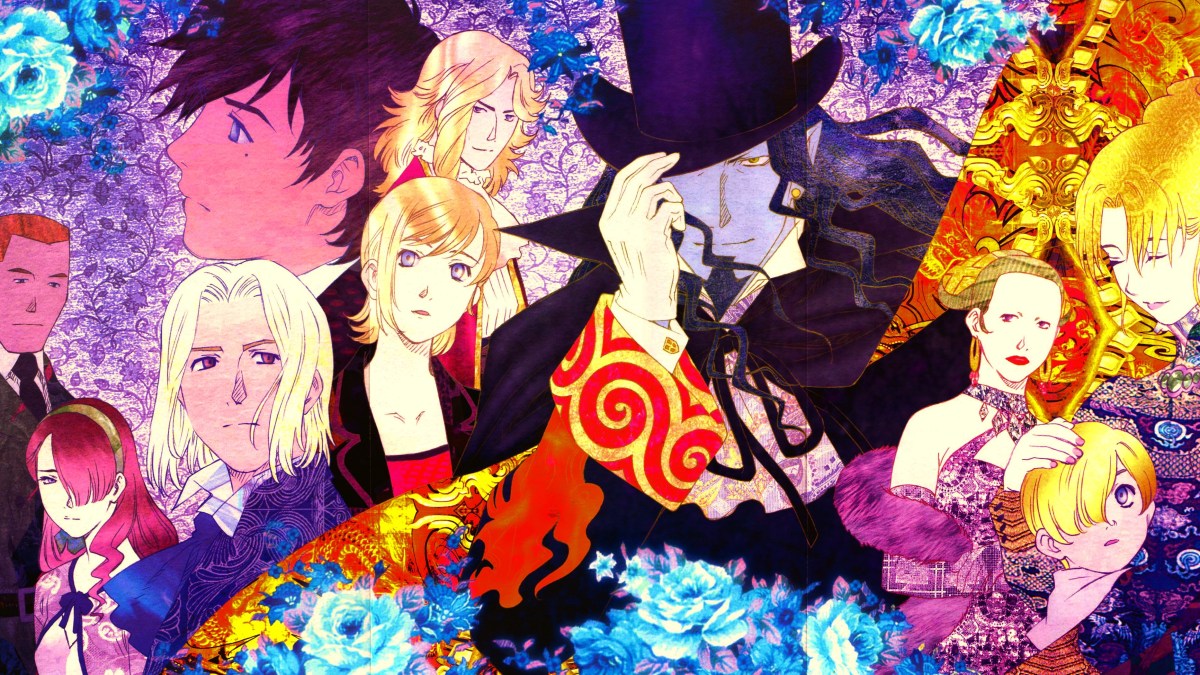 Gankutsuou, A Surreal Blend Of Classic Literature And Sci-Fi

As far as underrated anime goes, Gankutsuou: The Count Of Monte Cristo is amongst one of the most creative and original series still under the radar. As a futuristic version of Alexandre Dumas’s The Count of Monte Cristo, Gankutsuou takes the classic revenge tale into a surreal world. The abundance of patterns with overlaying animation makes Gankutsuou a stand-out series aesthetically. And like the book it loosely takes from, Gankutsuou indulges in the story of a complex revenge plot twenty years in the making.

Gankutsuou follows Albert, a young nobleman who seeks to find more meaning in his life. Inspired by what he believes to be a fated meeting, Albert becomes good friends with the infamous Count of Monte Cristo, a mysterious man who has traveled throughout space but is looking to settle down in France. However, the more The Count integrates into Albert’s social circle, the more that social circle begins to show its cracks. After a sheltered life in comfort, Albert discovers the corruption within his own family and class. Gankutsuou‘s expansive cast all fall into a downward spiral at the hands of The Count and his plot for revenge.

Perhaps most notable about the anime (besides the visual assault of patterns) is the unexpected interpretation of a classic piece of literature. Gankutsuou is a sci-fi portrayal of Alexandre Dumas’s The Count of Monte Cristo, an adventure novel that was serialized from 1844 to 1846. Instead of the 1800s, Gankutsuou takes place in 5053 where space travel and the presence of aliens are the norm. The anime utilizes the contrast of science fiction and elements of classic adventure tales. The characters’ speech, background, and sense of aristocracy are still tied into the novel’s era. Even the clothing and settings are futuristic updates of the era-appropriate aesthetics.

The culminating clash has a similar effect as the 1996 Romeo and Juliet, except it’s pushed to even more extremes and further blurs the division of the past and future. Gankutsuou creates a neo-romantic science fiction that permeates every detail of the series. The use of outer space allows for creative exploration and world-building. Carnival takes place on the moon, which is a stand-in for Venice, and duels are fought in mecha suits. The blend of old and new should be jarring, but the aesthetic is so strong in Gankutsuou that it creates a balance.

The Art Of Gankutsuou

Perhaps the most striking thing about this anime is the art style. The show utilizes a type of animation that overlays complex patterns. The pallets are bright, sometimes clashing with different patterns and textures. The figures are animated over the patterns, a bit like cutouts, which gives a unique effect of motion. Another anime with this style of detail and layering is the series Mononoke.

The art of Gankutsuou is overwhelming in the most luxuriously pleasant way. There is an aesthetic blend of eras and cultures; every corner of the series is packed with patterns and colors. And as the world is often so bright and technicolor, the dark moments really stand out. The void of space and The Count’s dark private rooms heavily contrast the rest of the scenes. Gankutsuou is delightfully weird and surreal to look at, and the art strategically embodies the tones of the intense story.

Set Up & Pay Off In Gankutsuou

The Count Of Monte Cristo is one of the most famous revenge stories still utilized in the media. The novel follows Edmond Dantès, a young sailor who is betrayed by his friends. Edmond is set up and accused of treason, then sent to life in prison. Edmond escapes, finds fortune, and reinvents himself as the Count of Monte Cristo. The Count then crafts a revenge plot against the men who set him up to be imprisoned over twenty years prior.

How Gankutsuou Makes The Most Out Of Its Plot

Gankutsuou follows this basic premise but begins in the second part of the novel to follow The Count enacting his revenge. It starts with his meeting with Albert, the son of one of the men who betrayed him. The men include a corrupt banker, a judge who revels in giving death sentences, and Albert’s father who is heavily involved in violent politics. The Count sets off a chain of events that reveals the true nature of these men and their families. What probably serves the anime best is the fact that it is a series instead of a film adaptation of the novel. Gankutsuou allows the perfect amount of time for the viewer to get comfortable with the world and the families.

Establishing details about the families becomes a trigger for immense plot points. And from Albert’s point of view, the audience sees how deep the corruption of the elite goes. The anime takes its time revealing dark secrets about the central families. Outside of the unspoken secret of Edmond Dantès, the families have many hidden scandals, including fraud, affairs, and abuse. The Count’s complicated revenge plots involve using the family’s own dark secrets against them and crumbling their public facade from the inside out. It’s difficult not to enjoy the potential downfalls of these families when the anime showcases their internal vices and corruption.

The Count As A Protagonist And Antagonist

The Count is a unique protagonist in that he is also an antagonist. His subtle manipulation of people is impressively reprehensible, and he is an enjoyable character to learn about and follow. Working within the confines of society, The Count sets up plots that let characters fall into their own traps. The Count is a layered character; watching the anime, it is easy to see how he manages to charm and manipulate the rest of the cast.

While The Count is the main character, he is still a mysterious character. The anime drip-feeds details about his past rather than having a singular big reveal. It becomes a slow realization of what fuels his motivation to brutally destroy these families from the inside out. In many ways, the character’s growing suspicion and anxiety about The Count’s possible background reflects the audience’s experience. This keeps the suspense growing throughout the entire series, with stakes continuing to rise and getting more complex in every episode.

The Count’s heinous deeds could place him amongst some of the worst villains. Multiple innocent characters suffer due to their own use of manipulation. However, he is still one of the main protagonists. The anime focuses on his plight for justice and his past suffering. The Count is both the hero and villain of Gankutsuou and the anime does not shy away from portraying him in the extremes of both positions.

The Morality Compass That Is Albert

Fifteen-year-old Albert is the other protagonist of the series and stands in for the audience in getting to know the mysterious Count. Albert is naive and ignorant but subverts a lot of annoying traits often attributed to his character type. Rather, he shows the lack of freedom in both his age and his status. The younger cast reflects on their bleak futures in arranged marriages, but Albert yearns for bohemian ideals in his life like hope, fate, and true love. This culminates in his relationship with The Count, who has all of the sentiments and freedoms that Albert craves.

Albert defends The Count’s sketchy reputation and blindly confides in The Count as his own home-life begins to crumble. However, Albert is among the children caught in the crossfire of The Count’s plot against their parents. While it should be easy to root for The Count, it becomes increasingly difficult with the expansion of Albert’s friends. Many of Albert’s young friends are just as victimized by their families, and The Count’s inclusion of them in his plans adds another layer of moral complexity to Gankutsuou‘s plot.

Both Japanese and English versions of Gankutsuou have similar cast types, but each has its own flavor.  The Japanese version incorporates more French as a homage to the setting, a detail that the English version should have carried over. A stand-out performance in the English dub is Jamison Price as The Count. The subtle range in Price’s performance conveys the complexities in the Count’s characters that can whiplash from sympathetic to sinister.  Whichever is your preference, both the original Japanese and English recordings deliver similarly compelling performances?

Gankutsuou Is A Weird, Dramatic Trip Well Worth Taking

Gankutsuou seems to put as much detail as possible into design and world-building. It is difficult to compare it to any other series, in a sense that it relishes so strongly in its own aesthetic and genre. While the number of characters may be difficult to follow at times, the anime’s pacing allows for the important players to have enough focus.

Meanwhile, all of the world-building and set-up of those early episodes are well worth the climactic payoff. Gankutsuou takes the best from The Count Of Monte Cristo and fills the rest with delightful weirdness. If you are looking for something out of the ordinary, Gankutsuou delivers and is available on Crunchyroll.

Gankutsuou, A Surreal Blend Of Classic Literature And Sci-Fi
WRITING
ILLUSTRATIONS
Reader Rating0 Votes
PROS
Unique, beautiful art style and animation
The Count is a dynamic protagonist
Complex plot full of revenge, betrayal, and drama
Unusual blend of classic literature and sci-fi
CONS
Outdated CGI clashes with the art style at times
The large cast can be hard to keep track of, and leave some characters flat or underdeveloped
Some may find the animation distracting or overwhelming
4.7
STREAM IT