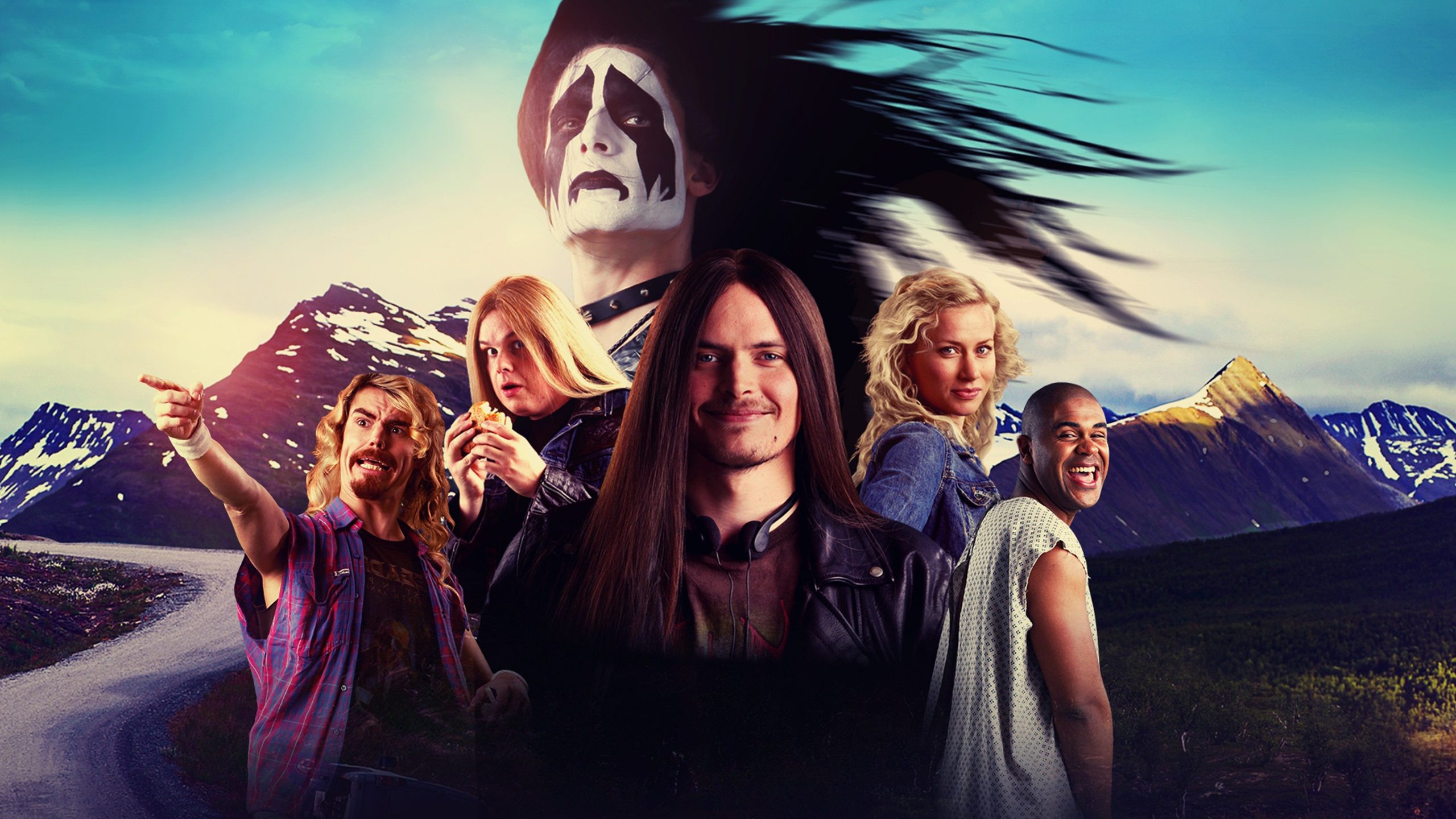 Follow Your Dreams In Heavy Trip With A Heavy Metal Flair

Movies that feature the metal community are rare, to begin with, but even rarer are metal movies that are completely grounded in reality.  Metal media such as Tenacious D The Pick of Destiny, This Is Spın̈al Tap, or Metalocalypse often (lovingly) borders on parody with exaggerated metal elements or the inclusion of fantasy. Finland’s 2018 film Heavy Trip, however, is a light-hearted story depicting a metal band trying to find their way into the world.

Heavy Trip was directed by Jusso Laatio and Jukka Vidgren, who wrote the script alongside Aleksi Puranen and Jari Olavi Rantala. The film’s genre subverts the usual portrayal of metal in media, even media created by and for other metal fans. While poking fun at and homaging the metal community, Heavy Trip tells a comedic story about outcasts chasing their dreams.

Heavy Trip follows a group of metalhead friends in a small, rural village.  Despite practicing for twelve years, their unnamed band has never performed outside of their reindeer slaughterhouse practice space.  The death metal band includes Turo (Holopainen) as the vocalist, Pasi (Ovaska) the deadpan bassist, Lotvonen (Jaskio) as the guitarist, and Jynkky (Heikkinen) as their optimistic drummer.

The movie depicts the everyday lives of the band, particularly Turo who works at the town’s psychiatric institution as a caretaker and custodian. It becomes clear very quickly that the band is the town’s outcasts. Turo endures harassment about his appearance and often is labeled as a criminal or a creep, targeted by the police. Practicing with his band is Turo’s place of belonging, and the film builds the friendship between the four social outcasts.

After getting inspiration in a humorously gruesome manner, the band wrote their first song and recorded a demo. From there, the movie unfolds into absurd antics in the band’s quest to make a name for themselves and play at a Norwegian metal festival. As the band becomes increasingly determined to be their town’s heroes and make it big, Heavy Trip turns from slice-of-life into a road trip adventure. Plenty of heavy metal references and slapstick intertwine with the band’s epic quest for metal fame at the festival. But under the hijinks and comedy, the band’s true journey is towards staying true to oneself and the struggle of following your dreams.

While metal culture shapes the plot and characters, Heavy Trip is an open and universal story about outcasts in a small town. Regardless if you like metal or even know anything about the scene, the writing of the film depicts enjoyable characters and a sweet storyline. However, if you are into metal you can appreciate some of the in-jokes.

The film pokes fun at death metal band names and the overly technical metal genres (Pasi describes the band’s genre as “symphonic post-apocalyptic reindeer-grinding Christ-abusing extreme war pagan Fennoscandian metal”). There is also, of course, the irresistible joke of “corpse paint in inappropriate settings.” While most of its comedy caters to metalheads, the jokes still land in the self-awareness of the writing. A lot of the humor is also character-driven, and the writing is strongest in characterization.

Where The Writing Shines

The chemistry between the band is the strongest part of Heavy Trip‘s writing. The members are unique, and the diverse characteristics work well to convey a long-term bond. They bicker about guitar riffs, they collaborate, and they lift one another up. Probably the strongest example is the relationship between Turo, who is shy and unsure of himself, and Jynkky, who is much more outgoing and encourages Turo as a frontman and in romantic endeavors.

Turo has internal struggles with his place in life, and the movie has many instances of the band supporting him in these vulnerable moments. Additionally, Heavy Trip keeps the focus is on the friendship, and that never wavers despite hardships that Turo brings onto himself and the band. Heavy Trip is a refreshing look at the love that music brings between different people.

Heavy Trip showcases how far people are willing to go for their dreams. After recording their first demo, the band chases the opportunity to play at a huge festival. The absurd lengths the band will go to in making it big are comedic, but they also showcase their passion. Turo faces several drawbacks and lack of support outside his band, but the bandmates stay positive. With every bombed show and setback, they call it good publicity and use it as motivation. Ultimately, the movie becomes about chasing a dream that seems out of reach and going to extreme lengths to keep that spark alive, a message that resonates outside of metal music.

As the movie makes clear, metal and metalheads face a lot of stereotyping. Heavy Trip shows a realistic experience of the harassment and othering that many subcultures face, especially in conservative settings. By keeping the world and characters grounded, the story becomes that much more relatable. Additionally, it keeps the tone light-hearted, as the focus is on celebrating the band’s journey and bond.

Turo, being a caregiver and written as passive and shy, subverts a lot of the usual portrayals of rocker characters. Though they can be somewhat rowdy (such as breaking into zoos or using traffic cameras to shoot their album cover), the bandmates never cause any disturbances to the town, despite the town’s treatment of them. The main characters are normal, dorky guys who speak nonchalantly about their love of brutal aesthetics. While that is in part a source of comedy, it is also the charm of the movie. Heavy Trip features the community aspect of metal from the point of view of four average people.

The movie also touches on the bonds between other outcast groups. Turo’s relationship with Oula, a resident of the psychiatric hospital, is a minor but character-defining detail. Nurses have labeled Oula as violent, but Turo helps find Oula an outlet for metal music and drumming. The band also crosses paths with a LARP group who they, of course, immediately vibe with. While Heavy Trip is a comedy above all, it touches on the inclusivity of subcultures and outcasts with one another.

Subtle Beauty During A Heavy Trip

Heavy Trip‘s production is simple and clean. As the story is character-based, much of the focus is on dialogue and visual humor. But the movie balances comedy and sentiment, and the cinematography reflects those moods without being jarring. Along with the writing, the film utilizes the subtle juxtaposition of the band and their surroundings for a comedic effect.

The film also takes advantage of its rural setting for some beautiful shots in and out of the village. Now that it is streaming outside of Finland, Heavy Trip is an opportunity to showcase both international music and settings. The fully subtitled film is currently for rent or purchase through Amazon, YouTube, GooglePlay, and Vudu.

Heavy Trip comes across as a screwball comedy featuring metalheads, but its heart is what makes it a compelling story. The universal message and portrayal of outcasts add a sweetness to its self-aware comedy. Besides landing a lot of jokes about the metal scene, the movie is an upbeat tale of friendship and dreaming big. Additionally, the film portrays the metal scene as inclusive and subverts a lot of the usual tropes. Heavy Trip hits every unexpected mark for a death metal movie; it’s brutal, hilarious, and oddly wholesome once you get past the reindeer carcasses.

Follow Your Dreams In Heavy Trip With A Heavy Metal Flair
PROS
Healthy blend of comedic and heartfelt moments
Charming characters
Great depiction of an underrepresented subculture
Corpse paint shenanigans
CONS
There isn't a full album available from the band and there should be
Film could have explored more of the secondary characters
4.3
RENT OR BUY!