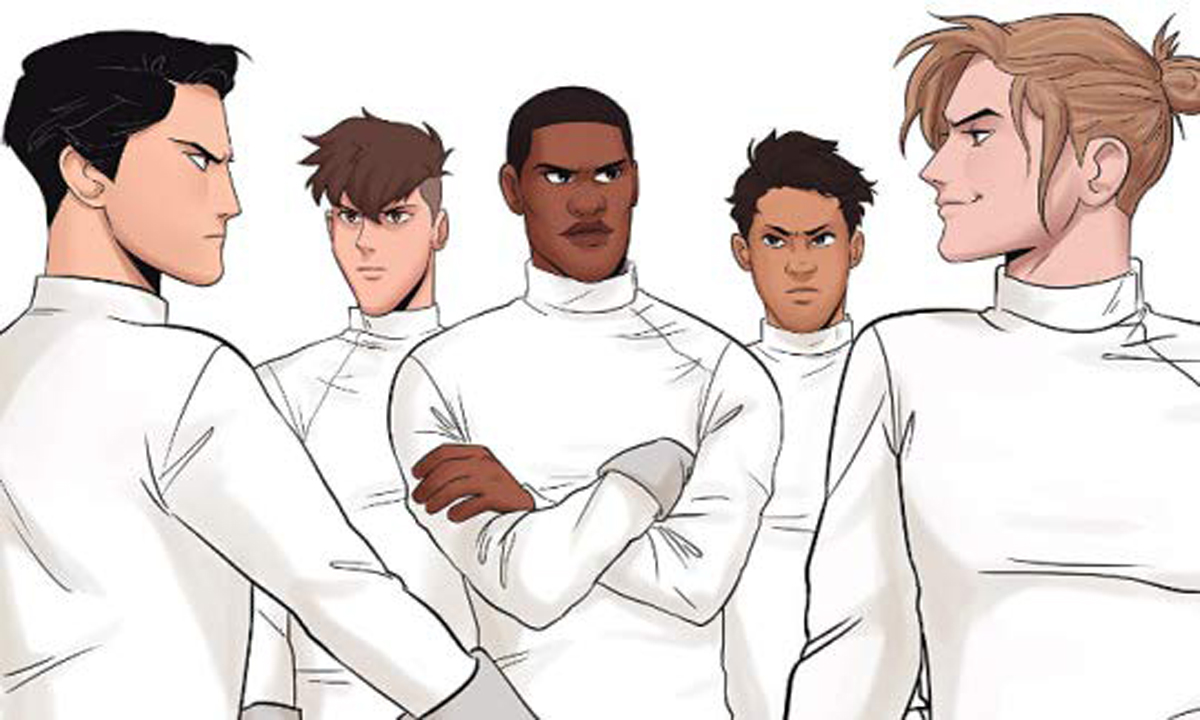 Being a teenager comes with its challenges. Despite how often society disregards teenage problems compared to adult ones, teens have their own burdens to carry. Most of the time these worries are the expectations that others place on them. Whether it’s from parents, school, or even themselves, pressure can have a monumental impact on the teenage psyche. Fence Vol. 2 by C.S. Pacat (writer), Johanna The Mad (illustrator), Joana La Fuente (colorist), and Jim Campbell (letterer) displays this extraordinarily well.

The Plot of Fence Vol. 2

Fence Vol. 2 continues where Vol. 1 left off with the team having tryouts. These tryouts are to decide which fencers will represent the school during the state championship.

After Nicholas’ loss in volume 1, he leaves the tryouts to contemplate whether or not he is right for the school. He realizes that he is not as well-trained as the other students, which hurts his confidence. As Nicholas is the illegitimate child of a world-class fencer, he places high expectations on himself to fence in a manner worthy of his father’s name. However, these tryouts have opened his eyes to the training he’s lacking.

While he is considering leaving the school, his fencing coach appears to have motivated him to continue training. She explains that during tryouts almost no one finishes without at least one loss. This discussion encourages Nicholas to stay in school and do better next time.

Alongside Nicholas’ crisis of confidence, these tryouts surprisingly test Seiji’s resolve as well. The next day, he faces off against an upperclassman, Aiden Kane. At first, Seiji is confident in his ability to defeat him; however, after Aiden agitates Seiji over his loss in the last tournament, Seiji loses.

Rattled and frustrated by his defeat, Seiji leaves the tryouts and berates himself. He clearly has high expectations for himself due to his talent as a fencer. Therefore, the loss takes a major toll on his psyche. However, his budding rivalry with Nicholas motivates him to continue on with tryouts to earn a spot on the team.

As the trials are only going to get tougher from here, will Nicholas and Seiji make the team to state?

The art of Fence Vol. 2 is relatively the same as that in volume 1. Johanna The Mad puts more attention to character design than background illustrations. The backgrounds mostly consist of one-shade panels. However, considering the key focus in Fence Vol. 2 is the characters’ motivations and insecurities, this artistic decision works out for the best.

Johanna The Mad places extra emphasis on her characters’ facial expressions. Her art clearly defines how the characters feel when they do not meet expectations. When Nicholas loses his first match, readers can tell how disappointed he is in himself. He wants his father’s approval so badly that, when he fails to uphold his fencing legacy, he appears lost. The same thing occurs when Seiji loses against Aiden. However, instead of looking depressed, Seiji looks humiliated and enraged by his defeat. Along with their expressions, Johanna The Mad also provides realistic body movements, like how the characters will bend their backs or slump their shoulders to portray their duress.

Joana La Fuente’s coloring only assists in enhancing the emotions expressed within Fence Vol. 2. Usually, the coloring within the Fence series is bright and colorful. This style adds to the cartoony element of the series. However, Joana La Fuente made sure to tone down the bright colors during the introspective moments in the volume. When the characters are in a slump, the colors are darker, emphasizing a mostly gray or blue tone. However, the colors brighten as soon as the characters overcome their insecurities, symbolizing their determination to improve and move forward.

This volume was a very character-centered addition to the Fence series. Where volume 1 focuses more on clichés, fan service, and introducing readers to the world of fencing, Fence Vol. 2 succeeds in rounding out its characters.

In volume 1, Nicholas appears to be a stereotypical rambunctious main character who has something to prove. However, readers see that despite his plucky attitude, he has severe insecurities. Because he is a child of an affair, Nicholas understands how low a concern he is to his father. Robert Coste had barely tried to see his son, and during the moments he did, all he taught him was how to fence. Fencing is the only connection Nicholas has to his father; therefore, he sees succeeding in the sport as a way to connect with his absentee father.

When it comes to Seiji, readers understand that he is a by-the-books kind of character. He practices every day and takes everything seriously. Therefore, his frustrated reaction to his defeat is not surprising. However, regardless of our expectations, his reaction is heartbreaking. Readers can see just how severely Seiji took his defeat against Aiden. His expectations for himself are so high that even the slightest error sends him into a panic. Accordingly, he displays his humiliation and how a loss can send him spiralling.

Rounding Out The Side Characters

Along with developing our two main characters, Fence Vol. 2 also rounds out the side characters. Harvard Lee, the fencing team’s captain, gets the spotlight with his own personal insecurities. Knowing that Seiji is a fencing genius, Harvard portrays how worried he is about losing to an underclassman. He feels that as the team’s captain and Seiji’s upperclassman, there are expectations that he will defeat the team’s new member. Harvard believes he represents all the upperclassmen on the team. Therefore, if he loses to a first-year student, it will reflect badly on the rest of the team.

By portraying this side of the fencing team, Fence Vol. 2 helps illustrate the different types of expectations placed on people. There is the familial type (represented by Nicholas), the expectations set by oneself (Seiji’s dilemma), and the ones set by third parties like teachers or other students (Harvard’s issue). By displaying the characters’ insecurities, Fence Vol. 2 distinguishes itself from other series similar to it.

In raising the personal stakes, Fence Vol. 2 strays from its initial cliché-fan-service persona to a series representative of today, where the expectations placed on youth can be overwhelming.

Fence Vol. 2 is available for purchase at Barnes and Noble and Amazon. For more reviews, visit The Daily Fandom’s Comics section.

Fence Vol. 2 by C.S. Pacat, Johanna The Mad, Joana La Fuente, and Jim Campbell
Fence Vol. 2
Fence Vol. 2 focuses on the internal struggles people go through when attempting to meet expectations. The art emphasizes the emotions the characters emit through their faces and body language, adding realism to the dilemma. Overall, Fence Vol. 2 demonstrates its progression from a provider of clichés and fan service to one of high stakes.
PROS
Character Development
Representation Of Internal Struggles
CONS
Lack Of Background Designs
83
Allez!