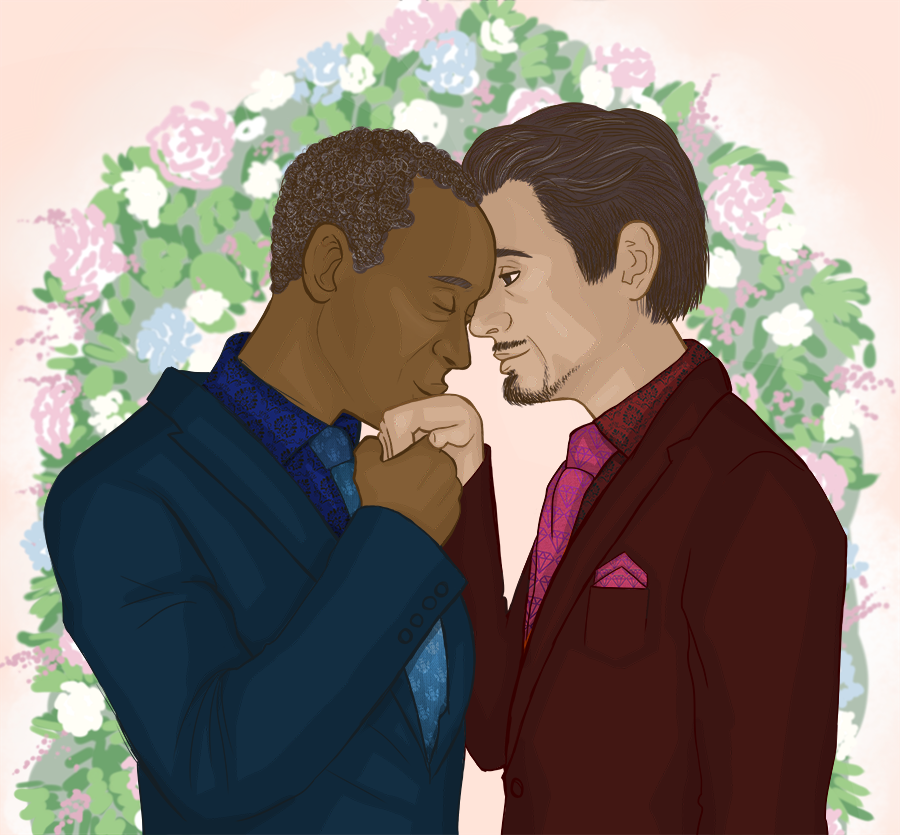 It’s Friday, so you know what that means: It’s Fanfic Friday time, y’all! This month we’re going to be focusing on one of the purest ships within the Marvel Universe: Ironhusbands. For those who aren’t aware, Ironhusbands is a ship that features Tony Stark and James “Rhodey” Rhodes. Unfortunately, Ironhusbands is technically classified as a “rarepair” — a pairing that’s rare in the fandom and has under 2,000 fics on AO3 — but hopefully these ten fanfic recs will inspire others to write more fics for them and boot them out of the rarepair category!

The sweet and pure Ironhusbands. (Fanart Credit to canofbees on Tumblr.)

Summary: Mob Boss James Rhodes (War Machine) sets his sights on Stark Industries, more than ready to expose the corruption of Obadiah Stane. He enlists the help of Tony Stark. It doesn’t take Obadiah Stane very long to catch onto what Tony’s up to and is tragically quick to do something about it.

Rhodes will do whatever it takes to get Tony back and tear Obadiah down in the process.

Summary: A month and a half ago, Rhodey was kidnapped and replaced with a Skrull without anyone noticing. In that time, he and Tony got together. Now though, they know he’s a Skrull, and Tony tries to figure out how to live with what’s happened.

“Does he know about the baby?”

4. i let you carve your name all over my insides

Summary: A warm, hot, heavy palm lands on the curve of his hip and Tony groans into his pillow, clutching at it like a lifeline.

A laugh falls in his ears, tickling the hair on the nape of his neck.

Tony turns towards the side, eyes blinking open with some struggle, only to centre on dark eyes blinking down at him, a smile curling on Rhodey’s lips.

Later on, he’ll deny it to his grave, but he screams, surging up, grappling for Rhodey by the shoulders.

Rhodey laughs. “Things finished up sooner at the base than I thought it would. If you’d rather I come back in two weeks, I could-”

Tony silences him with his mouth, dragging Rhodey down on top of him with a yelp, his duffle bag falling onto the floor with a heavy thump.

5. This Is The Real Life

Summary: It takes doing the laundry for Tony to realize he is completely, irrevocably in love with Rhodey. Who knew that the way to Tony Stark’s heart is to teach him how to wash his clothes.

6. A Little Love For Everybody

Summary: Heavy snowfall makes it impossible for Tony to drive home for Christmas. Instead, he spends it with Rhodey and his family. He is far more welcome here anyway. Now, if only everybody would stop making insinuations about Rhodey and him sharing the bed.

Summary: 5 times rhodey lent tony his dog tags, and 1 time he gave them to tony for good

Summary: “Share your address” by Ben Platt for fresh out of MIT tonyrhodey

9. four weddings and a funeral

“You’re in an alternate universe,” Magic Man said calmly, as if it was the most obvious thing in the world.

The faceplate flipped up.

Tony blinked a few times, considering what Magic Man had said. Logically, it made sense. No Steve Rogers, he only recognized half of the Avengers, they knew Frank Castle as the Punisher, JARVIS wasn’t responding to him, and they had no idea who he was.

Tony Stark lives in a universe without James Rhodes.

James Rhodes lives in a universe without Tony Stark.

A white mist forces Tony into Rhodey’s universe and then rips him away all too soon, and Tony will do whatever it takes to get back to the universe where Rhodey is.

Want To Recommend A Fic?

You wrote a fic and would like it to appear on Fanfic Friday? Or maybe you want to suggest a fic you loved? If so, let us know by leaving a comment down below, tweeting us, sending us an ask on Tumblr, or emailing us