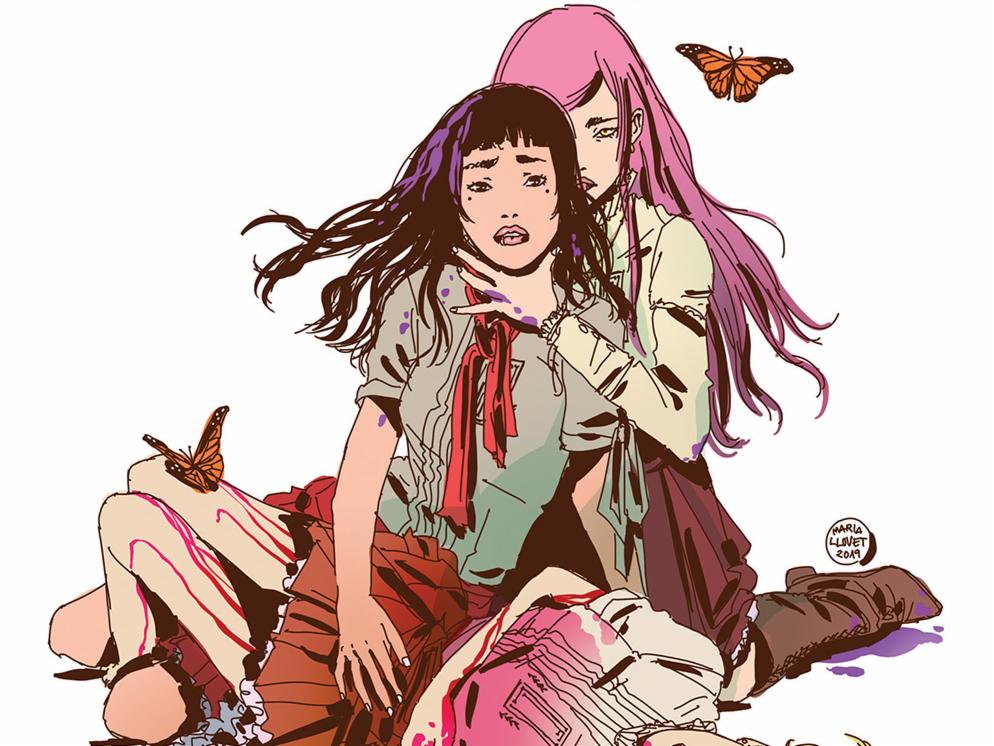 Eva Questions Her Innocence In Heartbeat #2

Following up on the first installment of the series, Heartbeat #2 does a great job of keeping the story rolling. This issue was written and illustrated by Maria Llovet and lettered by AndWorld Design. Llovet does a great job of transitioning the story between issues. After Heartbeat #1 I was incredibly excited to see what would happen with the photograph that the main character, Eva, took. However, Heartbeat #2 doesn’t address this right away.

The issue opens with an announcement from the higher-ups in the school. They make a statement about the death of Amber, and how they will investigate what happened. This makes Eva seemingly uncomfortable, and we’re left wondering if she’s going to turn in the photograph or not.

As the story progresses, we see Eva struggling with her own sense of innocence. As a reader, we saw that she didn’t take any part in the murder of Amber. Does having a picture of what happened to make her equally as guilty as Amber’s actual murderer, Donatien. Where is the line between being afraid to come forward, and making things worse? For Eva, she’s long crossed it. If she wanted to remain innocent in all of this, her photo would have already been in the hands of the investigators.

Darkness Will Consume You

Eva’s chance at innocence is pushed even further away when her obsession with dark tendencies becomes clear. There were hints toward this in the first issue, but Heartbeat #2 definitely marks Eva as twisted. In the last issue, I felt that there was an absence of horror. There wasn’t anything to be afraid of or worried about. The murder at the end was a light of hope for the horror landscape of the series.

From the first page of Heartbeat #2, it was clear that it was taking the right step in the direction of horror. Eva’s descent into darkness is easily the eeriest thing about this issue. From the beginning, we see her struggle with whether or not she wants to say about the photo, but from there she spirals. The narration almost reads like her subconscious is. the one speaking, saying things she wants but would never say out loud.

She thinks about the taste of blood, and even starts to make a facebook post about how Amber “isn’t anything anymore.” Before posting, she changes it to tell the world that she’s had a great day. Not only is that a weird thing for someone to post the day a murder investigation starts, but it’s a great way of showing that Eva puts on a face for the rest of the world.

What Do We Learn About Donatien In Heartbeat #2?

The short answer? Not much. He’s still an incredibly vague character. We don’t get to see a lot of his personality in this issue, but we do see more than in #1. Donatien was seen with a bloodied Amber in the last issue, and we’re pretty certain that he committed the crime. In one scene, he offers Amber’s brother Mack some sympathy. However, it’s clearly just your run of the mill, “I’m sorry for your loss.” Donatien doesn’t care about Amber’s death in the slightest. His sympathy is dry and forced, giving us the vibe that he’s pretty detached from what he’s done.

In the end, when the horror really begins to kick in, Eva goes to a blood drive and steals a bag of blood. She starts to drink in the hallway and spits it out. Donatien appears, almost as he knew she was going to be there, or was following her, and shows her the correct way to drink blood. He consumes some of it and then kisses her. The blood drips from both of their mouths in a grotesque and truly horrifying panel.

Should You Read Heartbeat #2?

Llovet clearly knows what she’s doing when it comes to the art here. The colors set a very specific dreary tone for the issue that fits incredibly well with the storytelling that’s happening alongside it. The story and art are crafted in such a way that makes them seem inseparable. It’s a perfect combination, and I couldn’t picture any other art style with the story. The way this story is going, I know it’s going to become something that I can’t put down. Each issue ends and I find myself dreading waiting for the next to come out. If you’re into strange horror, you would really like this. It definitely isn’t your typical scary story, but it will make your skin crawl.