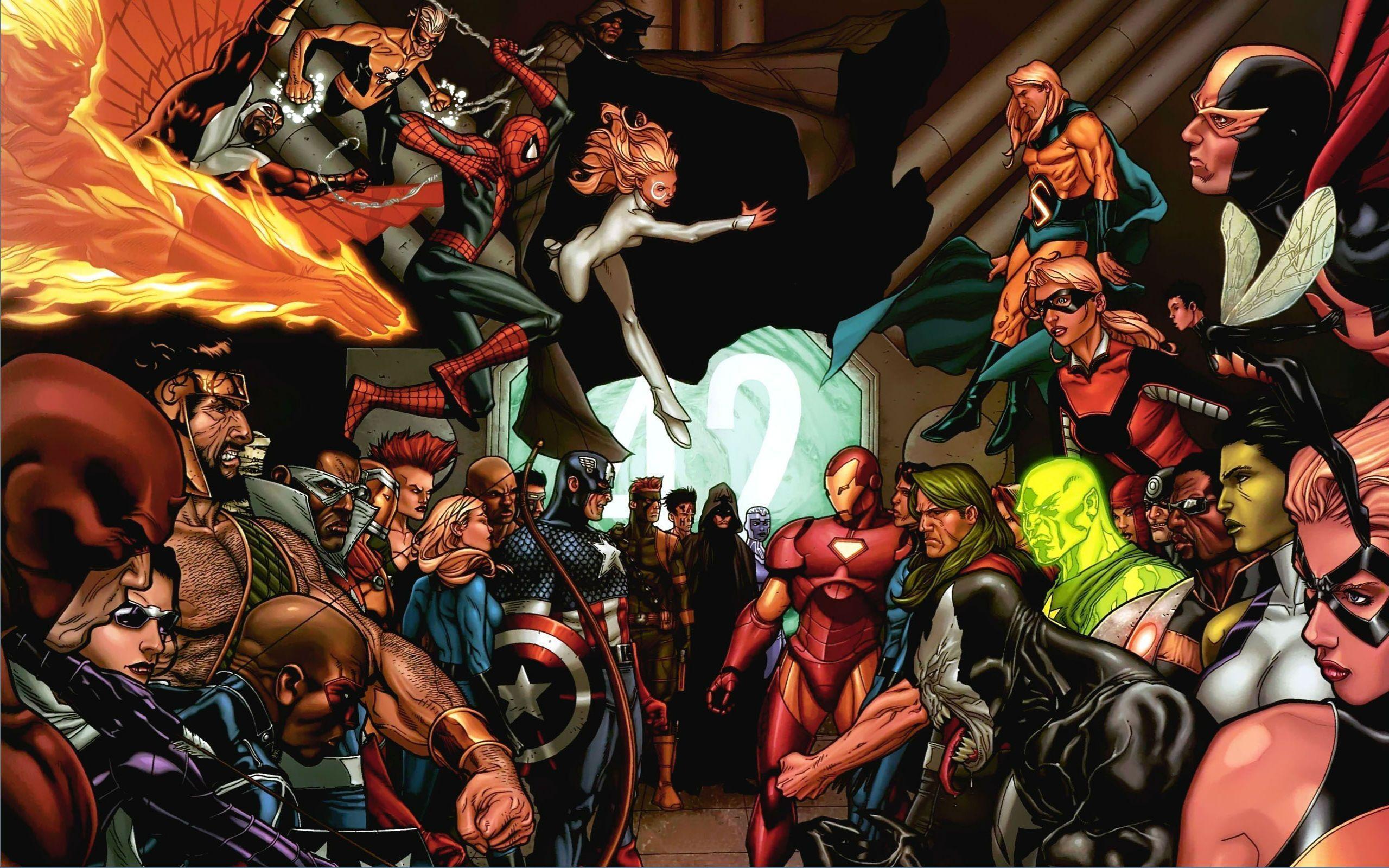 In September of 1963, Stan Lee and Jack Kirby brought together a group of incredible heroes to form the team we now know as the Avengers, Earth’s mightiest heroes. Since that iconic moment, Marvel Comics has never looked back. For decades, the Avengers have saved the Earth from the grasp of evil countless times. No matter what characters fill the team, they are always there for the people of Earth when they need them most.

The creation of the Avengers didn’t just change the comic game, it created an empire in the pop culture scene. From video games to TV shows to the current MCU we’re all familiar with. With over 50 years worth of stories to draw from, the number of possibilities is endless for these icons of pop culture.

Follow along as we continue our Essential Reading Series. This list is for people new to comics and interested in reading some classic stories. Or maybe you need a break from all that Avengers: Endgame hype (if that’s possible) and you just want to read some comics. There are tons of great comics that didn’t make this list, so feel free to comment on your favorite issue below. Without further ado, here’s our list of 8 must-read Avengers comics.

This is the story that started it all. It’s the origin of how the different heroes came together to form a team. With the success of The Fantastic Four and The Justice League, Marvel wanted to create another team-centric book. In their first adventure, the team goes up against the mischievous Loki. Loki frames the Hulk in order to get his revenge on his brother, Thor. Unfortunately for Loki, he gets the attention of a few heroes more than just his brother.

Though this book isn’t an action-packed thriller, it is exciting to see the initial formation of the team. This book has great historical significance in Marvel comics history. It is a must-read for anyone who wants to read up on Earth’s mightiest heroes.

When Ultron wipes out the entire population of the small nation of Slorenia, the Avengers, Earth’s mightiest heroes, have to do whatever it takes to put an end to his madness. That task, however, proves easier said than done. In what is some of Kurt Busiek’s best work on the title, we see Ultron in his most powerful state ever. Now made completely out of Adamantium, he is virtually unstoppable.

An interesting aspect that Busiek and artist George Perez touch on is Ultron’s unique relationship with some members of the team – particularly Vision and Scarlet Witch. The team was forced to go up against an army of Ultron bots. Fans of the MCU will draw a lot of comparisons to Avengers: Age Of Ultron from this story. As one of the most difficult challenges of the Avengers’ 50 plus years of stories, this arc is without question an essential read.

Kang the Conqueror, a time-traveling warlord from the future with the goal of taking over the Earth, has arrived in the present day. With the ability to travel through time and alter history for its benefit, Kang presents a daunting task for Earth’s mightiest heroes. Unlike past villains, Kang succeeds in his task for a brief period of time.

Not only is this story arc an incredible 14 issues, but it is also full of epic moments, as well as some tragic ones. Arguably the moment the story is best known for is the complete destruction of Washington D.C. Kang Dynasty is another milestone moment in Kurt Busiek’s run of The Avengers title. With artists Alan Davis, Kieron Dwyer, Ivan Reis, and Manuel Garcia, this story was as epic to look at as it was to read.

The Civil War story is one of the most fascinating stories Marvel has ever done. It raises the question of what would happen if our favorite heroes had to register with the law to continue their time as heroes. After a reckless group of young heroes caused a devastating tragedy, many wondered if heroes should have to be licensed and work with the government. With the requirement to give up their secret identity, the answer was not as clear as one would presume. In this story, we find our heroes not in a battle against a cosmic villain, or an army of robots, but against each other.

Captain America leads a group of heroes who refuse to reveal their identities against those who agree to work with the government, led by Iron Man. One of my favorite story lines to follow in Civil War is that of the events that take place around Spider-Man. Spidey, who originally sides with Iron Man, does the unthinkable and reveals himself as Peter Parker to the world. With the overwhelming attention this draws on him and his family, plus the tragic events that take place in the battles between the teams, Spidey trades sides to join Cap.

Mark Millar and Steve McNiven bring us one of the most iconic and well-known stories Marvel comics has seen to this day. If you’re a fan of Marvel superheroes, this story is definitely worth checking out.

I believe most people are now familiar with this story due to its influence on the Marvel films Avengers: Infinity War and Avengers: Endgame. In the lead up to this six-issue cross over event, you can follow Thanos on his quest to retrieve six infinity gems. Once Thanos has acquired all six gems, his power is unstoppable. While holding all of the gems, Thanos becomes a god, giving the Avengers, Earth’s mightiest heroes, no hope of defeating him.

In order to win the heart of Mistress Death, Thanos wipes out half the living beings in the universe. Adam Warlock takes the remaining Avengers to engage Thanos in battle in hopes of reversing what Thanos has done to bring back their friends. Artists George Perez and Ron Lim delivered some of the most stunning books in the history of Marvel Comics. This story has been referenced many times since it was published and is one of the most well-known stories in comics. If you are interested in reading up on the origins of the newest Avengers movie, stop what you’re doing and read The Infinity Gauntlet.

Brian Michael Bendis’ New Avengers introduces readers to a new team. This team is led by Captain America and includes members like Spider-Man, Spider-Woman, Jessica Jones, and Wolverine, none of whom had ever been members of the team before. The New Avengers title helped boost the popularity of the team in a huge way. It presented a new, more diverse team of heroes. In the opening storyline, Breakout, the team attempts to contain a breakout on Ryker’s Island.

The team goes up against a super human known as Sentry. Sentry’s power was designed to be a hundred thousand times stronger than the super serum used in Captain America. Sentry, though, has a dark alter ego known as Void. Void has the goal to fill the world with darkness. Only the Avengers can stop Void and save the planet. The New Avengers was the beginning of a new era for the Marvel team of heroes.

The war between Kree and Skrull was an event that helped pave the way for comic companies to have large crossover events. The events of the story are exactly what the title says. Two major civilizations in the Marvel Universe face off in a massive war against each other. Of course, it wouldn’t be a Marvel story if Earth wasn’t in danger and the Avengers weren’t in the middle of the action.

The Kree-Skrull War was a huge event for one member of our Marvel heroes in particular. Captain Marvel plays a huge role in this story and helps the Avengers save the planet from destruction. This story has massive ramifications for the Marvel Universe and has been referenced in comics that have followed ever since. It’s also worth mentioning that Neal Adams as the artist on this book makes it a must-read all on its own.

Marvel Comics launched The Ultimates in 2002. They launched it with the intention of giving the team a more realistic tone that mirrored the real world at the time. After the Hulk goes on a rampage killing hundreds, the public opinion of the team is worse than ever. Then, when Thor is accused of being an escaped mental patient thanks to Loki, the public opinion only gets worse.

Loki doesn’t stop there though. He also creates a new team called the Liberators. With the help of Asgardian soldiers, the Ultimates battle Loki and the Liberators and stand victorious. Mark Millar and Bryan Hitch come together to bring us a whole new modern take on the characters. The Ultimates stories may be the closest thing you can get to an MCU film in a comic book, which makes it worth the read.

The Avengers, Earth’s mightiest heroes, have been at the center of the comic universe for decades now. With the help of the MCU movies, almost every member is now a household name, from Iron Man to Ant-Man. Their stories are full of epic battles that shake the universe, endless drama, and tragedy that can make even the strongest person crack. Sure, these heroes aren’t perfect, but do you want them to be? What fun is reading a story about perfect beings who never fail? The most appealing attribute to any hero is the mistakes they make. They make mistakes just like the rest of us, but they overcome those mistakes and help inspire readers to do the same.

There are plenty of Avengers stories to choose from. We just listed some of our favorites here for you. If you’re like some of us and have now seen Avengers: Endgame more times than you’d like to share but still want more, then give these stories a read. There are stories for everyone when it comes to the Avengers. If you have a favorite character in the Marvel comics, there’s a good chance they’ve made it to the team at some point.