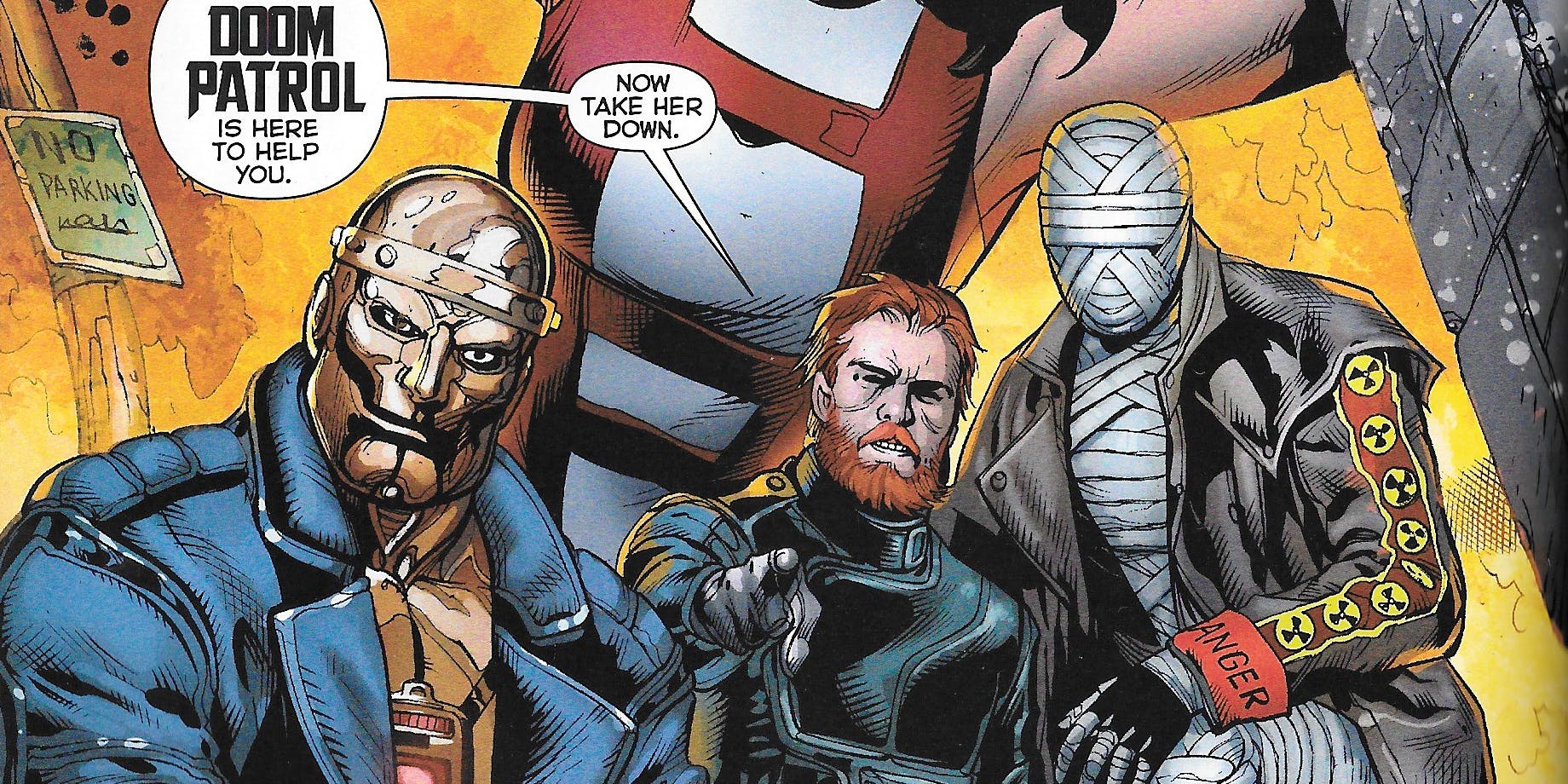 Doom Patrol is a group of misfits and freaks who have been pushed away from the rest of the world. This is no new concept. Not even when they first appeared in 1980. However, something that separates this group of outliers from the rest is that this bunch helps protect the world from some of its most curious threats. This interesting group is made up of a robot that is controlled by a human brain, a woman who can alter the size of her body, and a living mummy.

All are led by a man who goes by the name “chief;” a mad scientist who took three people and destroyed their lives. Creating “accidents” to take in the people whose lives he had destroyed, and turn them into a team to take on threats against the planet. With the live-action Doom Patrol series due for release February 15th on DC UNIVERSE, now is a good time to catch up on these remarkable characters. Whether you’re new to them or a longtime fan, Doom plenty of fun and quirky stories to read. We continue our “Essential Reading Series” here at The Daily Fandom with five must-read Doom Patrol stories.

This is the issue that brought our team together for the first time. Chief introduces the three heroes to each other and to the readers. Getting small origin stories for each character, and their tragic accidents that lead them to become the founding members of the group that would become known as Doom Patrol. When an alien spacecraft crashes on Earth, Chief sends the team on their first mission. Robotman, -Girl, and Negative M head to the ship to recover a secret weapon.

The newly assembled teammates aren’t the only ones after the weapon, though. General Immortus — an old enemy of The Chief — is also after it. During a battle between the two, the alien ship explodes, with all signs pointing to General Immortus dying in the blast. ‘My Greatest Adventure‘ comics would continue for a few more issues until issue when it was retitled to Doom Patrol. The team would contnue to have multiple runs and volumes for years to come.

After the first volume of Doom Patrol came to an end, the team was barely touched for almost twenty years. It wasn’t until 1987 when the team and book were brought back to the shelves. Paul Kupperberg became the writer of Vol. 2 and wrote the first eighteen issues. While there was nothing wrong with this stretch, there wasn’t anything very special about it either. That was until the issue #19 when Grant Morrison took over the job.

Like most of his work, Morrison brought a glorious weirdness to the team and the stories. Grant Morrison’s run is easily considered the best run in the series. In this story, the team is rebuilding themselves. With Robotman, Chief, and a new member by the name of Crazy Jane all in the loop. Crazy Jane, who has 64 different personalities, all of whom have their own power.

The team takes on a group called the Scissormen. It’s a race from another reality with scissors as hands, and the ability to literally cut people from reality. This fun, quirky storyline would be a preview of what Morrison’s run would be like. With the start of the world’s strangest hero’s best run, this first story arc is a must read.

In 2009, Doom Patrol got its fifth volume. Keith Giffen came on as the writer and brought back the original line-up. After quite a few unsuccessful attempts to bring the team back, Giffen finally saw success. The first few issues of this run took place during the Blackest Night storyline. The team went up against some of their former deceased members and the Black Lantern Corps.

With art by Matthew Clark, this run is just that much better. There are not many noble runs on Doom Patrol, yet Keith Giffen’s is one of the best. Making it a must-read for anyone who is looking to get into the characters. Giffen adds a bit more humor to his storylines, which was a happy change from previous runs.

When the first volume of the book was coming to a close due to decreasing sales, the series ended in a shocking way. Instead of sending the heroes off into the sunset, the team of super freaks sent to their graves. The team found themselves in a battle between Madame Rouge and General Zahl, during which they were presented with a massive decision to make. General Zahl informs the team that he has placed a bomb in a small village in Maine, ready to turn it into ash. He also had a bomb on the island where the Doom Patrol was located. Giving them the choice of which bomb he will detonate, in full belief they would choose to save their own lives.

In a shock to Zahl, the Doom Patrol chose to save the people of a small town in Maine and to annihilate themselves. Zahl detonates the bomb, killing our heroes for the foreseeable future. In what would be one of the most heroic deaths in comics, the Doom Patrol were sent off as true superheroes. Despite being a dark ending to the series, it is satisfying to see a group of outliers and people considered freaks put aside their differences from the rest of the world and make the decision most heroes would. Grant Morrison’s run is considered the best run for these characters, but Volume 1 is right up there alongside it. Being the run that introduced these characters, and it was the start of an era, it was sad to see it end.

The issue is an absolute must-read for all Doom Patrol fans.

This is a story arc that is much different than anything else on the list. The story revolves around Beast Boy (then known as Changeling) and Robotman. It took place after the first volume of Doom Patrol ended and the death of the team. Gar, Robotman, and the Titans take on the killers of the Doom Patrol in search of vengeance. With Marv Wolfman and George Perez on the book, this is already an intriguing read. With their entire run on Teen Titans, known for being the best ever, a story involving the Doom Patrol made for an epic tale.

When the other Titans get captured and placed into a “devolving pit,” Gar and Robotman work together with the Brotherhood of Evil to help rescue them. In an ensuing battle between Madame Rouge and General Zahl (the killers of Doom Patrol), Robotman and the Titans proved victorious. The Titans and Robotman avenged the deceased Doom Patrol with the deaths of Madame Rouge and General Zahl. Marv Wolfman and George Perez’s run on Teen Titans was historic and a must-read for itself. Add a story involving the Doom Patrol, and it was a no-brainer to add to our list.

The Doom Patrol is not your ordinary group of heroes. They’re certainly not the Justice League, but they are a much more grounded and strange team that makes for a unique and entertaining book. Unlike the Justice League, who are viewed almost as Gods, the Doom Patrol is a group of people that were separated from the rest of the world and the lives they had previously. Now is the perfect time to start catching up and learning about these awesome characters. Their own live-action series is due to be released on February 15th, 2019.

The first two volumes of Doom Patrol are without question recommended for anyone looking to read some of these character story arcs. Full of quirky characters taking on some of the planet’s strangest threats. Doom Patrol is a book that is a refreshingly different take on superheroes that strays away from the rest of the DCU. DC heroes at the time the Doom Patrol was created had that feeling of being larger than life.

The Doom Patrol could be a bit more relatable to people. Being outsiders, and a feeling of being left out of the rest of the world is a very real issue that many people deal with. These are our choices for essential Doom Patrol books for everyone to read. If you’re looking to read up on some Doom Patrol before the new show premieres, check out these books. Feel free to leave a comment below and let us know some of your favorite Doom Patrol stories.