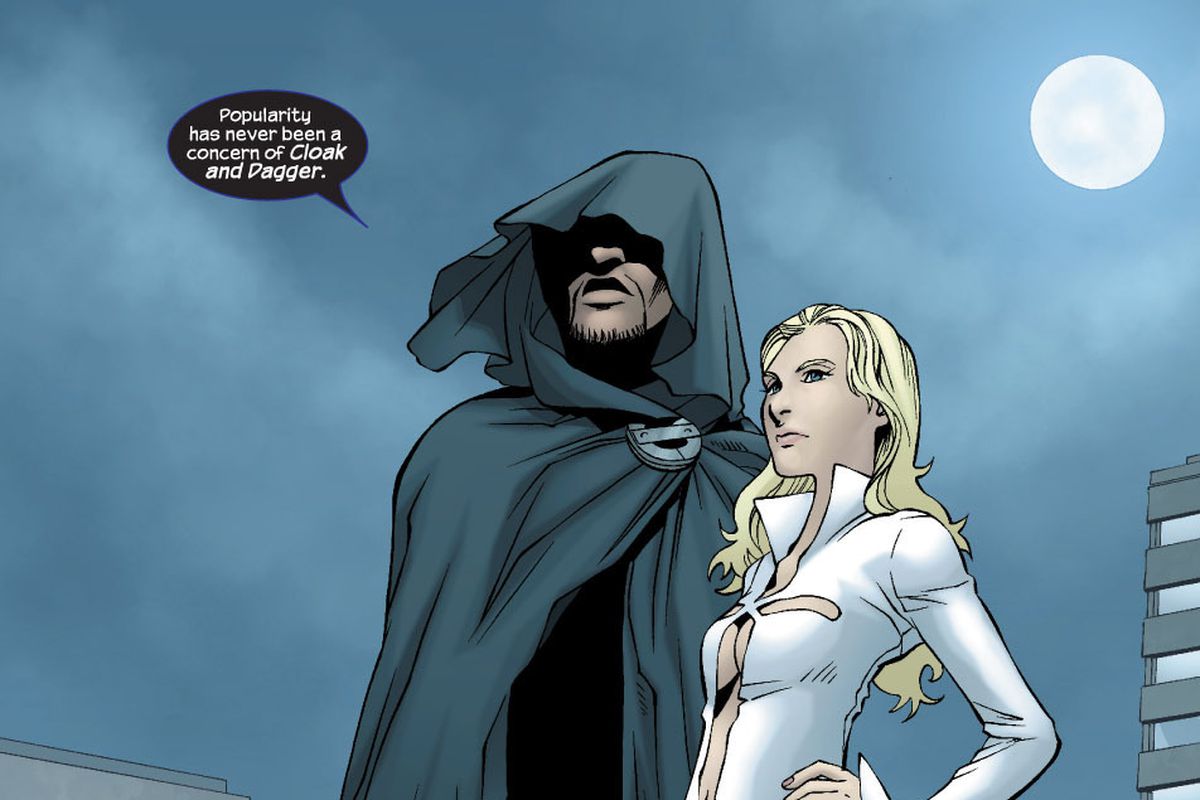 Tyrone Johnson and Tandy Bowen are two runaway teenagers who both come from troubled pasts. Tyrone, a young teen from Boston, witnessed the wrongful murder of his friend at the hands of the police. Tandy, on the other hand, was neglected throughout her childhood. She was neglected by her millionaire supermodel mom who had no time to spend with Tandy. Little did they know their troubled pasts would lead them to become the heroes you may know as Cloak and Dagger.

The two found themselves in New York when they first met. They became friends quite fast. One night Tandy was tricked by some men who were looking for homeless runaway teens. Tyrone attempted to save her, but the two were captured and brought to a man named Simon Marshall.

Marshall was creating a new type of heroin for Silvermane. Marshall experimented on young runaway teens, all leading to fatal results. For Tyrone and Tandy, though, the drugs had different results. They each gained to create the heroic duo known as Cloak and Dagger.

The two would go on to fight the war on drugs. On their journey, they would have run-ins with other Marvel heroes such as Spider-Man and the X-Men. With season 1 of their own Freeform series in the books, it now felt like a good time to take a look at some of their best stories.

Here are 5 Cloak and Dagger stories for new readers.

Bill Mantlo and Ed Hannigan introduce us to the young heroes for the first time in what is a bit of a dark story. Firstly, if you are going to introduce new characters in a comic, there is no better hero to use than Spider-Man.

We find the patrolling the city when he stumbles upon a man screaming for help. When Spidey goes to help the man he is met by Cloak and Dagger. The three engage in a fight that ends poorly for Spider-Man.

Later in the story, we Find Cloak and Dagger holding multiple men captive. Turns out, these men were all part of the group of men who helped drug them leading to them their powers. Tyrone and Tandy have begun a mission to take out the criminals experimented on them. Making sure no other teens would suffer the same fate.

Bill Mantlo is at it again. This time, teamed up with artist Rick Leonardi. The two give us a better understanding of how Cloak and Daggers powers work. Not only that but also how their powers affect one another.

While Cloak and Dagger attempt to help a couple in trouble, they’re techniques prove costly. One of the civilians is caught in the losing their life. The tragedy forces Tyrone and Tandy to change how they work. Bringing criminals to justice rather than bringing them to their graves.

The creative team also gives us an issue where they dive into the characters past. Creating an origin for both characters, and explaining how they met.

In this short 2 issue story, Bill Mantlo and Brett Blevins create a more personal tale for Cloak and Dagger. When the two discover Tandy’s father, who left her and her mother early in her childhood. Tandy’s father refers to himself as the ‘lord of light.’

Tandy, blinded by the joy of seeing her father, is unable to see him for the evil he has become. Whereas Tyrone is well aware of her fathers intentions. Tyrone must attempt to not only convince Tandy the truth of her father, but also work much throughout the series with his powers taken from him.

Dan Slott and Matteo Buffagni team up to give us a story that shows quite an interesting take on Cloak and Dagger. Tyrone and Tandy have been out under the control of Mr. Negative, aiding him in the spreading and creating his new drug. Not only that. but the two have reversed roles. Cloak now has the power light, where Dagger has the power darkness.

This presents an interesting contradiction. Tyrone and Tandy have spent their careers as supers fighting the war on crime. Now they are forced to aid the cause they have fought so hard against. It is also unique to see Dagger wielding the power of darkness, and Cloak the power light for a change.

Bill Mantlo and Rick Leonardi pair up again to give us a bit more depth on how Cloaks powers work. Tyrone and Tandy continue to take down small gangs involved in the illegal drug market. Though, Dagger seems to be missing her old normal life more and more.

Tyrone continues to remind her that their mission is to prevent what happened to them from happening to any other young teen. We get a better look at how Cloaks powers work and how dark it truly is. Tyrone loses control of himself and attacks a bunch of innocent people in a church.

Consuming them in his cloak making them bear witness to the darkness. Tandy becomes horrified what she has seen from Cloak and leaves him. Cloak immediately realizes the evil he has committed and looks to set things right.

Light In The Darkness

Cloak and Dagger are two characters that have been through incredible pain. Whether its loss, racism, drugs, or abandonment. They end up getting these amazing powers. Kids who have grown up with the troubles they have, then all of a sudden gaining these powers has supervillain origin written all over it.

Tyrone and Tandy use the gifts they are given to fight the evil that created them. Cloak and Dagger are an inspirational duo for anyone one that suffers from loss, drugs, etc. These amazing characters can be used as great examples. No matter how difficult life gets, you can always persevere.

Well, what are you waiting for? Go check out these amazing books and watch Season 1 of Cloak and Dagger on Freeform.