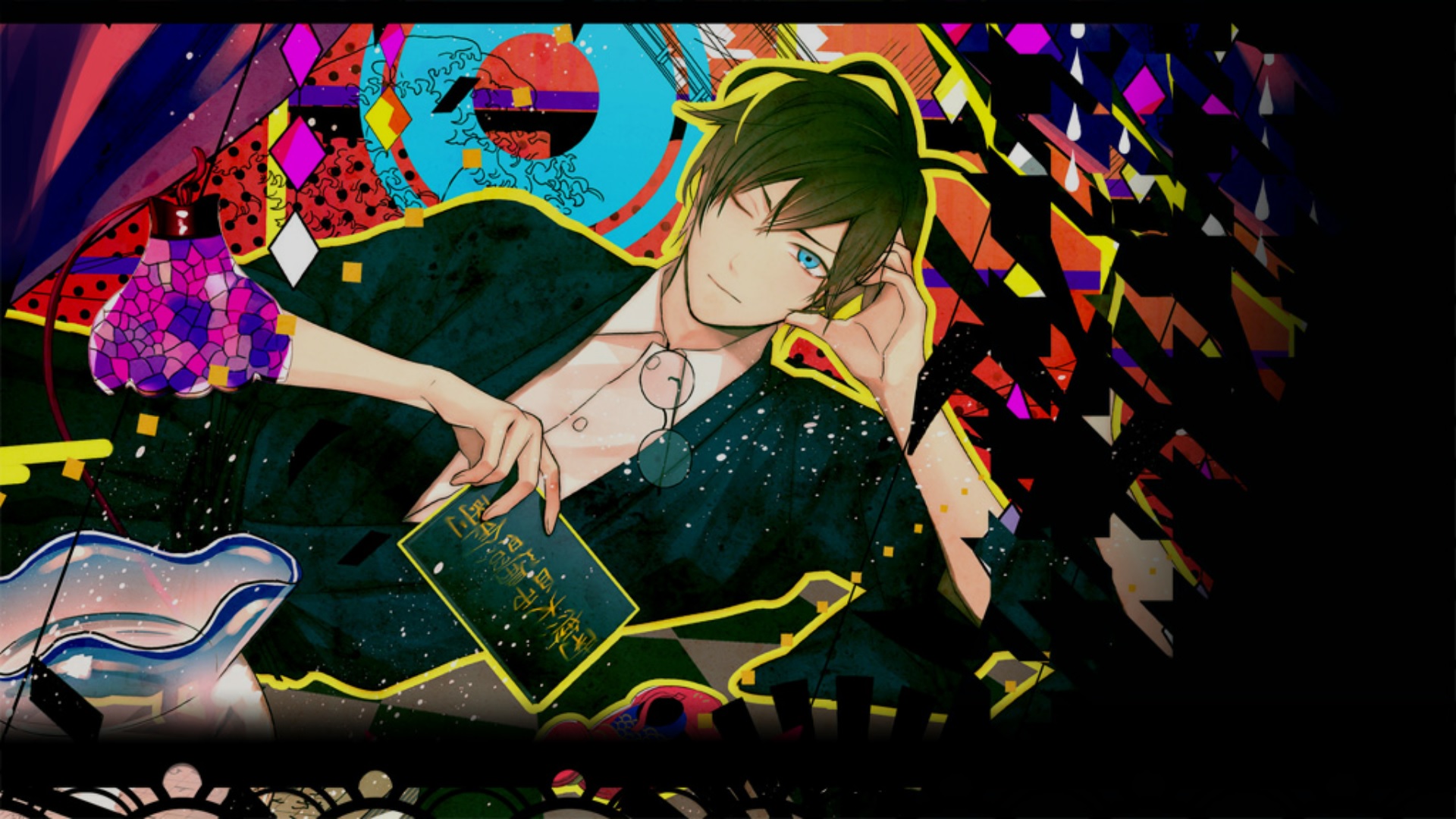 Escapism In Hashihime Of The Old Book Town

There aren’t many visual novels that make it to an American publication. And, when they do, rarely do these games cover characters of the LGBTQ community. Hashihime Of The Old Book Town (2016) is one of the few BL games from Japan that’s published by MangaGamer. For those new to the genre, “BL (Boys Love)” is a category of homoerotic love stories, where sex between the characters isn’t a major focus of the story. Hashihime offers players a drastic outlook on how escapism can affect the average life of a person. Especially if they’re someone who frequently deals with instances of regret or depression.

Warning: This article contains spoilers as I’m analyzing the main character’s behavior throughout the game. This article also contains a generalized view on mental health issues based on how the game portrays them. This is not an accurate representation of how these problems occur in real life. So leave now, if you feel uncomfortable reading about the topic, or if you want to play the game with fresh eyes.

In the year is 1922, the Taisho era of Japan, Tamamori was an aspiring writer preparing to retake the entrance exams at Imperial University. Having failed his exams the previous year, the protagonist is mocked by the community as a rōninsei and is stuck working at a second-hand bookshop. There he watches all his childhood friends succeed before him. However, this changes one day, when he starts experiencing a series of tragic events. Through these events, Tamamori learns that none of his friends are what they seem. When one of his friends misses an important meet-up one day, Tamamori discovers that his friend, Minakami, has hung himself on a nearby bridge.

Refusing to believe that someone with a bright future would commit suicide, Tamamori assumes that his friend was killed by the Man in the Noh Mask. The Man’s a local urban legend that the protagonist encounters shortly after his friend’s death. Upon escaping the deadly encounter, Tamamori falls into a puddle and finds himself sent back three days prior. He learns that a spirit known as Hashihime has “possessed” him. And, so long as his eyes remain “blue,” he has the power to jump back in time whenever he interacts with water. Thus, he uses his new power to investigate his friend’s death and stop it from happening.

Escapism, for the most part, is living with the ongoing denial of what’s present before you. The person indulges in multiple “fantasies” trying to ignore the unpleasant life around them. What I love about this game is that you gradually learn how unreliable the protagonist is as a narrator. Nothing the protagonist believes in this game is real. His childhood idol turned out to be a jerk.

His “best friend” turns out to be a completely heartless person. (Someone who, he later realizes, he only puts up with to avoid feeling alone). And the only “real” friend he has in the world, is someone who turns out to be a complete liar. The player only spectates Tamamori on his journey to acknowledging the “truth” about his friends and reality.

The Tragic Life Of The Protagonist

Tamamori is one of the best characters I’ve seen in a visual novel. He knows he’s not a morally good person. He’s human and owns it. Growing up from a poor background, he hates spending more than necessary and loves getting free things from others; even if they’re only given to him out of pity or sheer annoyance. He takes whatever form of attention he can get. What’s more important is that he’s semi-aware that he’s living in a lie he’s constructed for himself. He just refuses to accept it.

The protagonist has low self-esteem so he puts up with his friends’ abuse to avoid being alone. He does this to a fault as he turns a blind eye whenever their actions become controversial. He deludes himself into thinking that he’s being a “good” friend by doing this. There’s even a point in the game where he let an innocent person die to preserve his friendship with them.

However, Tamamori eventually learns that none of his “friends” care about him the same way. When he finds out that Minakami has hanged himself, he refuses to acknowledge the death as a suicide and futilely investigates it. He adamantly believes that someone murdered Minakami because he can’t accept the fact that his only real friend doesn’t consider him worth living for. He turned his life into a rose-colored world to escape reality.

While his condition is never clearly explained in the story, the game implies that the protagonist deals with schizophrenia. Tamamori is prone to hallucinate from time to time, depending on how stressful or dull he finds his current situation. The severity of his hallucinations, for the most part, varies based on his inspiration as a writer. This results in him spawning a number of imaginary friends whenever he’s drafting through his creative stories. This ability also allows him to alter “reality” before his eyes.

Tamamori’s mystical “Hashihime” abilities are the main example of this. Due to the tragic circumstances surrounding his childhood, the protagonist spends the entire game convincing himself that he’s a host for the spirit known as “Hashihime.” The game defines Hashihime as a female water spirit who “possesses” someone she likes. And, in return for their “possession,” she grants the host the ability to travel through time and reality with a touch of water. This ability allows Tamamori to change any events from happening whenever he’s unhappy with the outcomes of his narrative. The protagonist uses this ability to save his friends whenever something dangerous threatens the world he’s made.

One of the biggest twists in this game is revealed when unlocking the “fifth chapter.” Upon entering this route, the player discovers that none of the people or events in the game are real. They’re all “stories” that Tamamori drafted in his head to combat his increasing sense of loneliness. His actual self is actually ten years older than the character we’ve come to know. The “childhood friends” he came to the capital with are actually dead in real life. He’s been imagining them throughout the entire game. They’re figures he’s created based on the personalities of famous philosophers and writers, using the faces of people he’s encountered.

It’s at this point that the player realizes, it’s not just the characters in his stories that he hallucinates but it’s also the world around him. The reason why his friends are so horrible to him and die gruesome deaths is because his brain is combating the fact that they aren’t real. He puts up with their abuse to avoid acknowledging the fact that he’s alone in the world. The only real thing in his life is the Man in the Noh Mask. His lover, who he villainizes as a “murderer” during his hallucinated episodes because the man’s presence brings him back to reality. Every time he uses his ability “travels” back a few days, he’s just digging himself deeper into his mind.

How Escapism Links To Depression

While this game is a work of fiction, it’s important to note that escapism often serves as a coping mechanism for many to escape their problems. We resort to this when when we find life too overwhelming to handle; such as moments when we experience grief or stress. This behavior commonly appears among those who’ve encountered trauma in their life. (Such as those who’ve witnessed the death of a family member or friend). Escapism helps people cope with the negative or stressful environment around them.

Why Escapism Isn’t A Solution

Despite having a selection of friends made for him, Tamamori acknowledges that he feels alone around them. And no matter how hard he tries to rectify the situation with them, he can never fix his problems outside the aid of time-travel. As we find out in the last unlocked chapter of the story, this all happens because none of his childhood friends actually exist in the world. They all died (presumably murdered) before he went to the city to study. He’s been hallucinating them for the past few years to keep himself from falling into loneliness.

Tamamori’s hallucinations aren’t a cure to his depressing situation. None of his connections with his imaginary friends feel “real” to him. The main character is using them as placebos to ease his pain from the real world. He’s spent ten years putting off reality so he doesn’t have to face the world alone. However, reality is not as bleak as he believes. If he were to focus more on his present life, he would realize that he now has someone (the Man in the Noh Mask) waiting for him in the real world.

Why It’s Important To Move On

Tamamori’s past is no doubt a painful part of his life for him to spend years fantasizing about the alternatives. However, his actions aren’t mindful. He isn’t living in the present but is instead avoiding it entirely. His regrets now dominate his life as he completely neglects his present surroundings. If he focuses more on his situation, he’ll realize that there are people waiting for him in the real world. He just needs to give them a chance; no matter how little or imperfect they seem.

While it’s normal to experience escapism on occasion, it’s unhealthy for anyone to rely on this behavior long term. Escapism isn’t a permanent solution to handling unhappy circumstances. The behavior doesn’t fix our problems for us but instead pushes them aside. Escapism is a temporary distraction meant to help us recuperate from overwhelming situations. This is especially true for when we’re dealing with heavy emotions such as regret. Escapism only delays our problems until we handle them on our own. We still have to face our problems, otherwise, they’ll never go away.

Is This Visual Novel Worth It?

Hashihime Of The Old Book Town is a great visual novel to play in your spare time. While the explicit love scenes in the game seem unnecessary at times, the main story is compelling to read through. Hashihime is a perfect blend of romance, horror, mystery, and science fiction. It’s important to note, though, that this game doesn’t function like a traditional visual novel. You aren’t given any “choices” right away. Instead, you have to unlock them at the end of each playthrough. This means that you have to replay the game a few times for full completion. There are a total of five “chapters” to unlock in this game and each of them leads the player to a character with different romantic outcomes. You won’t love all the characters available in this game but, you’ll definitely grow attached to some of them.

I won’t lie, the story gets mildly depressing at times. This visual novel makes players work for their happy ending. But, regardless, I recommend this game to those interested. I think the story’s worth the emotional experience. Keep in mind though, the story is long. There is a lot of heavy reading involved. If you’re someone who hates reading through long passages of text, you won’t like this game. But, fret not, there’s always plenty of other LGBTQ stories out there for you to discover.

Make no mistake, this is an adult game. There are dark depictions of murder and suicide involved in this story. There are also moments of uncensored sex and nudity. So if you aren’t comfortable with reading about either of these things, this isn’t the game for you.

If you don’t care and you want to play the game anyway, just know that these events do exist. They show up frequently during each route. The sex scenes, however, don’t appear until the end of each character’s chapter. You can speed through them if you want since they’re non-essential additions to the main story.