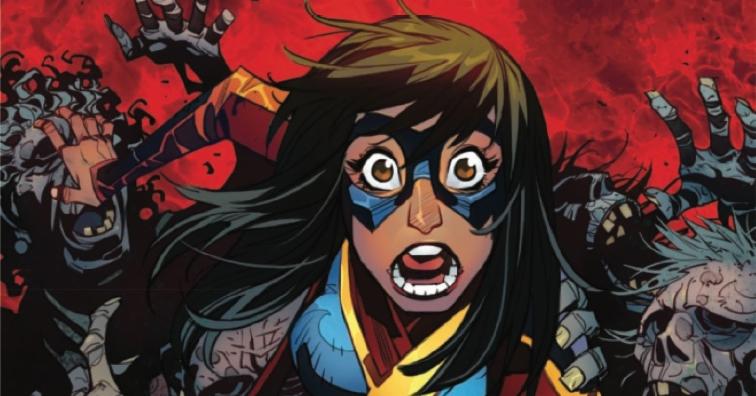 Kamala’s day off has turned into a zombie apocalypse! Where are all these zombies coming from? Will she be able to save her friends from Lockdown and Discord? From Saladin Ahmed, Joey Vazquez, Alex Arezmendi, Ian Herring, and Joe Caramagna comes the next thrilling chapter, The Magnificent Ms Marvel #8!

A New Foe In The Magnificent Ms Marvel #8

The Magnificent Ms Marvel #8 begins with Ms Marvel standing down to save her friends. After inhibiting Kamala’s powers, Josh and Becky take them to their boss who they call Uncle Brett. Thanks to her new suit, Kamala breaks free of the inhibitor and easily defeats Josh and Becky. But when she turns to face Uncle Brett, he grabs her hand and puts her into a trance. Luckily, Zoe snaps her out of it and they make their escape.

Kamala races through the woods but just as she stops for a break, Josh and Becky catch up. Once again, she fights them off but almost kills Josh when she loses control of her suit. Suddenly, Uncle Brett confronts them, transforming into a monster made up of his victims and calling himself Monopoly. He tries to absorb Kamala but she bursts out of him, freeing the rest of his victims in the process. Police restraint Josh and Becky but not Uncle Brett because all his employees signed release forms. As they drive home, Kamala reflects on their day and the questionable actions of her new suit.

The Abundance Of Enemies

The Magnificent Ms Marvel #8 brought the zombie story to a close a bit sooner than expected. That being said, I’m sure that it will have lasting repercussions on Kamala and her story. First, Monopoly remains at large, making it likely that he’ll reappear. We may not know much about him but I think he could make an interesting villain. Second, even with Becky and Josh heading to jail, I doubt we’ve seen the last of them. With Josh threatening to kill Ms Marvel, chances for redemption look pretty bleak. But if he finds a better mentor than Monopoly, maybe he can get back on the right track.

Speaking of unexpected turns, the Kree nanosuit becoming murderous came as a surprise. While the suit seems to have a mind of its own, could it actually be sentient? It didn’t appear to be acting on its own last issue, but maybe it has some sort of corrupting influence over Kamala. Or perhaps it’s still being controlled by its former Kree owner, who we know so little about. Whatever the explanation, Kamala might have to return to her old costume if this one can’t be trusted.

Moral Crisis On The Horizon?

In The Magnificent Ms Marvel #8, we see Kamala go a little too far. As cool as her slingshot move was, Kamala could’ve seriously injured Becky. She also squashed Josh’s suit with him in it. Thankfully, Zoe was there to help pull her back. Still, Kamala is clearly shaken by what she did to Josh. While it isn’t really her fault, she probably feels guilty about Josh’s situation.

Now that she almost killed him, she may really begin to doubt herself going forward. I hope she’ll pull herself back to the light, but things may get worse before they get better. But first, she might just have to ditch the Kree suit and see how it goes.

Kamala vs. The Lean, Mean Zombie-Making Machine In The Magnificent Ms Marvel #8

The Magnificent Ms Marvel #8 brings us a new villain with a particularly revolting appearance. In his true form, Monopoly takes the appearance of a giant, goopy monster. Even worse, his victims’ horrified faces appear all over his body. Like the zombies, Monopoly’s monstrous form features gaping mouths, eyes wide open, and a drool-like substance. We may not understand how his powers work, but Monopoly’s look induces absolute disgust.

The sequence that truly shines, however, is Kamala’s fighting her way out of Monopoly. Dark colors swirl around Kamala like a lava lamp trying to overtake her. Even gutters have been converted, appearing as wavy lines. But in a burst of light, she breaks free, sending the other souls flying. These stunning panels showcase Kamala’s power and perseverance. It echoes her fight against Deathbringer a couple of issues ago, making Kamala the literal light in a world of darkness. She nearly crossed a line, but she is still a hero and she will overcome it in the end.

Next Stop: Who Knows?

In The Magnificent Ms Marvel #8, Kamala stops Josh and Becky and revives the zombies. But with Monopoly still free and the new costume’s motives in question, this remains a hollow victory. Can she keep using a suit that she doesn’t trust? What will Monopoly do next? Is Josh too far gone or can he still be brought back to the light? We’ll have to wait and see!

The Magnificent Ms Marvel #8 by Saladin Ahmed, Joey Vazquez, Alex Arezmendi, Ian Herring, and Joe Caramagna
An Exciting Escapade!
This issue is full of adventure and drama! Kamala faces off against old and new villains, but now she must prepare to face an even bigger threat: herself. Well, that and her possibly murderous Kree nanosuit. This mini arc was very fun to read. It also stays fairly self-contained while leaving enough loose ends to set up future storylines. I can't wait to see what happens next!
WRITING
98
ILLUSTRATIONS
95
ENJOYMENT
100
PROS
CONS
98
Pass Go!