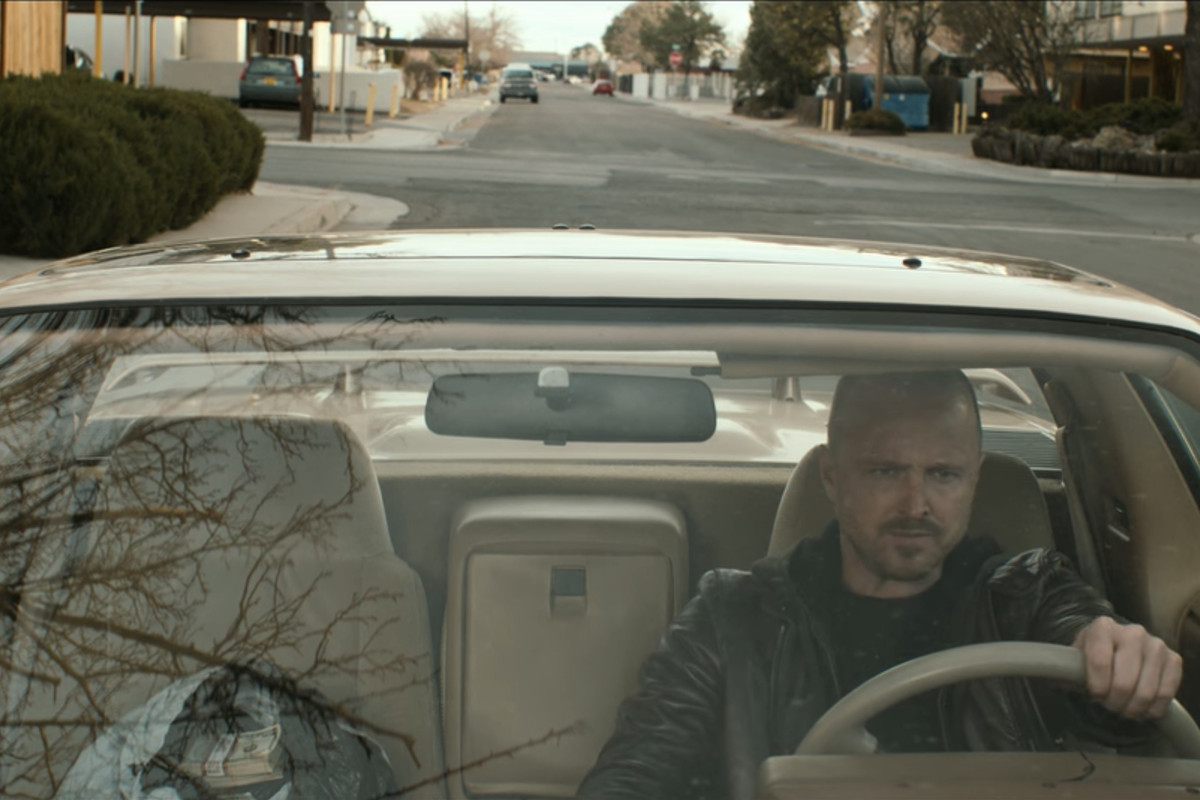 Breaking Bad premiered eleven years ago and made a household name out of creator Vince Gilligan. The show was an awards darling and made us look at Brian Cranston in a whole new light. Even though it ended six years ago, Gilligan has returned to tie up one more loose end: What happened to Jesse Pinkman (played by Aaron Paul)? The result is El Camino, a two-hour coda that fills in those gaps and meditates on how Jesse has evolved.

Warning: This review will contain spoilers.

El Camino follows Jesse Pinkman in the days after Walter White freed him from the White Supremacist compound where Walt died. Unable to shake the trauma of being held captive at the compound, the story is told with frequent flashbacks. These flashbacks include both his time with his captor, Todd, and memories of time spent with other people who were important to him.

El Camino Grapples With The Legacy Of Breaking Bad

The finale to Breaking Bad left most viewers satisfied. It allowed Walter White to go out in exactly the way that he wanted: literally guns-a-blazing. As NPR television critic states, however, in hindsight the ending allowed Walt to have all the power, despite the many terrible things he had done to others. This movie feels like a step back from that by showing the consequences of Walt’s actions play out through Jesse.

In some ways, it puts right the gratuitous suffering Jesse went through in the final season of Breaking Bad. This plotline was my only real complaint about that season. Forcing Jesse, the heart of the show, to become a literal slave to a group of white supremacists felt a little too much to me. While this doesn’t lessen that, it allows it to feel less like making Jesse suffer for the sake of it. El Camino is a sharp character study, and a task Aaron Paul is more than up to.

One of the most satisfying things about El Camino is how Jesse’s interactions with other characters are juxtaposed against one another. When he returns to the home of his friend Skinny Pete, we see the paternalistic care of his friend. Skinny Pete gives Jesse something to eat and a shower, without thinking. In one touching moment, he hands Jesse his own beanie in case it might help him be less easily recognized.

In a flashback, we see Jesse’s interactions with Todd, his captor, and his failed attempt at acting in the same paternalistic manner. He lowers a cigarette down to Jesse in his cage with a string and a binder clip. He offers him soup in his apartment after he brings Jesse there to help clean-up a dead body. When Todd takes Jesse out of the cage to do this errand, he spits on his hand to smooth out Jesse’s hair and promises to keep him cleaner in the future.

We also see the impact Jesse’s mentors had on him. With cameos that, thankfully, don’t feel forced-in, we see what Mike and Walt think Jesse should do with himself. As with the other sequences, these flashbacks are placed strategically to juxtapose the characters against one another. Mike, at first, refuses to play along when Jesse asks him what he should do with himself. “It doesn’t matter, I’m not you,” he says before relenting. While Walt, in his own flashback, pushes Jesse to do what he himself would likely do (go to college). A final flashback with Jane in the last minutes of the movie reminds him,

“Sometimes it’s better to make those decisions for yourself.”

The scene that feels the most in-tone with Breaking Bad is Jesse’s confrontation with Ed, a mysterious man who owns a vacuum cleaner shop as a front to help criminals disappear. Aside from being a fun callback, Jesse regains his old motormouth swagger. We also get some of the biggest laughs in this sequence, as Jesse first tries vainly to get him to admit his side-job, and then as he tries to call his bluff when Ed calls the cops on him.

Sadly, the actor who played Ed, Robert Forster, passed away on the day the movie was released.

It’s the addition of two new characters that perhaps weigh the film down the most. In order to get out of town, Jesse searches through Todd’s abandoned apartment for money he stashed away. In the process, he runs into two shifty operators who have come for the same purpose.

Later, after realizing his split of the money wasn’t enough to get him out of town, Jesse confronts these men. This is where El Camino slightly falters, as it hits the Western note a little too on-the-head. Jesse and one of these men engage in a literal old-school shootout. While Breaking Bad never shied away from hinting at the Western motif, El Camino plays it a little too straight.

If the pacing feels a bit off, or the sequences feel a little long, it is likely because it feels more like two or three episodes of television stitched together. Instead of the classic three-act movie structure, it felt more like a series of five-act television episodes. This is not to say that any particular sequence felt like it overstayed its welcome.

This structure works to the movie’s benefit. The continuous use of flashbacks, for example, could have felt jarring. Instead, it felt like they were deepening the narrative without necessarily actively pushing the plot forward. The cameos could have felt forced, but instead, build on each other to further Jesse’s character development.

El Camino Feels Like Breaking Bad In All the Right Ways

When Breaking Bad premiered, no one had ever seen anything like it before. The editors have talked on the show’s Insider Podcast about being hired for other shows with the presumption of getting that signature look. The bold use of color, wide shots, timelapse, and unique lighting were all elements that made the show come alive. When it ended, much of the crew seamlessly transferred over to the spin-off series Better Call Saul.

If Breaking Bad was shot in a way that was rough around the edges and unpolished, Better Call Saul has ironed out some of the kinks and is smoother and more tightly focused. El Camino, surprisingly, feels more like that later than the former. This isn’t a bad thing, in many ways, it helps to keep both the pacing smooth and the tension high. That said, all of the unique stylings that made Breaking Bad so special are all on display in El Camino. This isn’t surprising, of course, as much of the crew for the two shows has returned for the film.

Building On Instead of Cheapening

El Camino is a masterclass in narrative storytelling that builds on Breaking Bad. There is a trend right now with reviving television shows. Many revivals have lost the magic of their originals, as once timely shows have now feel tired, or unnecessary. While not technically a revival, El Camino builds on the ending of Breaking Bad without cheapening it. Instead, it deepens our understanding of the characters. While the pacing can feel a little bit askew, and some of the notes a little on-the-nose, it nevertheless provides a satisfying (double) conclusion to this universe.

El Camino Brings Breaking Bad Back To Life
El Camino brings the audience back to the Breaking Bad world without feeling tired or unnecessary. It provides a satisfactory (new) conclusion to the series and has enough cameos to satisfy without feeling forced.
WRITING
8.5
CINEMATOGRAPHY
9.2
DIRECTING
9.3
Reader Rating0 Votes
0
PROS
LOOKS AND FEELS LIKE BREAKING BAD
ENOUGH CAMEOS TO SATISFY
AARON PAUL BRINGS IT
CONS
PACING FEELS LIKE A TV SERIES RATHER THAN A MOVIE
9