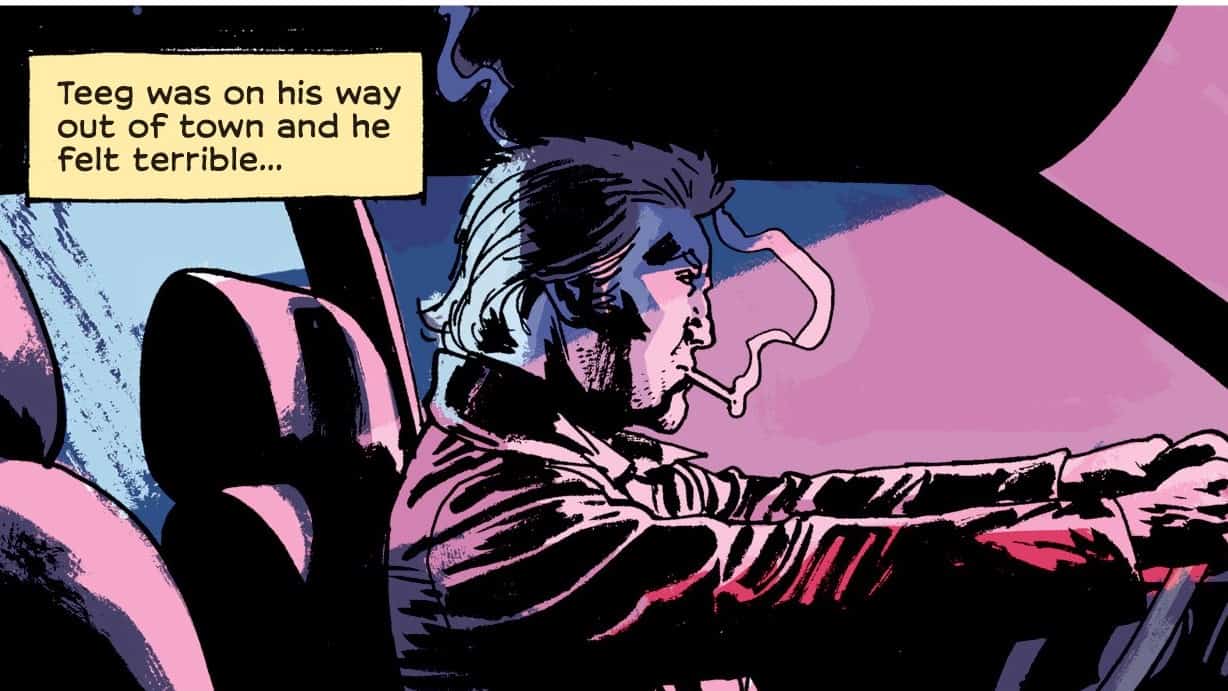 Criminal #1 revives an old but classic series by the creative duo of Ed Brubaker and Sean Phillips. True to Brubaker’s original vision, you can pick up this comic without any prior knowledge of the series. Criminal is envisioned to be a crime noir comic that features a cast of rotating characters. While characters from the previous comic show up, Criminal #1 establishes everyone effectively enough that you don’t feel like you have missed anything.

To quote the late great Stan Lee, “Every comic is someone’s first comic.” Brubaker and Phillips delivered on that statement. As someone who has been a fan of the creative duo for many years, but strangely never picked up Criminal, I can attest to it. In addition to keeping their word, Criminal #1 has the feeling of their past works which is a massive plus.

Ed Brubaker is a master of the Noir genre and crime fiction in general. This story is nothing new to him, but the sheer skill he portrays in it is what makes Criminal #1 amazing. Noir is a genre defined by a morally questionable but likable protagonist that makes awful choices in an attempt to get out of the hell made of their life. Teeg Lawless is exactly that, but what is nice is that we don’t focus on him first. We actually get to know Teeg through his son, who sets up the conflict of the issue. Brubaker has stated that this series is in many ways about fathers and sons, so introducing an audience new to Criminal to Teeg via his son was a great way to display this.

Brubaker’s love of third-person narration really fits with the story. While in many ways it’s the story of a screwed up father trying to correct his son’s mistake, it also feels like just another piece of a larger puzzle. The Lawless family is usually at the center of Criminal stories. The audience gets the feeling of that via this narration. In the end, said narration spells out two things that Brubaker is trying to do with this series quite well.

It makes you really feel that you just read a snippet of a larger picture, which is something Brubaker wants to emphasize. He is not writing for the trade, he’s writing a comic so that means stories won’t always be an arc, something both him and I miss from older comics. Second, it displays a major theme of all Noir stories that our choices have to an through, otherwise, they can end up with dire consequences.

Sean Phillips & Son At Their Best

I met Sean Phillips a few months ago, and he told me it’s very hard to draw people in hats. Well, I have to say he makes it seem so seamless. His period-accurate clothes and expressionistic characters do a lot to help Brubaker’s fantastic script. These guys have been collaborating together for twenty years, I bet they can do stuff like this in their sleep they are so good at it. Phillips’s art, as always, is the right mixture of gritty, moody, and stylized to fit the tone of Brubaker’s writing.

The only problem I have ever had with Phillips art is that sometimes he repeats character faces for minor characters. This can be distracting, however, thankfully this doesn’t feature in Criminal #1. His son, Jacob Phillips, is the colorist. Quite fitting considering the theme of the story. Jacob is a good colorist, and I can tell he learned from the best. In my opinion, the best Phillips art ever looked colored was in The Fade Out with Elizabeth Breitweiser doing some amazing coloring in that comic. Well, in Criminal #1 Phillips’ art has never looked better colored, so I guess it’s true what they say. Like father, like son.

Criminal #1 Is An Excellent New Entry In This Classic Series

Criminal #1 is Ed Brubaker and Sean Phillips firing on all cylinders. Fantastic writing, art, characters, and an intriguing premise. I look forward to many more issues of Criminal as I could always use an experimental, anthology crime noir comic. In many ways, it’s the comic I have always been searching for and finally found.