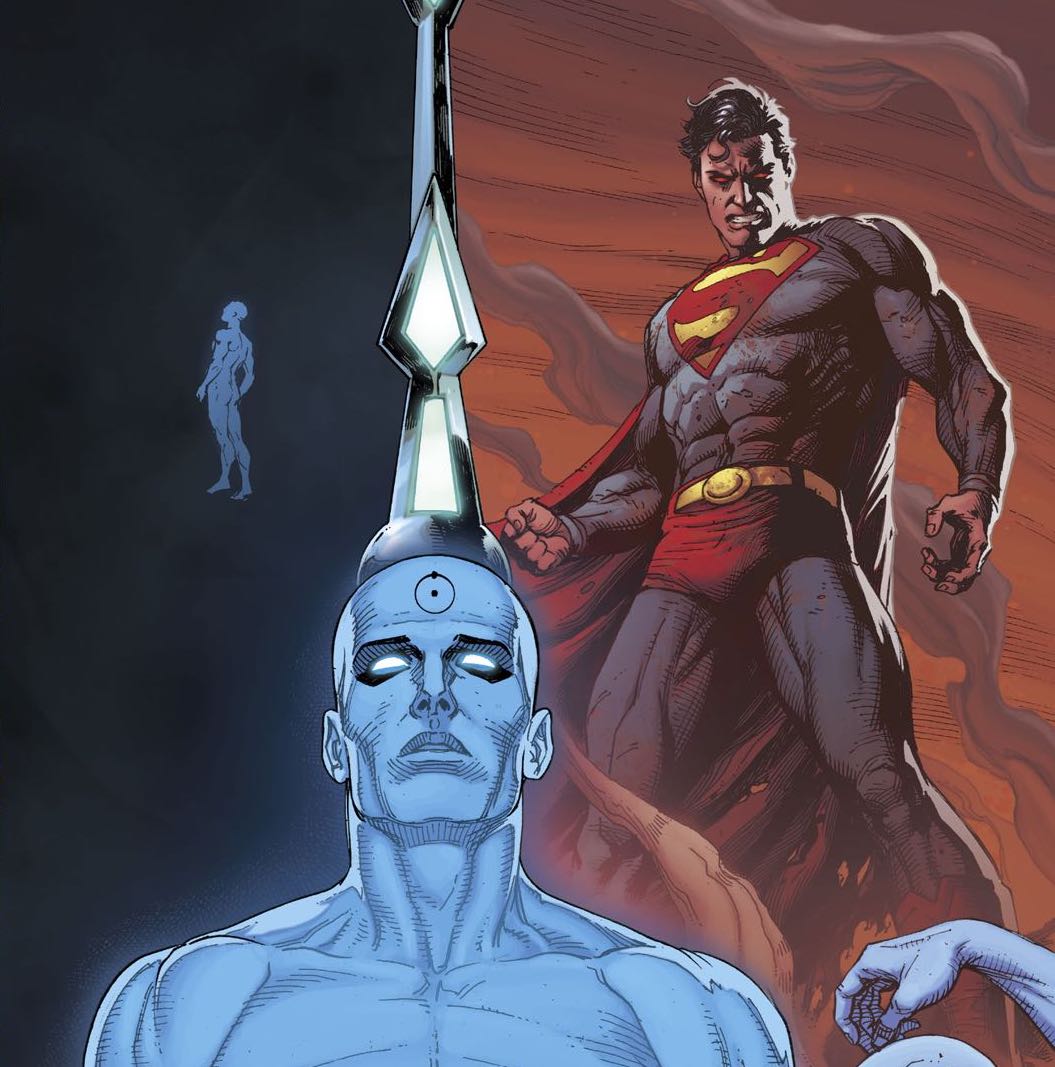 Doomsday Clock #12 Puts An End To The Series

The end has finally arrived. Doomsday Clock has come to a conclusion after taking over two years to complete after multiple delays. Geoff Johns and Gary Frank saved the confrontation between Superman and Dr. Manhattan, the moment we have all been waiting to see, for last. With many storylines needing to be capped and explained along with the meeting of these characters, many wondered how Johns was going to cram all of these storylines in a single issue. Johns handled it as best as he could, I guess. Most of Doomsday Clock #12 is Dr. Manhattan undoing all the changes he made to the “metaverse” in the New 52. With the remaining storylines being shown briefly here and there, and what felt like a rush job in putting them to bed. The Doomsday Clock series has been a long journey.

With promises of drastic changes to the DC universe and an epic clash between the Watchmen and DC heroes, the hype was high. Though every individual issue of the series was decent, I’m not sure how the series as a whole will be viewed. The Watchmen is considered one of the greatest comic book series ever written with a large fan base who loves it; The Watchmen will be remembered forever. I don’t think the same will be said about the Doomsday Clock. Maybe once the entire series is in paperback, and you can read the entire plot at once that will change. But for now, the series feels like a lost opportunity.

The meeting between Superman and Dr. Manhattan has been building up for twelve issues. Dr. Manhattan cannot see beyond this meeting and is not sure whether that means Superman will kill him or Dr. Manhattan will end everything. A global metahuman war is taking place around them and Manhattan explains to Clark how he is responsible for all the changes in the universe that took place in the New 52. Dr. Manhattan even mentions his role in the death of Clark’s parents.

Clark grows enraged at this point and charges Manhattan. However, Clark was only fending off an incoming attack by another metahuman. Clark raises a third possibility as to why Dr. Manhattan sees nothing after their confrontation.

“Maybe the darkness you see… maybe it takes everything you have to save your world.”

It is at this point where Dr. Manhattan does not end everything but changes everything.

Dr. Manhattan restores the multiverse with the return of the Legion of Superheroes and the Justice Society of America. Clark’s parents being killed in a car accident changes to Clark stopping the car before impact. Doomsday Clock #12 for most of the rest of the issue is shots of different timelines where Superman arrives. Timelines and hints at future events to come in the future. Timelines including an event referred to as “time masters” in the year 2025 and even a “secret crisis” event in the year 2030, crossing over DC and Marvel Comics. I highly doubt most of these are really planned yet and assume they are just hopeful thinking on the part of Geoff Johns.

As for The Watchmen universe, the characters were returned to their universe. Ozymandias was put in prison for his crimes. The Comedian again plummets to his death at the hands of Ozymandias. Mime and Marionette have a daughter, and Jerry Long is seen at the grave of Byron Lewis. As for the lost son of Mime and Marionette, Dr. Manhattan raises him as a child. Dr. Manhattan eventually empties his powers into the child fading away.

The Art Team Of Doomsday Clock #12

The art team of Gary Frank and Brad Anderson has been the overwhelming strength of the series. Doomsday Clock #12 was a pleasant treat in particular. Through the series, the team has mainly stuck to their 9-panel grid formula. Doomsday Clock #12, however, though containing a few 9-panel pages, allowed for more splash and larger panels. Frank and Anderson showed off their talent to an even greater extent in this issue and it would have been great to see this throughout the rest of the series.

Gary Frank’s art is far superior to most other artists in the field. With the amount of detail and number of panels, delays should have been expected. The art of the Doomsday Clock series is the top reason why if you are considering reading the series you should.

What Did Doomsday Clock Bring?

I stated earlier Doomsday Clock felt like a missed opportunity. With all the hype of an epic clash between these two great universes it felt like Johns played things safe. Geoff Johns seemingly returned everything back to the way they were before the New 52, without anything controversial or truly impactful coming from it. Yes, the return of the Legion of Superheroes and JSA is significant but, was this massive twelve-issue story necessary for them to be brought back? I give Johns and Frank credit. This challenge was not a small one, and greatness was expected. Go big or go home right?

It just doesn’t feel like they went as big as they could have. In my opinion, the team spent to much time trying to follow the “rule book” of The Watchmen and Alan Moore. Of course, they had to respect the original story and team but, I would have liked to see them make it more of their own. Doomsday Clock was an interesting series and one person will talk about. There will be people who love and people who hate it. After two long years, it is finally over. We can now go back and reread it all at once and see if it comes off any different. Maybe without the delays leaving sour tastes in the mouth it will be more enjoyable. How will the series be remembered? Ask again in a few years.