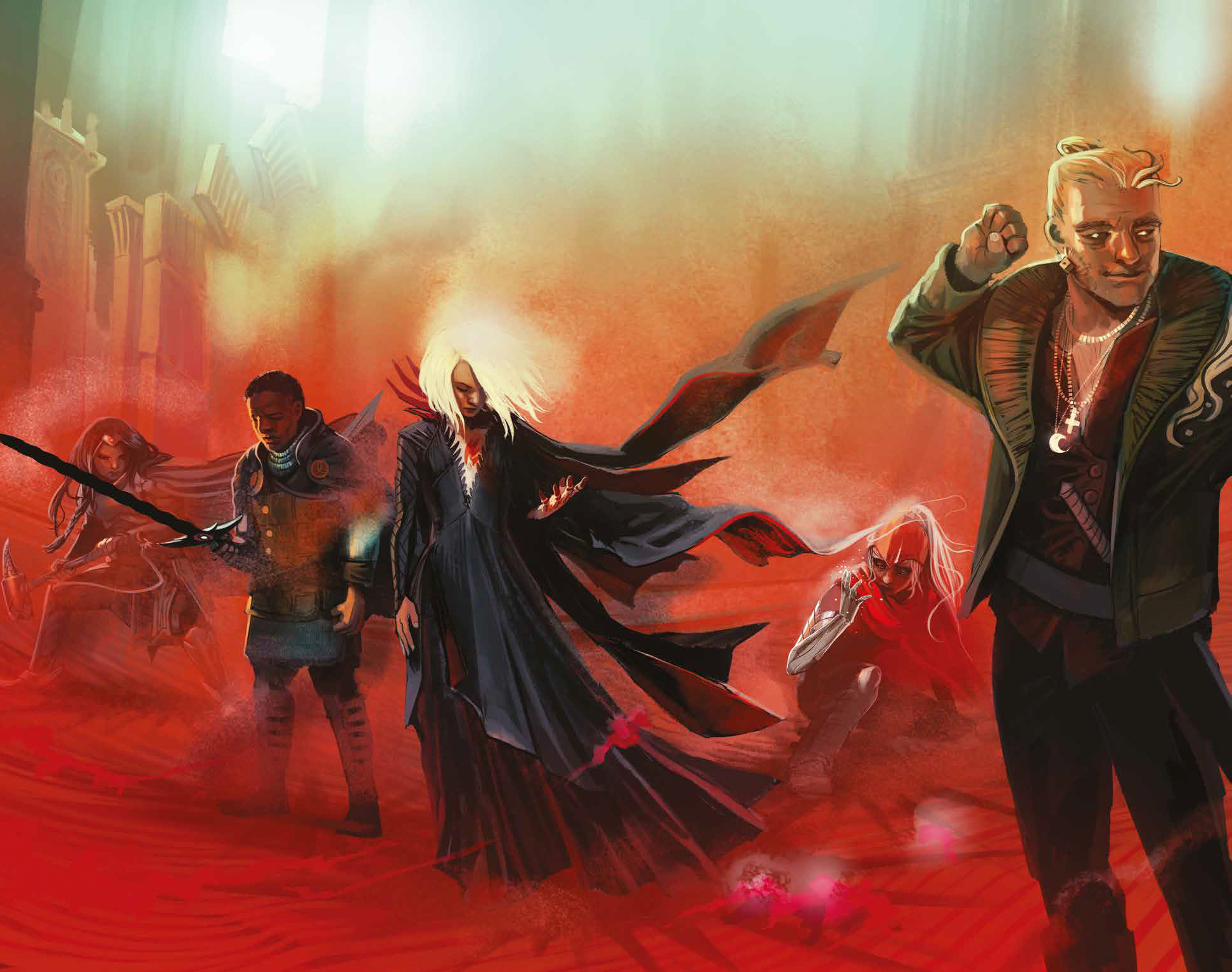 DIE Volume 1: Fantasy Heartbreaker collects the first five issues of a story that has affectionately been called “Goth Jumanji.” DIE features the combined talents of Kieron Gillen, Stephanie Hans, Clayton Cowles, Rian Hughes, and Chrissy Williams. The team serves up a titillating blend of horror, fantasy, and drama. In 1991, six teens sat down to play a game. Two years later, they came home. Now, as grown adults, the game calls for them again, beckoning them to roll initiative.

The release of Fantasy Heartbreaker marks the real start of DIE as a series. With the launch of the trade paperback comes a tabletop roleplaying game attached to the property; the beta version, at least. DIE Volume 1 includes a bit of information on the game, variant covers, character design sketches, and short essays from the team. It’s an absolute treasure trove of bonus material for anyone who really wants to sink their teeth into the world of DIE.

The story itself is fun, dramatic, and horrifying. Gillen sets out to destroy all the appeal of Dungeons & Dragons. But in doing so, he just makes us want to pick up a d20 ourselves.

The essays on the back of DIE Volume 1 are an incredible resource. Kieron Gillen’s thought process reveals a lot about the nature of the series and its symbolism throughout. On the topic of DIE‘s relationship with other fantasy works, Gillen says,

We are taking you to a fantasy world, but it tries to reject pastiche. We are simultaneously a deconstructionary critique of Fantasy, while also trying to create something so vibrantly pure as to remind people why anyone fell in love with the idea of there being a land at the back of the wardrobe in the first place.

INTO THE DUNGEON, Kieron Gillen

The deconstruction of DIE lies in the horror. The entire appeal of tabletop roleplaying is the ability to insert yourself into a fantasy world. Step through the wardrobe into Narnia and become something greater than yourself. When you sit down around that table, you’re part of something bigger. You’re someone important, a hero.

But what if you’re not? What if you wake up in Hobbiton in the middle of a drought, and you starve to death with all the other hobbits? What if the unicorn runs you through on her horn? Maybe you’re not the hero at all, but the quarry? You weren’t brought here to save the world, but to entertain its God. That’s the twist that DIE pulls, playing on the inherent horror of being out of control.

The Horrors Of Youth

As the players are thrust back into the fantasy world of DIE, they reawaken and relive all the horrors and trauma of their childhood. In fact, the world around them serves as a metaphor for traumatic youth in general. Their environment was sculpted by Sol, an old friend, and former dungeon master. As such, it’s populated by a teenager’s idea of badass fantasy.

Dragons are made of clockwork. The gorgeous elf queen resembles the most popular girl in their class. The girl’s childhood diaries become holy texts, and she reads them aloud before a congregation. Everything is at once familiar and foreign to the characters, like a bathroom mirror in the dead of night. It reflects reality, but you can’t see every little detail. Your imagination fills in the rest.

Down The Rabbit Hole

Issue five of DIE sets a dark tone for the rest of the series. Ash shows off their emotional manipulation powers, deceiving an entire city. The team destroyed the said city in a manner of minutes in order to draw out Sol. And with their former best friend finally dead, the team is ready to head home. All they have to do is hold hands and tap their heels together and poof, back to Kansas they go.

There’s only one catch. First of all, not everyone wants to go home. Why would they want to? Here they’re heroes and legends. Back home, they’re nobodies. Sol sits up. He’s still dead, don’t get me wrong, but he’s beyond dead. He’s a Fallen, one of the ghoulish level-one baddies we’ve seen the team plow through, no problem.

Implying that all of the supposedly morally unconscious Fallen they’ve been fighting up until now are just like them. Just kids, sentenced to this fate by no fault of their own.

How Is DIE Volume 1 Still Fun?

Despite everything from the dark tone to the grim set pieces, DIE Volume 1 is undeniably a fun read. This is in part due to the incredible visual work of Stephanie Hans, Clayton Cowles, and Rian Hughes. Hughes’ graphic design work is present throughout, most notably in the unrolled d20 that serves as the series’ logo. His work is stylish and modern and lends a distinct edge to the comic. Cowles’ lettering is expressive, with wobbly balloons and distinct color-work to portray different emotions, tones, and speakers.

And of course, there’s Stephanie Hans. Hans’ work is painterly, delicate, and grotesque all at once. Her attention to color stories throughout DIE Volume 1 brings each issue together in an incredible way. Characters are identifiable, readable, and expressive. The strongest point in Hans’ favor is her manner of crafting atmosphere. The hazy, concept art-style quality of her art adds to the mystery and danger of the world of DIE.

DIE Volume 1: Fantasy Heartbreaker is presumably one of my favorite comics on shelves right now. With a perfect blend of fantasy, horror, and real-world drama, DIE captures the imagination in a truly profound way. Whether it makes you want to break out a character sheet of your own, or curl up under your blankets and hide from the trauma of your own youth, DIE is sure to affect you in some meaningful way.