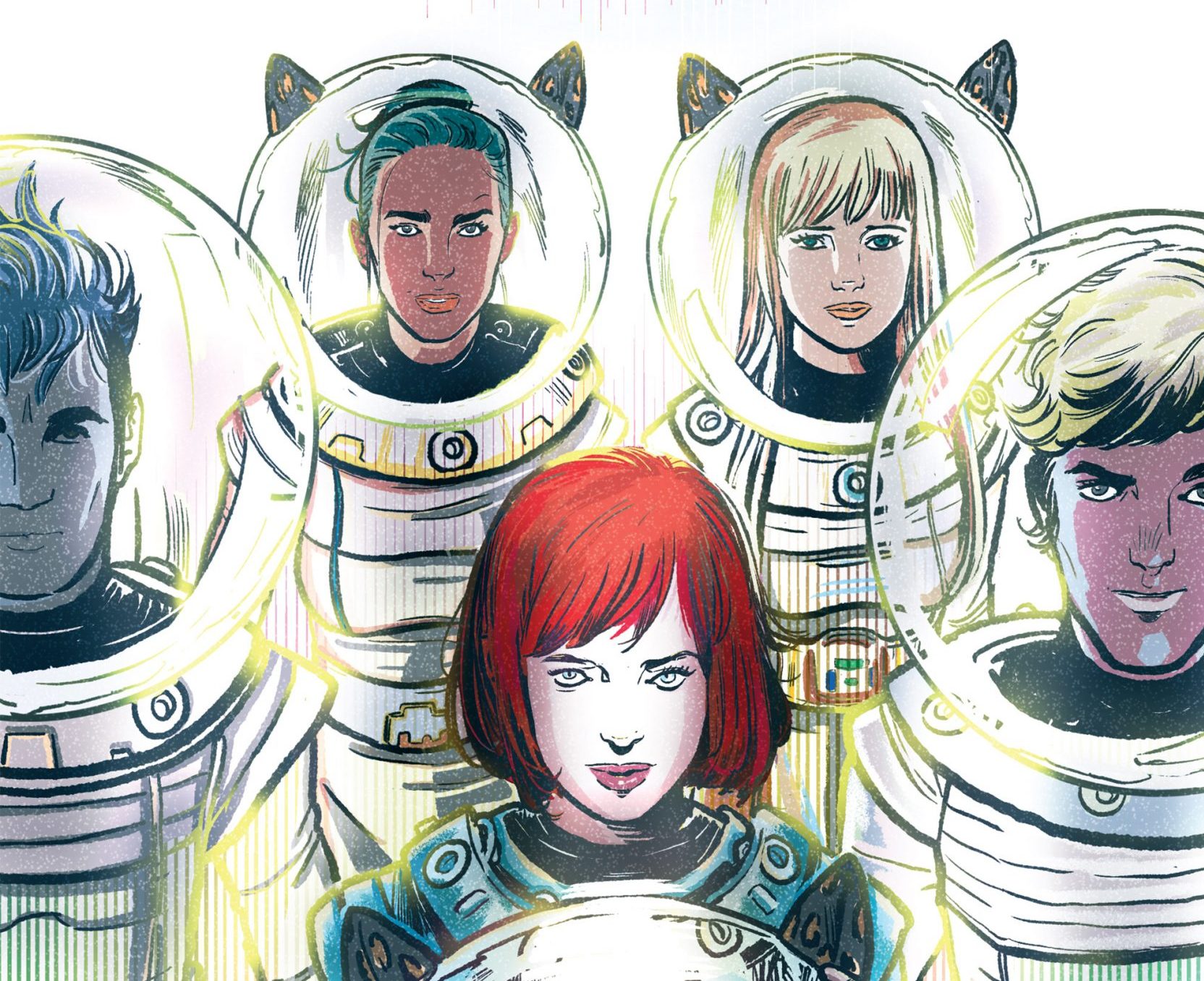 Get ready for another exciting trip into deep space with Josie and the Pussycats in Space #4. This comic is action-packed from beginning to end with horror imagery everywhere. As that sounds like an amazing issue of a comic, it’s actually a bit of the book’s downfall. Most comics need slower moments within an issue to move the story along. Without these moments an issue can get a bit clunky, but let’s not get ahead of ourselves though.

We last saw the survivors in Greendale about to be rescued. As they fought the murderous alien one last time, it looks like the worst part is over. Until readers find out that the alien snuck aboard the group’s last escape pod. What will happen next? Well, let’s take you on another deep space adventure with the pussycats in Josie and the Pussycats in Space #4.

A Galactic Plot In Josie In The Pussycats in Space #4

Josie and the Pussycats in Space #4 begins with the survivors of the Greendale traveling to a rescue spaceship in an escape pod. As they all begin to decompress about all the events that just occurred, the pussycats begin to feel a bit paranoid about the situation they are in. Suddenly, two frozen passengers saved from the Greendale wake up and begin to attack everyone. They come to realize that the alien has possessed the two bodies. The rest of the crew decide to lock Josie and the Pussycats in the ship’s cockpit and fight the alien themselves.

During the battle, the ship’s power goes out. Valerie decides to do the best she can to fix the ship herself. In succession, she is able to get everything functioning again and sends a distress signal to Space Officer Alexandra Cabot. Alexandra decides to save the crew by doing a spacewalk with them to her ship. As the spacewalk begins they are shocked to see the alien thought to be dead reformed. Everyone looks in horror as it looks like their fates are sealed.

Can’t Breath in Josie And The Pussycats In Space #4

This new issue of this series is another mixed bag for comic book fans. The comic starts right off the bat and doesn’t let the reader take a breath. It’s full of excitement and action throughout that makes the issue a page-turner. As these can be good features in any comic book, it doesn’t work too well in this issue. Almost every issue prior has stuck to a formula that hasn’t been strayed away from. The books usually start off strong, gaining momentum for the climactic cliffhanger.

There are moments in the issues that slow down and try to flesh out the characters as well as moving the story along. This issue is nonstop action and doesn’t stop, at moments that feel like it should slow for a bit it doesn’t.

At the beginning of the issue, Josie is feeling paranoid about the events that just occurred. This could have been a great moment to slow things down for a bit. Everyone could have a moment to debrief and readers could get a sense of how everyone feels, but sadly this issue doesn’t give time for this. The comic gives a few panels of everyone debriefing and then the alien attacks.

With the little panels given for this, it feels like they only felt safe for a few seconds. It’s unclear why the writer rushed a moment of peace for the character, but let them gather their thoughts before they have to fight again. There is even a death added to this issue and the book rushes through it as well.

It could have led to a great interrogation scene. Adding a slower scene like a debrief or an interrogation would have made this an important chapter in this story. With the issue only being an action piece, it feels a bit pointless. Like there needed to be another mishap to make the series a bit longer. There is so much potential and it feels like this series is not using them correctly and is giving a mixed bag of a story to Josie and the Pussycat fans.

Previously in the series, it was revealed that Melody suffers from anxiety and panic attacks. Issue two did a phenomenal job portraying the condition and how to help someone with the condition. Sadly, this wonderful moment was short-lived and feels meaningless with Melody acting like nothing happened a few scenes later. Since then, some fans have been interested in seeing if this will ever be mentioned again. Well, it came back and sadly doesn’t portray the condition well at all. During the scene where Valerie is fixing the ship, Melody has a panic attack and is visibly shaken. Josie then comes to her rescue to calm Melody down as she did previously. The moment is cut short though because it’s in the middle of an action scene.

With Valerie trying her best to fix the ship and people dying, it’s a bit much to then add Josie trying to help Melody. The last time this occurred was after an action scene. As everyone else debriefed, Josie had a heart-to-heart conversation with Melody. It worked well because the scene was timed well. In this issue, the moment feels forced almost as if Josie is trying to calm her down in the quickest way possible. If Melody was just in petrified shock and couldn’t move while all of the events occur it would have worked. It feels like giving this condition focus during an action scene. Hopefully, the next issue will finally have a great pay off and portray the condition in the right light again and not use it to make the scenes more intense.

Alexandra Cabot is a classic Josie and the Pussycats character that any fan knows by heart. In this series, she is a first responder in space that tries to help every one of the Greendale spaceships. As she makes a few quips prior to her brother, she seems like a fun character for the series. Now that the situation has become deadly it would seem that she would take the situation seriously too, but she doesn’t. Alexandra is written like she’s seen many things and this doesn’t phase her too much. This is fine and makes her seem like an interesting character, but when the situation gets even direr, it still doesn’t phase her at all. It gets to the point where she seems scarier than the alien. Also, she has a cat that can sense aliens.

Yeah, as odd as that sounds, that’s exactly how the book handles that information. No one questions it or tries to explain this new character. This series keeps trying to add characters into this mini-series and it doesn’t work. These characters seem to be just thrown into the situation because they are legacy characters within classic Josie and the Pussycat comics.

These new versions aren’t explored and it feels like a waste that they’re not explored. If this series was a bit longer maybe readers would have got amazing new versions of classic characters and remind fans how awesome they are. Adding characters like Alexandra seems like the wrong choice at this point in the story. Again, hopefully soon the next issue will wrap everything correctly and get fans wanting more.

How Was Josie and the Pussycats in Space #4?

In the end, Josie and the Pussycats in Space #4 was a very weak point for the series. With a comic being a nonstop action-packed book there needs to be a payoff. If this was the last issue of the series this would work, but it’s not. There is still one more issue and I hope it doesn’t feel as rushed as this issue was. If he took the time to let the characters breathe for a bit maybe it could have been just as amazing as the first issue. Also, I hope new characters aren’t added to the last issue. There is so much potential in this series, but sadly it feels like too many cooks in the kitchen touching the script after it’s written.

It looks like there is a bigger story here, but it feels like the script keeps getting altered and then altered again to fit five issues. Again, the issue wasn’t the worst, but it could have been better if it slowed down a bit. Now that it’s the last issue, the writer needs to write another action-packed issue. Hopefully, it will work better and resonate with fans as the first issue did. As we eagerly wait to find out what happens to the survivors of the Greendale let’s pray that this series ends just as well and doesn’t get lost in deep space.