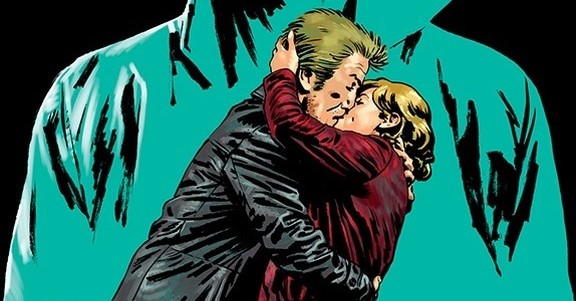 The arc entitled “Cruel Summer” continues in Criminal #7. The arc is intended to explain how Teeg Lawless died, a mystery that has been mentioned several times throughout both volumes of Criminal, due to the non-linear nature of the series. I was mistaken before when I mentioned that it was a three-issue arc, as Ed Brubaker himself has stated it will end at Criminal #12.

These past three issues have each focused on the three major players in the arc that have interacted with the mysterious Jane. Criminal #7 takes a look at Ricky Lawless, a man last seen in this series as a lost man, angry at himself and the world. But that is the future, what causes him to go down that path?

Ricky Lawless has not had a great life. His father is neglectful, a criminal, and a drunk. His mother was also an alcoholic and drank herself into an early grave. Even in his teenage years as he is here in Criminal #7, he has all the hallmarks of the grown-up Ricky that we know. He is angry, both at others and with himself. He’s impulsive, and despite knowing that his actions have consequences, he decides to run away from every problem he causes. He is, in many ways, Teeg’s son.

As they say, the apple doesn’t fall very far from the tree.

In the middle of Criminal #7, Sean and Jacob Phillips beautifully render a page that is a common trope, but a good one, of Ed Brubaker’s storytelling style. There is a splash page that focuses on a character and the anguish they are going through. Here, it’s Ricky discovering what all children realize eventually, and refusing to truly accept it.

The Characters Of Criminal #7

Teeg is attempting to be something he is not, a kind father, an attentive father, a nice man. At least as far as when he is around Jane, who of course isn’t all that nice herself. Ricky thought that being a Lawless meant being full of anger, enjoying violence, and heavy drinking. A dangerous reputation which served as a comfort blanket. Now that illusion is shattered, and Ricky doesn’t know how to process it. The Lawless name means nothing, and his father is human with faults, just like Ricky.

This all leads to Ricky heading down the dark path that we saw previously. We also get a hint of some other issues that are constant in Ricky’s mind. He may have been raped. He was already a broken man but refused to acknowledge it. Now that the illusion of control that his father represented has been shattered, Ricky must face the truth of what has happened. But just like his father, he runs away.

The Symbolic Meaning Of D&D To Ricky

Feeding into this idea of illusions being shattered is the opening and closing scenes of Criminal #7. We first see Ricky playing a D&D session with his friends, but it quickly spirals out of control. Ricky refuses to play along with the fantasy and acts out. Having been both a GM and a player in several D&D games, I have seen similar scenarios play out.

But instead of just being a bad player, Ricky is doing it because he was living in a fantasy, at least his version of one, and now it’s gone. Teeg and Jane have moved the family to a nicer place, but it feels fake to Ricky. In his eyes, his father has become a pale imitation of what he once was. He doesn’t blame Jane but rather his father for this.

So, like many teenagers confronted with issues dealing with their parents, he acts out. Only now did his friends have to take the brunt of the backlash. This results in the chilling ending of Criminal #7. Ricky wants to be told what was going to happen in the D&D session that he ruined. Not because he is interested, he just wants to feel like he is in the fantasy world again.

But as the narration shows, it’s not working. The land of elves, dwarves, magic and the like is not the kind of fantasy he is after. And his mind wanders to other things that might bring back the illusion of his father and the name Lawless. He thinks about acquiring a gun.

Like the previous two issues, Criminal #7 acts as a mosaic. It’s a standalone story about Ricky Lawless, but it’s part of the grander whole that is the “Cruel Summer” arc. It’s amazing, this creative team is at the top of their game and their recent Eisner win is proof of that. What the rest of the arc holds will be interesting to experience. I do wonder if we will continue to alternate between the three major characters of this arc, or if that was just to set the stage. I can’t wait to find out.