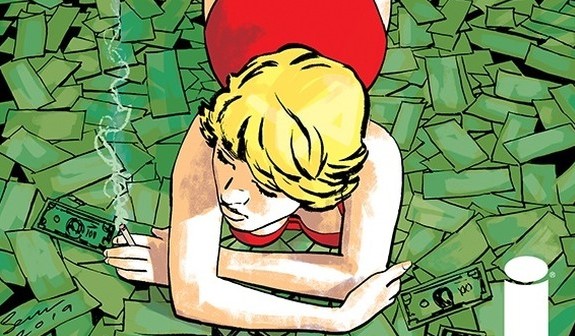 Criminal #8 has finally delivered the chapter of this “Cruel Summer” story arc that I have been waiting for. With each issue of this arc forming a sort of mosaic story, each issue following different characters retelling certain events to form a greater whole, the one constant has been Jane. This mysterious woman has entered the lives of many men and systemically destroyed them in several different ways. So, who is Jane really? Criminal #8 tells us loud and clear.

Criminal #8 follows Jane as she prepares for the big score that she and Teeg plan on hitting in their heist. It’s in the moments where she is by herself that we begin to understand her as a person. In previous issues, she has been this force that wanders into various men’s lives and disrupts them. There has been the implication that she fills the void that these men have been looking for with her lifestyle of carefree sex, charm, and lavish hotels. She runs away into the night, a free spirit. But there have been moments where she seems vulnerable, for instance when locked herself in the closet.

Now, the reason for her constant running becomes clear. Her father was a paranoid drunk who lived out his days in a fallout shelter in constant fear. His fear and paranoia took over his life until he committed suicide in the very bunker that he had built to protect him. He was doomsayer and this combined with Cold War paranoia made Jane a catastrophizer. She is in a constant state of worry and panic which prevents her from being fully in control. The only way to gain that control back is to eliminate the cause, either by running away or by force.

This mentality is dangerous and will only cause more pain as this story arc continues. As we see when she “helps” Ricky kill the man that is implied to be his rapist, she is willing to do whatever it takes. She killed her own stepfather; it doesn’t take much to make someone with that fragile of a mental state to crack.

The Brilliance Of The Phillips Art Duo

In my reviews of this series, I have given nothing but praise to Sean Phillips and his son Jacob Phillips. They make an excellent art team on this book and Criminal #8 shows some rather clever decisions by them that really accentuate the themes of the story. One thing that they do, which I’ve seen in other things but not as effectively, is the overlapping of word balloons and captions.

When Jane is talking to Rhonda, she has no real interest in what Rhonda is saying. She is looking for Ricky and that’s all she cares about. Her catastrophizing mentality means she can’t focus until she has eliminated the problem. Jane’s captions and word balloons overlay and bury Rhonda’s and at times, the word balloons are even cut off at the edges of the page. This really helps you get into Jane’s headspace.

The other thing done really well by them is the removal of background details in certain panels. The reason anyone would get rid of a background in a panel is to make the reader focus on the character as the rest of the panel is nothing but blank space. Sean’s art and Jacob’s colours render a realistic person, while the lack of any background detail forces you to acknowledge the gravity of the situation.

They do this six times. When Jane begins to catastrophize when she suspects Ricky of being suicidal; when Ricky pulls out the gun when Ricky can’t bring himself to shoot; and when Ricky looks at the gun with a sense powerlessness, and finally when Jane kills Lucas. The use of a black background instead of a white background for the last one forces the reader to feel disgust while never showing the murder on the page. Brilliant work.

Jane Gets Her Piece Of The Mosiac In Criminal #8

Criminal #8 was the issue I have been waiting for and it proved to be worth the wait. It was fascinating to finally get a glimpse at the messed up mental state of Jane. The “Cruel Summer” story arc will continue on for a while and is shaping out to be one the series’ best. Ed Brubaker, Sean Phillips, and Jacob Phillips are one hell of a creative team.